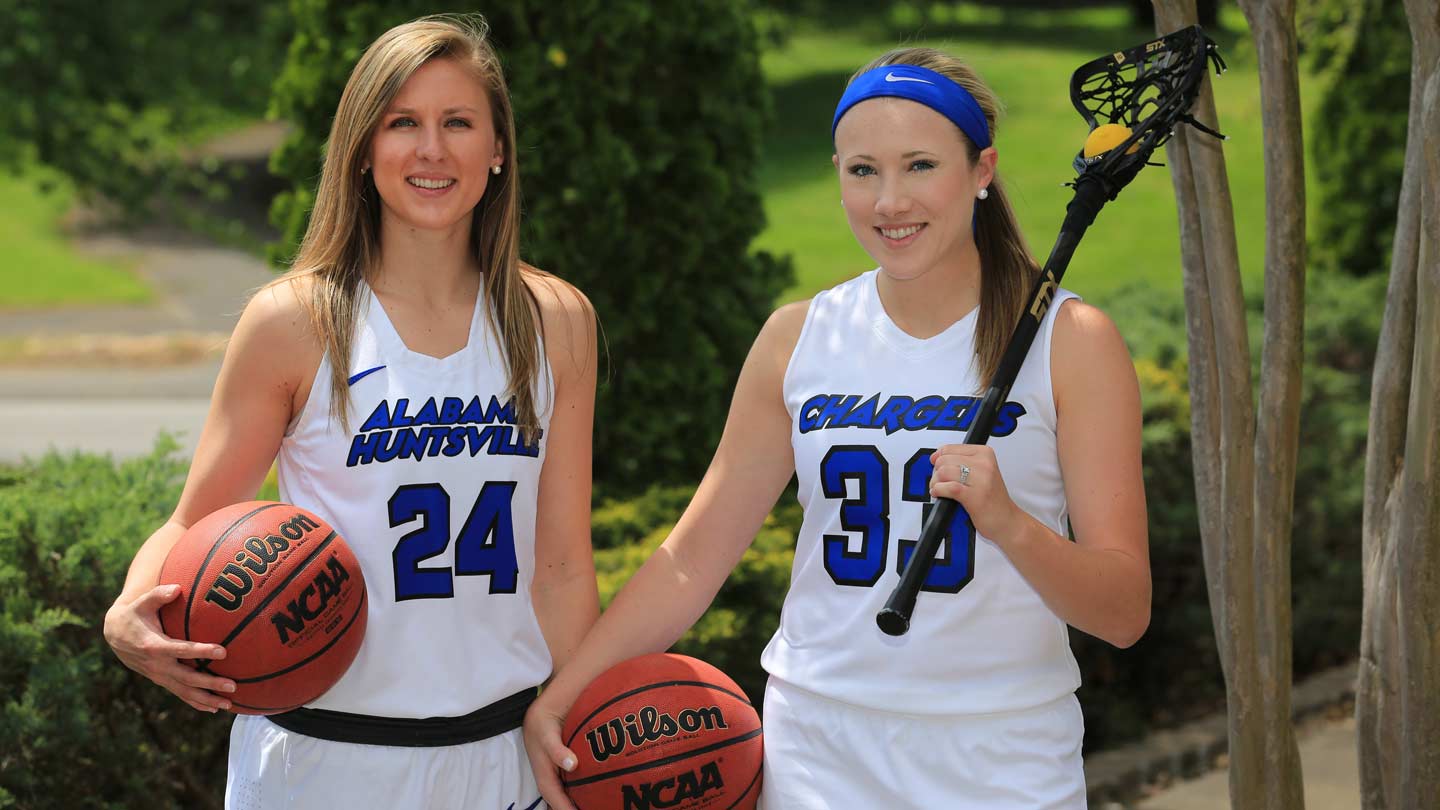 Chandler Elder and Caroline Dodd, UAH graduating seniors were recently honored by the College of Education with the Dodd-Elder Physical Education Major of the Year Award. The award will be presented annually to honor the college’s first two Physical Education graduates.

Caroline Dodd and Chandler Elder, graduating seniors at The University of Alabama in Huntsville (UAH) made such an impression on faculty members, the College of Education named a perpetual award in honor of the students.

"It takes a special person to embrace something new, but both Chandler and Caroline came into the Physical Education (PE) major as our first two declared majors ready for a new challenge," said Dr. Jeremy M. Elliott, Assistant Professor of Physical Education in the College of Education’s Department (COED) of Kinesiology.

"In the time they've been in the COED they have represented the university as student athletes, set a high bar for the work they've turned in, developed relationships with students and cooperating teachers at their field placements, and fully embraced the curriculum to become the best PE teachers they can possibly be. It was because of the example they set that the award was named for them," said Elliott.

The students, commonly known as the "Dynamic Duo" in the COED made the best of their athletic skills in high school to earn full ride basketball scholarships to attend the university.

While Dodd and Elder took different paths getting in the university’s PE program the end result was the same: the two charted an ambitious academic path, and created a high-bar for future students to follow.

Caroline Dodd, a native of Nauvoo, AL, graduated from Carbon Hill High School in 2014. The small town located in Walker County, AL, has a population of less than 300 people.

"I knew early on in high school that playing ball was going to be my free ride to college, so I worked hard at basketball to get a scholarship," Dodd said. "I did not want my parents to carry the burden of having to pay for my education."

Dodd’s high school coaches aware of her talent on the basketball court, and her studiousness as an honors student, graduating with an advanced diploma were on the lookout for scholarship opportunities.

Her original plan was to attend another university, but before she could set foot on campus, the entire coaching staff left the school to work at another institution.

For Dodd’s parents, the roughly182-mile round trip to Huntsville was the equivalent of their daughter moving across country. "My mom definitely was the helicopter parent and she flew pretty low. My dad had a softer approach, but he expected just as much out of me."

For as long a she could remember Dodd dreamed of merging a career as an educator with athletics. "It’s something I’ve wanted for as long as I can remember."

After three years of playing basketball as a Lady Charger, Dodd said she felt spiritually compelled to make a change in her life. "I decided for the first time that I was going to be just a regular college student —no athletics."

Although she "didn’t regret" saying goodbye to basketball, Dodd’s "no athletics" vow didn’t last very long. Within a few weeks she was persuaded by UAH athletics staff and coaches to try lacrosse.

"The first time I held a stick, I was worried. When I held a stick with a ball in it, I was wondering what I had gotten myself into," said Dodd. But within a few short months, with the help of Coach Gail Wallach and her lacrosse teammates Dodd has pretty much mastered the sport. "I will always love basketball the most, but lacrosse runs a very close second."

Honors student Chandler Elder graduated from Bob Jones High School in 2014. The recipient of a full athletic scholarship and a partial academic award, Elder was well acquainted with the university.

"UAH is only about 20 minutes from Madison, so I grew up hearing about the university and my sister graduated from the College of Nursing," said Elder. Ultimately, I decided to attend UAH, because of the athletic program, the College of Engineering, and I was still close to home so I could see my parents and siblings often."

Elder began her freshmen year as a declared engineering major. "But I quickly changed academic programs after taking calculus for two weeks. I remember calling my mom and telling her I didn’t want to be an engineer anymore and we both just laughed because it had been such a short time. I knew that whatever I was supposed to do, I would feel passion for it and I didn’t have that feeling with engineering," Elder said.

She finished her basic course work at UAH as an undeclared major. Elder soon heard the university was starting a Kinesiology program. "It immediately sparked an interest and I knew I was meant to do something within that field.

"I always loved the idea of being able to positively impact others, and after reflecting on the teachers that had such a strong impact on my life, I knew this was something I needed and wanted to do. My declared major is Kinesiology with a concentration in PE," said Elder.

From the moment the "Dynamic Duo" met they have been inseparable. Similar in looks Dodd and Elder were easily mistaken as sisters.

"In our junior year we had every class together, played basketball together, worked together, and lived together. People would always get our names mixed up or mistake us as sisters. Very rarely did you see one of us without the other one. Caroline helped me get through a lot and I am so glad I got to share these experiences with her," said Elder.

"A lot of people might go crazy if they spent that much time together, but I think it was a good balance for us," said Dodd. "The only time we stressed each other out was when one of us had completed an assignment, and the other one had not even started. It was still positive because it was a good motivator to get busy."

Elder and Dodd are grateful to the university, the college and their professors for a rewarding academic experience. "I have not only been taught very well, I have been invested in," said Elder. "My professors pushed me out of my comfort zone and had confidence in me when I didn’t have confidence in myself."

"Each teacher molded me into a better educator and a better person," said Dodd.

Elder and Dodd agree Dr. Jeremy "the PE guru" Elliott played the larger part of shaping and challenging them as future educators, but give all COED professors, instructors and staff members accolades for setting student educational standards high and preparing them for their teaching journey.

"Dr. Monica Dillihunt, Dr. Hamsa Mahafza, Dr. Wolfram Verlaan, and Dr. Derrick Smith were all inspiring. My Kinesiology professors, Dr. Paul Whitehead, David Kyle, Liz Redding and certification officer, Chantaye Robinson-Jones, were great, too. From the very start it was evident that they all cared about the COED developing good teachers, but they also were very intentional about showing they cared about us. That’s something every student wants and needs from a teacher, no matter how old we are," said Elder.

Both graduates say it is difficult to find words to explain how honored they are to receive the UAH Dodd-Elder Physical Education Major of the Year Award.

"Caroline and I both work very hard at what we do, no matter what it is. Getting publicly recognized for our efforts meant so much. And to have Dr. Elliot present the award made it even more special," said Elder.

Just as before their UAH journey started, Dodd and Elder will embark on different paths after graduation.

Dodd, who did most of her student teaching at Mount Carmel Elementary and Huntsville High is completing an internship, and planning a wedding for July.

She will pursue a master’s degree at UAH in Differentiated Instruction with a concentration in Autism Spectrum Disorders. "My aunt has intellectual exceptionality and I have always had a heart for individuals who have special needs. On top of teaching and being a graduate student, I will play an additional year of lacrosse for the Chargers. Most people think I’m crazy, but I just love a challenge," said Dodd.

Elder has been student teaching all spring at Rainbow Elementary and Monrovia Middle schools.

"The hardest and most taxing project I completed was edTPA (method and practice of teaching test). It’s a new program that the state of Alabama requires education students to complete, and pass in order to receive their teaching certificate. I am in the process of applying for jobs and interviewing. I am open to go wherever. I am so excited for the journey that is to come. I have waited for what seems like forever for this time and now it’s finally here. I can’t wait!"

***EDITOR’S NOTE: Dodd and Elder both passed the edTPA test. According to Dr. Beth Nason Quick, Dean, UAH College of Education, edTPA is a performance-based, subject-specific assessment with planning, instruction, and assessment tasks, along with videotape segments of classroom teaching used by educator preparation programs nationwide. The state of Alabama now requires education students to complete and pass the assessment for initial teacher licensure.

Robert M. Lightfoot Jr., NASA Acting Administrator, will deliver the UAH spring commencement address on Sunday, May 6. The ceremony begins promptly at 2 p.m., and will be in the Von Braun Center (VBC) Propst Arena in downtown Huntsville.  The arena will open at 12:30 p.m. for early seating. All patrons entering the VBC during an event are subject to screening. For more information about prohibited items, please visit: vonbrauncenter.com/event-security-safety.