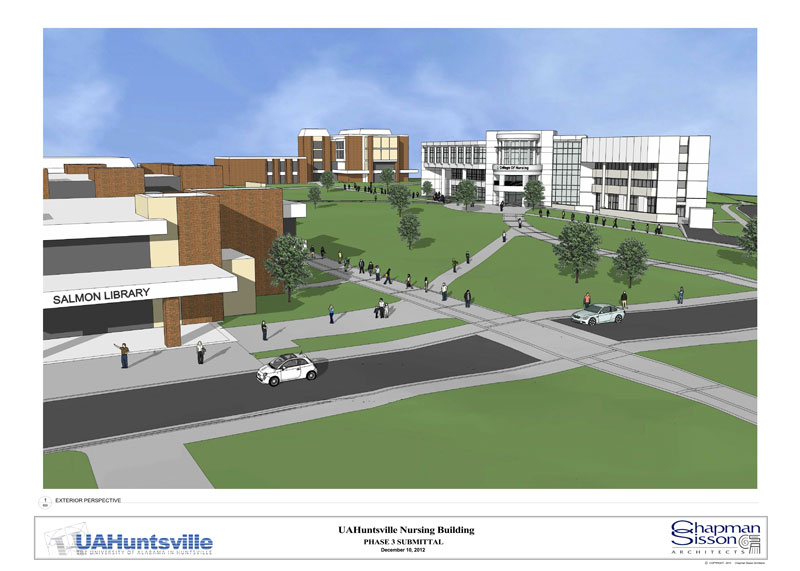 HUNTSVILLE, Ala. (Jan. 22, 2014) - When the Nursing Building was first erected on the campus of The University of Alabama in Huntsville (UAH) in 1976, it was a state-of-the-art edifice with a contemporary look and enviable banks of floor to ceiling windows.

And some four decades later, its distinctive exterior still holds up. But its interior, says Dr. C. Fay Raines, Dean of the College of Nursing, falls further behind in meeting the needs of the university's nursing faculty and students with every passing year.

"Enrollment was expected to be 250 students when the building was constructed," says Dr. Raines. "And now we're up 1,079! So we're out of space at this point."

As for the space they do have, she continues, it is woefully outdated. "When they moved in nearly 40 years ago, wiring for computers wasn't an issue," she says. "Updated classrooms? A lab with simulation models for clinical experience? Those weren't even in the picture!"

Now, however, they're de rigueur. Not to mention the modifications legally mandated under the Americans with Disabilities Act of 1990, adds Dr. Raines. "That's one of the major problems of the current building."

A few years ago, the issue reached a tipping point. "We had to start turning away qualified students," says Dr. Raines, "and a major part of the reason why was the lack of instructional space."

So the administration took a hard look at the College's needs, factoring in both student demand and the rapidly growing demand for healthcare nationwide. Ultimately, they decided on a carefully planned growth trajectory that would increase the enrollment goal to 1307 by the fall of 2019.

In conjunction with that, a plan was put in place to not only renovate the existing Nursing Building but also to enlarge it. "It's being done in two phases," says Dr. Raines. "The construction of the addition is anticipated to be completed in June of 2014, and the renovation of the existing building will be completed 6 to 8 months after that."

The expansion will provide additional classrooms, student gathering spaces, faculty offices, and a 250-seat auditorium. It will also house the College of Nursing's Learning Resource Center, known as Charger Hospital, which is currently located in Wilson Hall. 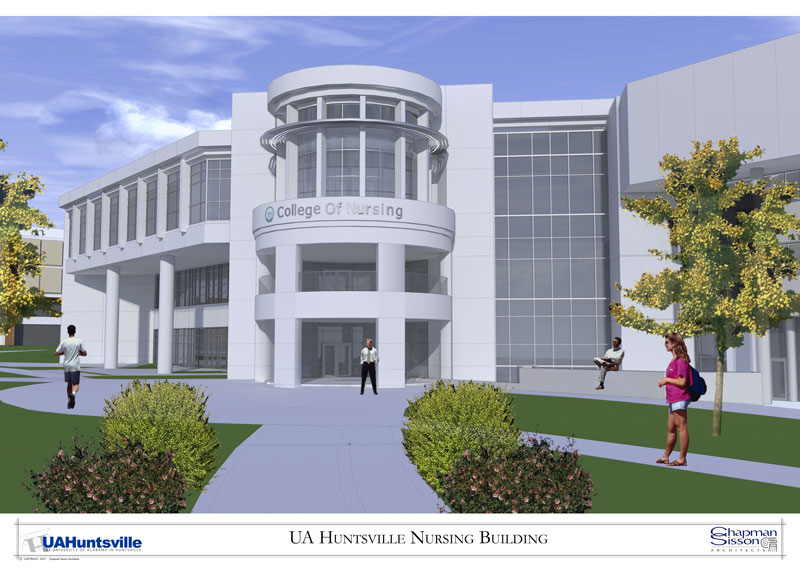 The renovation, meanwhile, will ensure ADA compliance of the building, create several new seminar rooms and faculty offices, update the building's mechanical system, and allow for the reconfiguration of the fourth floor into offices and meeting space.

It will also create a more visible, welcoming main entrance. "One of the problems with the existing building is that it's an odd shape," says Dr. Raines. "The main entrance is on one side, but the parking lot is at the back. But now the entrance will be clearly marked and will open onto the greenway."

That's all part of the master plan, says Michael S. Finnegan, UAH's Associate Vice President of Facilities and Operations. "The overall design of the proposed building was based on complementing the original design of the Nursing Building and reinforcing the greenway."

And as for how the $17,000,000 project will be funded? Finnegan says the money will come from a variety of sources, including revenue bonds, designated state appropriations, and gifts - which is fitting given that the students who use the building will ultimately end up giving back to the very people who funded it.

"About 85% of our graduates remain in the north Alabama area, so they're a huge portion of our healthcare workforce," says Dr. Raines. "That makes this a good investment for the community and the state."