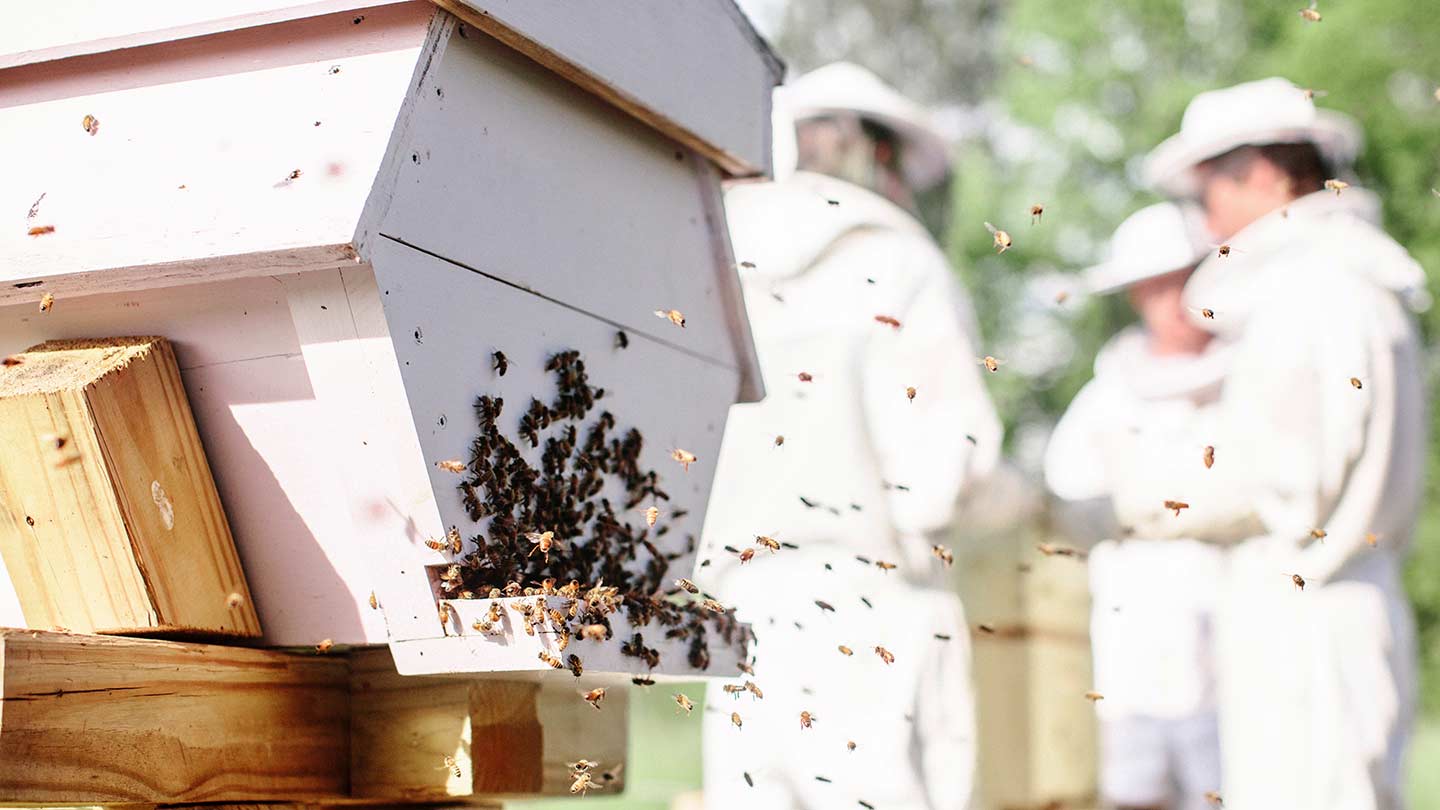 The UAH Beekeeping Club’s current hives are abuzz at their new locations.

This summer is a time of renewal and perseverance for the Beekeeping Club at The University of Alabama in Huntsville (UAH).

“These hives were doing great for nearly the whole summer, but near the end, they started experiencing problems,” says Kunisch, the club’s president, a rising senior from Loveland, Colo. “It was extremely disheartening and vexing. We learned a very hard lesson that every beekeeper will learn in time: you will lose hives no matter what. Sometimes you'll lose just one or two, sometimes you'll lose most, and sometimes, if your luck is really bad, you'll lose all of them.”

But adversity is an excellent teacher and experience is a good guide, so fortified with new knowledge, the beekeepers are forging ahead with two new hives for the 2018 season.

“We’ve stayed positive and made sure that we've recorded all of the lessons we learned in our first year.”

The club’s colony death problems have not been caused by the usual suspects: varroa mites, Colony Collapse Disorder or pesticide impacts.

“Rather, we've lost one hive from a lost queen, two hives from fire ants, one hive where the bees and queen simply left and one hive from high fluctuation of early spring temperatures,” Kunisch says. “Probably the biggest lesson that we've learned in our first year is that beekeeping is a surprisingly non-scientific activity. Issues faced by beekeepers are very location-specific.”

The accumulation of location-specific knowledge means there’s a lot of learning by experience and from mistakes, plus a certain degree of accepting that bad things can happen even if there are no mistakes, he says.

“For example, at our location, we've had huge problems from fire ants, which I had never even considered because none of my research ever mentioned fire ants as a potential threat,” Kunisch says. “Lots of sources cited varroa mites as a huge threat, but we've had no issues with varroa mites.”

The club’s strongest hive survived the entire winter, but then suffered some frustratingly bad luck. At the end of winter, the temperature fluctuated so much that the bees believed spring had come. When the temperatures dropped again, the bees had lost all of their stored warmth from the winter and froze to death.

“Each loss was devastating to the club, and this last one was the worst by far,” Kunisch says. “It was such a strong hive and it was so close to making it through to the spring, and it didn't make it due entirely to bad luck.”

Currently, the club is maintaining two hives near the Community Garden.

“Now, we've taken every precaution we can against pests, the beekeepers of the club are now much more experienced and comfortable with bee hives and we've lowered the frequency of inspections to try and bother the bees less,” Kunisch says. “Currently, our two hives are doing fantastically. They've already built more comb at this point in the summer than they built all of last summer.”

Club members come from a wide spectrum of backgrounds and just about every major, he says.

“It's hard to pin down the number of members, but I'd say that there about 15 students who consistently participate in club meetings and activities.”

“We allow anybody who so desires to come and observe our hive inspections, and we've held multiple outreach programs teaching about beekeeping and pollinators,” Kunisch says.

The Beekeeping Club is advised by Taylor Myers, UAH sustainability coordinator, and works closely with the Office of Sustainability and the Department of Biological Sciences. It has also partnered in numerous events with the Green Club and the Community Garden.

Founded to educate about beekeeping and the role of pollinators, the club raises funds by running a plant and honey sale in cooperation with the Community Garden and by selling T-shirts designed by club members. Last year’s steep learning curve meant only one hive could be harvested for honey, but that harvest turned out well.

“That was a great harvest,” Kunisch says. “We were able to get so much more honey than we expected, and it sold out incredibly fast.”