A bright future for one of UAH’s oldest buildings 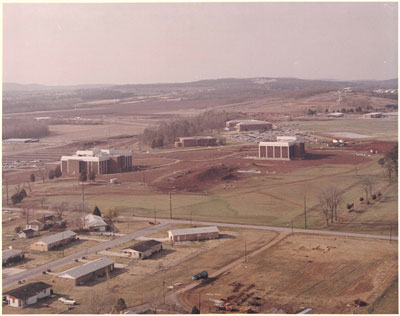 HUNTSVILLE, Ala. (August 1, 2013) - It's universally accepted that Wernher Von Braun's vision and influence were integral to the founding of The University of Alabama in Huntsville (UAH). But what is less well known is that Dr. Von Braun didn't just want the university to be a bastion of research and engineering. He also wanted it to be a center of cultural enrichment, where students could engage in both science and the arts.

"Education," he said in a 1961 speech, "must prevent people from becoming robots, and young people must acquire the moral and spiritual values adequate to decide wisely the uses which should be made of new knowledge with their minds not fashioned to function as computers, but with heart and soul."

It would be nearly ten more years, however, before the first edifice dedicated to the liberal arts - the UAH Humanities Building - was erected on campus. In 1969, local architecture firm Jones, Crow, Mann, and Associated drew up plans for the structure, and in 1971, construction was completed.

Yet from the beginning, the building was plagued by setbacks. "The original architect's building plan of a six-story 'A' side and two-story 'B' side came in at 66% over the estimates, so cuts had to be made," says Professor Emeritus Dr. Royce Boyer, who created the university's Department of Music in 1966. "Two floors were eliminated from the 'A' side to reduce costs and the music 'B' side lost almost all special sound separation and acoustical treatments."

Moreover, he continues, "construction changed to concrete blocks, and hardware and other aspects were cheapened in quality." The building's nearly 3,000-square-foot recital hall was also practically unusable.

"Humidity was a terrible problem in the early days," says Dr. Boyer. "It was so clammy we couldn't use the hall in the summers. Our first Steinway was returned to the factory due to our negligent humidity control in the recital hall."

Another aspect left wanting was the lighting. "I've told many friends that it would have been very effective for an Episcopal choral evensong service!" he says. "The recital hall had only the lights you see now mounted up in the ceiling. Four of the ranks were adjusted to focus toward the stage with spot bulbs instead, the rest floods."

And perhaps worst of all, the roof leaked. "They finally had to remove the 'light' concrete under the tar/gravel surface of the roof and start over. There still may be a drip stain to the right of the conductor on the recital hall stage floor where buckets were sometimes placed during rehearsals and performances," he says.

Education must prevent people from becoming robots, and young people must acquire the moral and spiritual values adequate to decide wisely the uses which should be made of new knowledge with their minds not fashioned to function as computers, but with heart and soul.

In fact, so important did the recital hall become to the community at large that in 1987 then-President John C. Wright submitted a proposal to rename the Humanities Building after one of the university's most distinguished faculty. The resolution, which passed without contest, reads:

But while the Board may have wholeheartedly approved of the motion, as a 1988 article by Peter Coburn in The Huntsville Times attests, Dr. Roberts herself was less than enthused. After all, she had made her feelings on the building known to the president as early as the 1970s.

"She told John Wright, when the architects unveiled their rendering for the Humanities Building, it was to be a grand structure. Six floors, braced by columns of glass which would illuminate the building in daylight," said the article. "But when bids were opened - the lowest was $800,000 over budget - the university ordered the building's scale cut.

"Two floors were sliced from its six. Its glass columns were peeled away, to be replaced with concrete. Its spacious stairwells were squeezed to fire-escape-like spires. Its recital hall was cut in half. In the last 20 years, it hasn't gotten any prettier. And certainly no more conducive to learning. That's what concerned Frances Roberts. And that's what she told John Wright."

Nevertheless, Dr. Roberts accepted the honor, and on May 14, 1988, a formal dedication ceremony was held. Attending the event were some of Huntsville's most accomplished dignitaries, among them Dr. Roy Meek, UAH's Dean of Liberal Arts; Mrs. Martha Simms, member of the UAH Foundation; Dr. John White, Chairman of the UAH History Department; Lynwood Smith, Circuit Court Judge; and Joe Davis, Mayor of Huntsville.

In his dedication ceremony speech, Wright not only praised Roberts' contributions but also alluded to the important place the building had come to occupy with the community.

"President [Benjamin] Graves was the first President of UAH. The building that we are dedicating today was constructed and the foundation for a University of diversity and academic excellence was developed during his tenure in office," said Wright. "This is the first building on campus to be named in honor of a member of our faculty and it is being dedicated to one of the founding faculty members of the University. 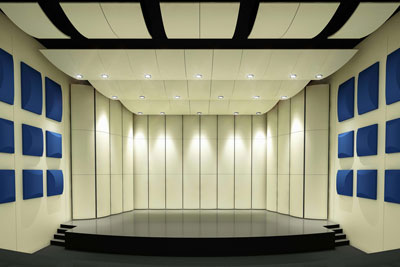 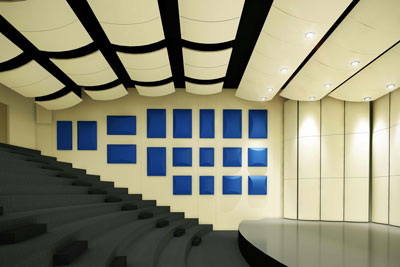 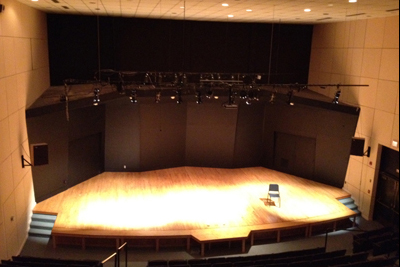 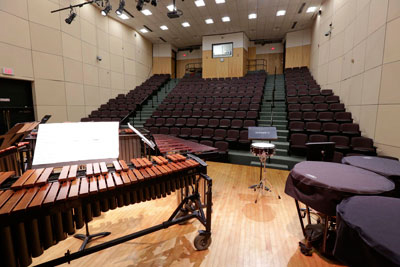 "In an important sense, it recognizes the contributions of all of those early members of the faculty who dared to dream that a University dedicated to academic excellence could be created in Huntsville, Alabama, and who had the fortitude to make it so. This ceremony also celebrates the centrality and permanence of the Liberal Arts in the university community."

Since the dedication, Roberts Recital Hall has undergone several small renovations. In the 1990s, a humidity- and temperature-controlled storage corner for the Steinway was added. And in 2008, the stage was expanded and seating was reduced to 222 from the original 235 to make the environment more spacious.

"Over the years nickel and dime lighting improvements have also been made," says Dr. Boyer. "And following the move of the Art & Art History Department to Wilson Hall and the Music Department expanding its spaces in the old art studios, we now have permanent choral and instrumental rehearsal rooms, and more teaching studios for the part-time faculty."

But, Dr. Boyer continues, "the recital hall remains antiquated in its appearance, lighting, and especially, its acoustics. This situation and quality storage needed to environmentally protect our concerts pianos were the criticisms issued by the National Association of Schools of Music accreditation team on their ten-year visit last spring."

A major overhaul, in other words, was overdue. And not just overdue, but long overdue, says Dr. David Ragsdale, Chair of the Department of Music.

"Roberts Recital Hall has hosted some of the world's most famous musicians and has served honorably as a dynamic gateway between the university and the greater Huntsville community," he says. "But nearly five decades and thousands of students later, our venerable performance hall is in much need of acoustic and aesthetic modernization."

That's why Dr. Ragsdale, with the assistance of Dr. Boyer, is spearheading an effort to completely overhaul the hall and install a state-of-the-art acoustic treatment. The hope? "To transform Roberts Recital Hall into the premiere music performance and recording venue in the region," he says.

To that end, Dr. Ragsdale enlisted a panel of acoustic specialists in 2011 to perform an exhaustive acoustic calibration of the interior space. They, in turn, recommended a battery of acoustic and aesthetic upgrades to every hard surface, including the following:

The panel also advised making technology upgrades in sound and light with the installation of professional stage lighting and professional sound design, recording, and post-production equipment.

A second, later phase will then address the aesthetic renovations of the lobby and backstage/greenroom space, capping off the venue's transformation into a state-of-the-art concert hall.

"This renovation, with its vast improvements to sound, lighting, and overall aesthetics, will finally bring Roberts Recital Hall into the modern era," says Dr. Ragsdale. "And perhaps even more so than it has been in the past, the hall will be a central gathering place for the performing arts on campus and in the community."

As with any project of this scope, however, funding is a major concern. Current estimates suggest the renovation will cost close to $300,000. But bids cannot be accepted nor a contractor secured until at least half of that amount has been raised.

Fortunately it's a dilemma that may be resolved sooner rather than later thanks to the recent launch of a mini-campaign to raise funds. Brenda Walker, UAH's Assistant Vice President for Development, says the drive will offer both large and small sponsorship opportunities to prospective donors.

"As part of this campaign, we are also inviting our friends and supporters to 'Take a Seat'," says Walker. "Donors who contribute $1000 or more will be able to select a seat in the renovated hall bearing an engraved metal plate with the name of their choice."

And given that Roberts Recital Hall has already long nurtured the culture of music here in Huntsville, she continues, "it's an investment that is sure to benefit countless student recitalists, professional performers and attentive listeners at hundreds of performances each year for many years to come."

Which speaks directly to Dr. Von Braun's entreaty for a university that would allow students to engage their brains, their hearts, and their souls. "For close to fifty years, Roberts Recital Hall has brought both heart and soul to the university," says Dr. Boyer. "This renovation ensures it will continue to do so for at least fifty more."