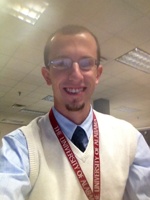 Our current Honors student in the spotlight is Justin Sulfridge.  Justin is one of 22 seniors graduating from the Honors Program this academic year.

Where did you attend high school and what activities were you involved in?

What's your class/major here at UAHuntsville and what are your future career goals?

I’m a senior majoring in Mechanical and Aerospace engineering.  After graduation, I hope to seek employment with the Boeing Company’s Huntsville Design Center. I am currently working on their Product Definition Team, which is an effort of Boeing and UAHuntsville Students to complete the 767-2C Tanker program.

What do you ultimately see yourself doing career-wise?

I hope to receive my Masters in Aerospace Systems and a PhD. in Engineering Management. With those degrees, I would like to work in the Missile Defense industry as a Project Manager.

What Honors courses are you taking or have taken recently?

I’m currently working on my Honors Thesis on the “Development of Mass Allocations from Previously Flown Spacecraft Data.”  I’ve also recently worked on two Honor’s Contracts. In Elements of Spacecraft Design (MAE 468), I worked on determining the feasibility of using a cryogenic propulsionsystem to Saturn's Moon Enceladus. In Rocket Propulsion (MAE 440),  I learned how to design and build a water rocket.

What else are you involved in at UAH?