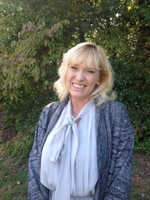 Our current student spotlight is Deanna Nicholas from Gurley, AL.  Deanna is currently a junior majoring in Psychology with a double minor in Women’s Studies and Communications.

After graduation, Deanna plans to pursue a master’s degree in psychology.  She plans on opening a new kind of rehabilitation facility for abused women. Her goal is to help the community by targeting individual women who have major traumas to overcome, giving them a plan of attack, guidance, resources and support, thus mending broken families and stopping the generational cycle of domestic violence and abuse. She hopes to do this in memory of her daughter, Heather, who was murdered in 2004 in a domestic violence incident. She was only 18 years old. The Honors Program has been a fantastic experience for her, and has opened doors to a deeper intellectual understanding that is going to serve her well when she opens the North Alabama Women's Community Equity Project.

At UAH, Deanna is also involved with the Non-Traditional Women’s Student Network (soon to be UAH MARES) as a mentor for non-traditional women students on the UAH campus. This program gives women a place to go to make friends, get advice and support in navigating college when  they may feel like they don't belong because of age, time away from school or having a family to care for.

Deanna has been a volunteer with Crisis Services of North Alabama since January, and have just begun her internship there working with victims of domestic violence. Her internship involves working in Domestic Violence Court Advocacy,   observing abuse order hearings and  taking part in domestic violence support groups. Deanna is also a graduate of CSNA's crisis intervention training course and a volunteer on HELPline, a 24 hour suicide and crisis intervention line.