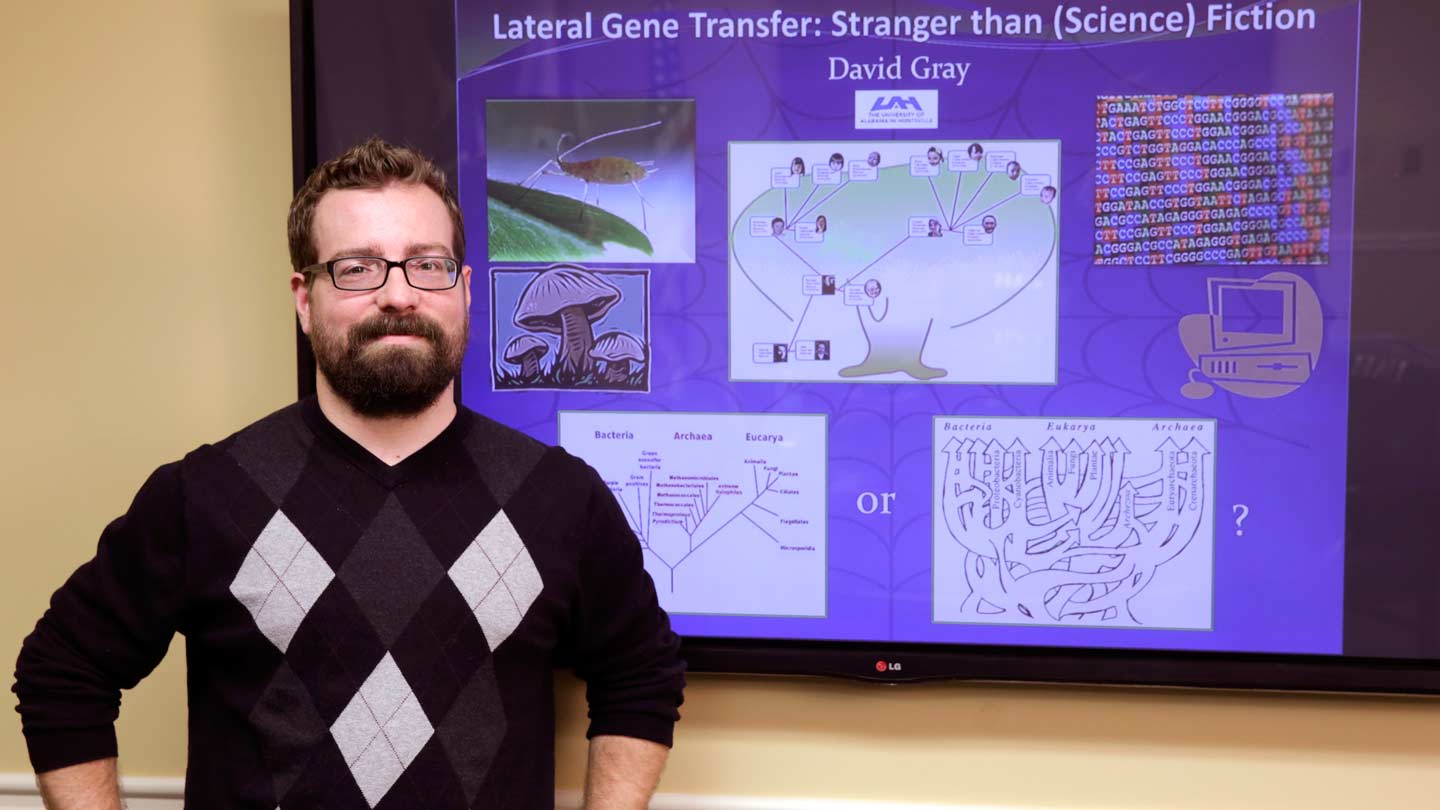 Trying to explain a complex scientific concept like lateral gene transfer in three minutes so that the average person can actually understand it is a task most of us wouldn't even consider undertaking. But not only did David Gray rise to that challenge, he blew it away – twice.

A graduate student at The University of Alabama in Huntsville (UAH), Gray took the top spot in last November's Three Minute Thesis and Dissertation (3MT) competition here at UAH before going on to win the grand prize at last month's regional 3MT competition in San Antonio, TX.

How did he do it? Well, first he got a little help from a well-known superhero.

"I watched videos of past winners and I noticed that almost everyone had come up with an analogy to explain their research," says the biochemistry major. "So I decided to use Spider-Man as my analogy, because Spider-Man gets his powers in a way that seems a lot like lateral gene transfer."

As Gray explains, lateral gene transfer is the "movement of genes between organisms that aren't necessarily related to each other." Those familiar with superhero mythology will of course recall that Spider-Man, then just the lowly Peter Parker, gained his powers after being bitten by a radioactive spider.

With his analogy in place, Gray then turned to UAH Communication Arts professor Kristin Scroggin for some presentation pointers. "I knew I was weak in those areas but I didn't know how totally weak I was!" he says. "So she helped me work on how I use body language and movement and facial expressions to improve my presentation."

That included engaging the audience by smiling and making eye contact, appearing confident, and incorporating movement. "David was a quick learner and receptive to every bit of feedback I offered him," says Scroggin. "I knew he had what it took to win."

Gray, however, wasn't as certain. "I was so used to standing there that when she said, 'Ok, at this point, walk to the other side of the stage,' my mind went completely blank!" he says. So he decided to bring in two ringers to act as his trial audience – his parents.

"My parents are science-literate, so if I explain something to them and they don't understand, then I know it's too much," he says. "And that's important because the people who provide grant funding and the taxpayers who fund those grants should be able to understand what we're doing."

Ready or not, the November competition arrived and it was Gray's chance to present. "The way it's structured, there are no props, no costumes, no rhyming, no singing – it's just one slide with no animation," he says. "It's just you and your slide for three minutes."

But his hard work paid off. While the competition was "really close," says Gray, he came in first in his division. "I got a $300 cash prize and all-expenses-paid trip to the regional competition in San Antonio," he says. At which point, it was time to get back to practicing.

"Up to the night before my presentation in San Antonio, I was juggling things around and trying to get it just right," he says. Once there, he made it through several preliminary rounds before ending up in the finals against what looked to Gray like an unbeatable foe.

"The other guy's presentation was on using computer-imaging software to detect the relative quantities of pollutant exhausted from a concrete factory," he says. "I hadn't seen his presentation yet, and I thought he had a really strong presentation style – his tone of voice and body language were really good."

Still, he says, it was anyone's game. "These things are so hard to judge and they told us the difference in scores was usually a point or two, so it's hard to say who would win." And in the end, he prevailed. "When they announced the other guy was second, I knew I'd won!"

As the regional victor, Gray received a $1,000 cash prize. But he says he took home something even more valuable from the experience: an understanding of how important it is not just to grasp complex concepts, but to also be able to share them with others.

"Graduate students spend all of their time presenting to experts in their field, and it's really difficult to turn that around and present to anyone who wants to follow what they're doing," he says. "So I think everybody in graduate school ought to do a competition like this."

And maybe by doing so, says Gray, they can help make science more accessible to those who are put off by its perceived complexity or more popular among those WHO already have a burgeoning interest. After all, he points out, "show me a kid who doesn't want to catch bugs or love dinosaurs."

Or, for that matter, Spider-Man!

In this video, Gray recreates his Three Minute Thesis presentation.