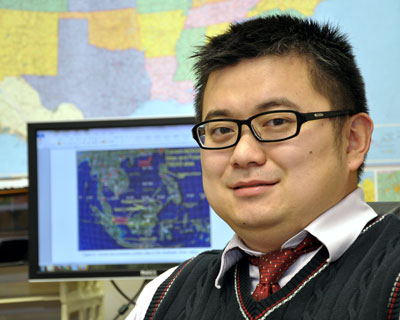 HUNTSVILLE, Ala. (June 4, 2013) - Nan Feng, an atmospheric science graduate student at The University of Alabama in Huntsville (UAH), has won a prestigious NASA Earth science fellowship for the 2013-14 academic year.

One of 56 fellows chosen from 330 applicants, Feng is the only student in Alabama to win a NASA Earth science fellowship this year. The one-year, $30,000 fellowship can be extended for two additional years. Feng is the eighth UAH atmospheric science graduate student to win a NASA fellowship.

A native of Wuhan in central China, Feng found UAH for his doctoral studies after doing a literatures survey for terms related to his research interests: "atmospheric aerosols" and "satellite remote sensing." His search found Dr. Sundar Christopher, chair of UAH's Atmospheric Science Department and the author of more than 100 research publications relating to using satellite sensors to study aerosols - small particles floating in the atmosphere.

"Feng is an exceptional student who is working hard to tackle some of the difficult scientific problems related to aerosol particles," said Dr. Christopher. "He came to UAH because he was impressed by the number of peer-reviewed papers that graduate students publish with their advisors. I am confident that Feng will make significant scientific contributions in the years to come."

Feng's graduate research uses satellite sensors and a numerical model to study how land use changes and biomass burning aerosols might be changing weather and climate in southeast Asia, an area reaching from Indochina in the north to Indonesia, the Philippines and Malaysia in the south.

"That area has the third most land cover change in the world during the last several decades," Feng said. "They are cutting down peat swamp forests for both logging and farming, and when they clear those forests they burn it off down to the roots, which releases a large amount of smoke."

Wet tropical forests release water into the atmosphere and prevent heat build up, while cleared areas are both drier and hotter. Aerosols such as smoke and dust released by the burning and the land use change can have an impact on the climate for thousands of miles downwind of the places where the land is cleared.