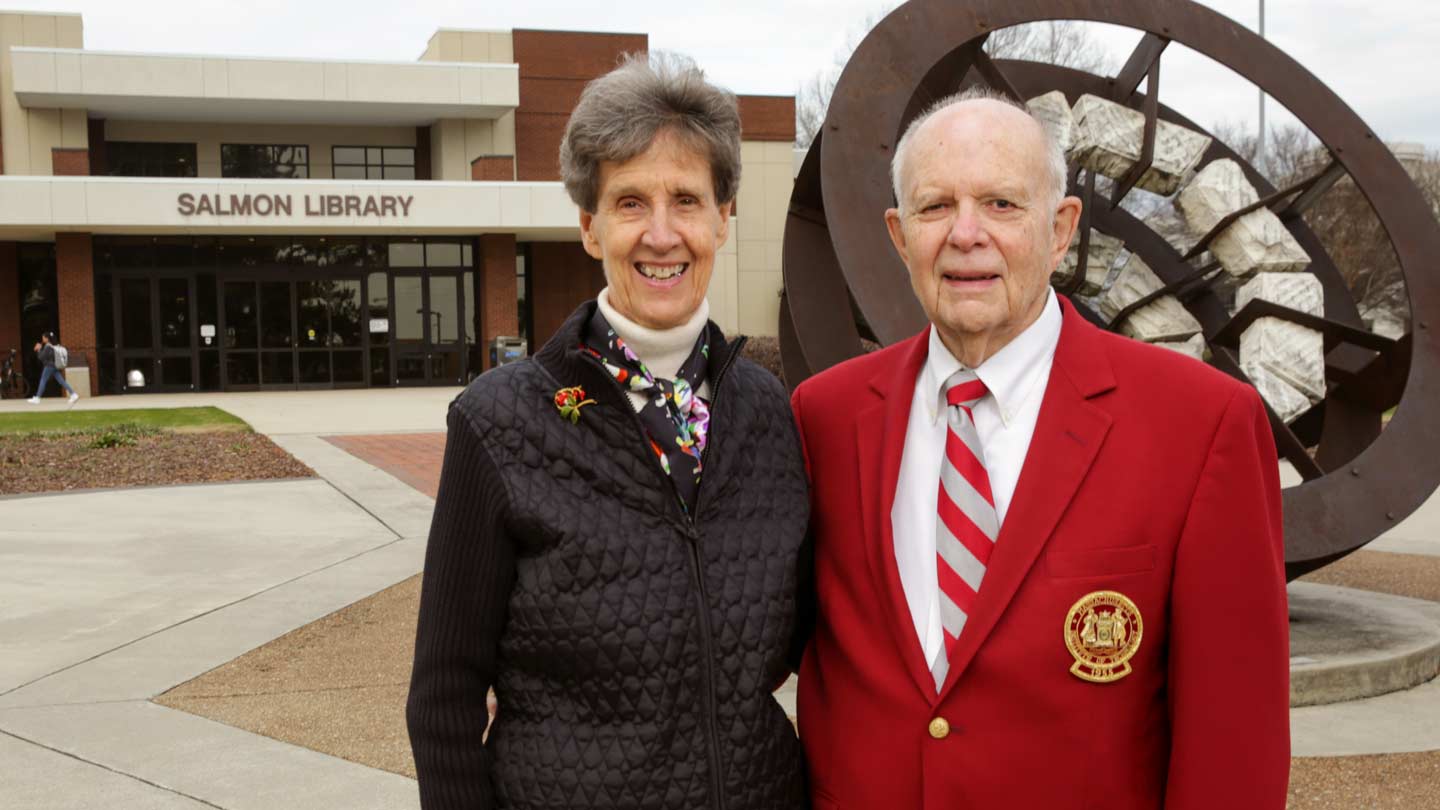 Christel and George McCanless believe in the benefits of education. Over the years several dozen students at The University of Alabama in Huntsville have received a boost for a brighter future thanks to the scholarships established by the couple. The scholarships honor the donors’ late parents, and most of the UAH students were able to renew their scholarships for all four years of their educational pursuits.

UAH has a special place in Christel’s heart because she was hired in 1963 as the first full-time library director when the Huntsville campus was an extension center of the main campus of the University of Alabama in Tuscaloosa. Morton Hall, the only building on the Huntsville campus, housed the library along with classrooms, faculty offices, the bookstore and the administrative offices. During her five-year tenure the library grew to three locations on the campus, the book collection was manually changed to the Library of Congress cataloguing system, and $250,000 book budget one year was a very special bonus to improve a fledging library.

The couple first met in a library. "I picked her up in the Technical Library at Redstone Arsenal," George recalls with a laugh. "She was employed as a summer student. I was a young engineer with a head full of hair. She thought I was rich because I had my own car." Christel jokes that they still "shush" each other a lot, but in their 56 years of wedded bliss they have enjoyed a life of education and adventure. They are determined to share with others and give them the chance to do the same.

George grew up in east Tennessee, 20 miles from the Great Smoky Mountains, graduated from the McCallie School in Chattanooga (TN), and the Massachusetts Institute of Technology near Boston (MA). After a two-year stint as a US Army private at Redstone Arsenal, he stayed in Huntsville where his mechanical engineering degree from MIT led him to a career on the Arsenal. He retired from NASA.

Christel is the daughter of Emmy and Hermann Ludewig. Her father was the deputy head of the fuselage group responsible for much of the German V-2 rocket fuselage design as a part of the Wernher von Braun team. She was born in Peenemünde, Germany, by the Baltic Sea where the rocket development center was located.

After World War II, the family survived by living on a small orchard in Communist East Germany in Trebbin, a town forty miles south of Berlin. Christel at age 13 was completing her 8th grade education, when the government in 1953 decreed she would no longer go to school, but would become a roofer instead. This coincided with her father’s job offer in Russia (complete with a military escort). The family fled on short notice and came to America where Christel’s father rejoined the von Braun rocket team.

Their trip to Huntsville included 12 days at sea on an Army troop transport ship, General Alexander A.M. Patch, followed by two days and nights on a train from New York City to Huntsville. She remembers the family arriving in Huntsville in the middle of the night with nothing but the clothes they were wearing. When they arrived at the old Huntsville train depot at 2 a.m., she recalls her mother commenting on the street lights and how this must be a nice place to have lights on at night. Back in Trebbin, they only had electricity one hour in the morning and one hour at night.

Christel and her family only knew German, so she had to repeat the 8th grade and went to summer school as she made the transition to American life. After finishing Huntsville High School in three years she headed to college, now the University of Montevallo. With a B.A. in English, she enrolled at the University of North Carolina, Chapel Hill (NC), where she earned a M.S. in Library Science.

George and Christel’s respective careers are history now since they are both retired. But that does not mean their adventures are over. George says, "Our parents had done so much for us, and when they were gone, we wanted to pass on their goodness and do something to honor them."

The UAH scholarships established by the couple include:

Sarah Hardcastle McCanless Scholarship, in honor of George’s mother, awarded to a full-time undergraduate student based on contributions to the school and community.

Emmy and Hermann Ludewig Scholarship, in honor of Christel’s parents, awarded to a full-time undergraduate student based on contributions to the school and community.

Christel Ludewig McCanless Scholarship, awarded to an undergraduate student with preference for a student who completed a two-year degree program at Gadsden State Community College.

They are also funding two scholarships at the McCallie School in Chattanooga (TN).

Not only have George and Christel honored important people in their lives, they say they thoroughly enjoy the relationships they have developed with UAH students. They regularly attend donor events to meet the scholarship recipients.

"We recently met one student … who was most appreciative and told us she could not have gotten through college without the scholarship," George says. "So, we certainly got a good return on our money." The donors could not be happier about their decisions to create the scholarships. "The fun part is meeting the students and learning where they came from, what they are majoring in and what their dreams are," Christel says. "And then once a year, they are required to write us a letter about their accomplishments. We love getting them."

The students’ appreciation and connection usually does not end with an annual letter as they complete their studies. Christel says we get letters, cards, and invitations to recital performances and weddings — even after the students have graduated. Christel and George McCanless greatly enjoy giving to the students. "It is nice to be a small part of their lives," Christel adds. "It has been fun … and sure beats becoming a roofer after the 8th grade."