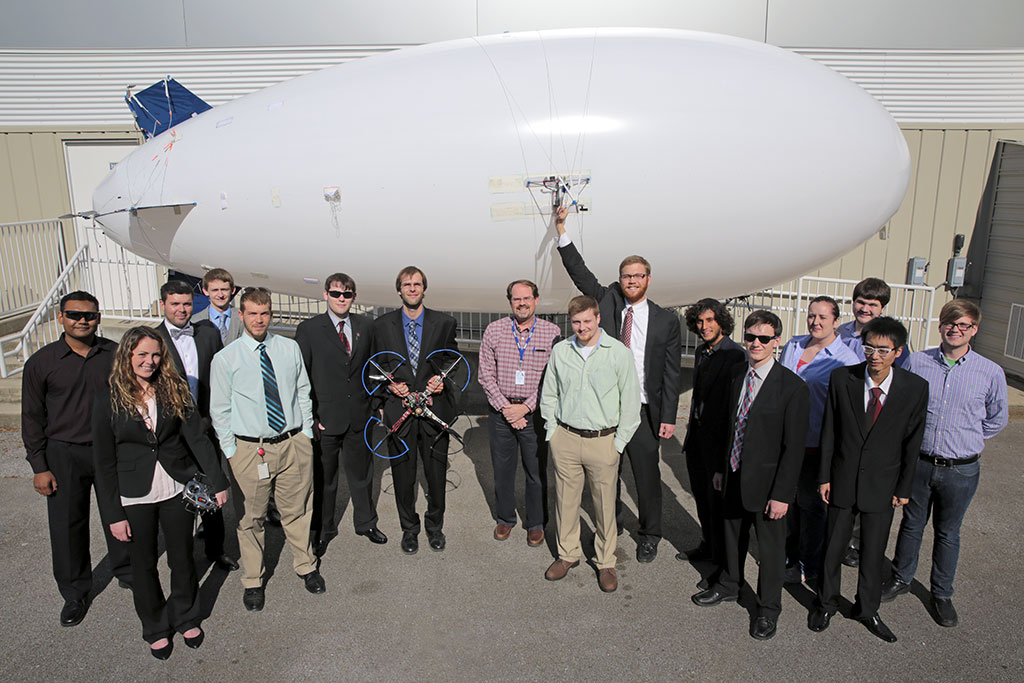 HUNTSVILLE, Ala. (May 5, 2014) – Take two University of Alabama in Huntsville (UAH) professors with cross-discipline interests, add a group of enthusiastic senior aircraft design students, mix well and let them get cooking.

The result is a blimp-like airship that's the mother ship for a smaller quad-rotor unmanned aerial vehicle (UAV), and it may be the wildest thing to ever have been performance tested inside Huntsville's Von Braun Center.

The helium-filled airship has a remote-controlled capture and release docking mechanism that also charges the UAV from batteries aboard. The project recently won second place at the 65th American Institute of Aeronautics and Astronautics (AIAA) Region II Student Team Design Competition in Memphis, Tenn.

Because the airship provides long-distance flight to position the UAV for shorter and closer scanning flights, it provides the best of both worlds for Dr. Rob Griffin, assistant professor of atmospheric science, who wants to use it to do aerial agriculture mapping. When Dr. Griffin and Dr. D. Brian Landrum, associate professor of mechanical and aerospace engineering, discussed the idea, Dr. Landrum found a potential project for his MAE494 aircraft design class that would involve more than just his student engineers.

"I was aware of the work by Dr. Griffin and the Earth System Science Center (ESSC)," Dr. Landrum says. "We realized there was a need for long-endurance, but also agile, aerial platforms for agricultural applications. When I proposed the idea of an airship with a smaller UAV that could be deployed, re-docked and recharged, the senior design students immediately picked it for their project."

"The idea of using a platform like this for precision agriculture was primarily Dr. Landrum's and he deserves all the credit for leading such a great team," says Dr. Griffin. "The concept potentially has a great deal of utility, as acquiring timely and thematically appropriate high-resolution imagery for precision agriculture becomes increasingly important in the U.S., and specifically for our region.

"From the atmospheric science and Earth science perspective, the concept ties into a lot of cutting edge work on evaluating and modeling crop stress and soil moisture availability in the Southeast that's currently being done at UAH by Dr. Dick McNider and Dr. John Mecikalski, both of whom are in atmospheric science, and Dr. Jim Cruise of the ESSC," says Dr. Griffin.

The airship could also prove useful for forest fire detection, because "what better platform for that than to cruise above it at a high altitude and yet be able to take a closer look at certain areas when that is needed?" says senior mechanical and aerospace engineering student Stewart King, the team lead. Other uses include search and rescue missions or defense applications, King said.

Designed, engineered and hand-fabricated by the students utilizing UAH's Engineering Design and Prototyping Facility (EDPF), one of the largest student-centered facilities of its type in the country, the mother ship has a 20-foot-long by 6-foot-wide helium-filled polyurethane envelope that was donated by Southern Balloon Works. An active weight distribution system keeps the craft level, and it is directed using a rudder and lightweight fins.

The remote control software was written by students from CPE495, a senior-level computer engineering design class under the direction of Dr. Earl Wells, professor of electrical and computer engineering. "These students really came through in helping realize the communications, data transmission and command and control subsystems," says Dr. Landrum.

A 750 kilovolt slow-turning motor on the airship drives a 10-inch propeller for forward motion. The airship is equipped with an NTSC camera for docking imagery. The UAV, supplied by UAH's Systems Management and Production Center (SMAP), carries a Go-Pro camera payload. Both feed live video to ground monitors.

Special guards were engineered and fabricated to protect the UAV's four rotors from damaging the airship or being damaged by impacts. The UAV was tested for flight performance on the grounds of Westminster Academy.

"Definitely the biggest engineering challenge was the interfacing of the airship and the rotorcraft," says senior John Alcorn, chief engineer. To accomplish that, two moveable plastic flaps in the apex of a docking cone on the airship accept a rod that extends upward from the UAV. Finding a lightweight ball to top the rod and fit into the docking mechanism proved challenging, until the students hit on a solution.

"We were on the sports aisle of the store looking for something that would work, and someone saw a Foosball and said, 'That's it! That will work!' says Alcorn. "And it's really perfect for it, too. Just the right size and very lightweight."

Inside the Von Braun Center for final testing, the craft surpassed its flight criteria. The airship flew by remote control while maintaining proper attitude, and released the UAV as planned. The UAV flew independently by remote control for over 11 minutes, exceeding its five-minute requirement, then successfully docked.

As part of the class, students managed the project budget, assigned each part in the build a unique part number and drew a set of detailed plans. The students' final presentation was May 1, and Dr. Griffin was on hand.

"I was impressed and thought the presentation was incredibly professional. What a great bunch of young students!" says Dr. Griffin. "Overall, I think Dr. Landrum's students did a fantastic job, and I think the project illustrates the potential for multi-disciplinary research-driven education at UAH."

"The quality of my senior design students the last two years has been exceptional," says Dr. Landrum. "These are not only very academically gifted students, but they also have an amazing work ethic. The student team leaders led by example to produce close-knit, effective teams to accomplish projects that would challenge engineers with many more years of experience."

"From a human relations standpoint, what has really been great about this team is that we all have families, we all have jobs and we all have heavy class loads, and it is amazing how the members of this team came together and we all worked so well together," says Alcorn. "And we didn't have to pull any all-nighters!"

The finished airship has future prospects, since Dr. Landrum has been talking with Norven Goddard, a SMAP principle research scientist, and it sounds like they're cooking up a few new ideas.

"I would like to continue to enhance the airship/quad-copter system capabilities, including autonomous docking," Dr. Landrum says. "I have had preliminary discussions with Norven about future applications in precision agriculture, public safety and weather monitoring."