HUNTSVILLE, Ala. (June 18, 2013) - OK, you shoot a mock satellite up on a rocket, keep in touch with it as it takes telemetry information and then track it as it comes down. Easy, right? Well, it's not nearly as easy as it sounds, and it takes two semesters to design it and get it ready.

Two CanSat Competition teams of engineering students from Space Hardware Club at The University of Alabama in Huntsville (UAH) have returned from the arid lands of Texas, where they competed in UAH's fifth appearance at the annual CanSat competitions. Team Demolisher, led by Mason Manning, placed seventh overall, and Ironhide, led by Trey McFerrin, placed 21st at the June 8-9 rumble.

"The idea is to engineer a small mock satellite, then put it up on a rocket, and then collect and store telemetry data and use radio communications to track it," said McFerrin.

Once they reached the Cross Plains, Texas, proving grounds, the teams made final touches to the hardware. Up until the rockets launched, the devices were beset by software challenges and a balky spring-loaded drag device. One CanSat did not deploy fully, speeding its descent back to Earth, Manning said. Both teams were able to launch, operate and recover the satellites.

CanSat is an annual student design-build-launch competition open to teams from universities and colleges worldwide that is organized by the American Astronautical Society (AAS) and American Institute of Aeronautics and Astronautics (AIAA). The idea is to give students the experience of being involved with the end-to-end life cycle of a complex engineering project, from conceptual design through integration and test, actual operation of the system and a post-mission summary and debriefing.

Under competition rules, the UAH team designed and built a space-type system in accordance with an approved competition guide. That process took two semesters. In the fall, the UAH teams did design and concept work, followed by building and testing in the spring. "That's the real nuts and bolts work of getting it together and working right," said McFerrin. The rockets used were provided by the competition - but that didn't stop the UAH teams from building their own rocket mockup and testing its limits.

The UAH teams were advised by Dr. Francis Wessling, a professor of mechanical engineering. Some of the expenses of UAH's CanSat development, lodging and travel were defrayed by the Alabama Space Grant Consortium.

Competing teams undergo a series of design reviews. The "Preliminary Design Review" is conducted to review the concept followed by a "Critical Design Review" of the flight design itself. A "Post Flight Review" is conducted on the day after flight. "Teams are scored on these reviews and on the performance of their satellite," Manning said, with 50 percent of the score on the design reviews and 50 percent on the performance of the satellite. The Texas launch was June 8 and the post-flight review was June 9.

Photos and project information are available at space.uah.edu. 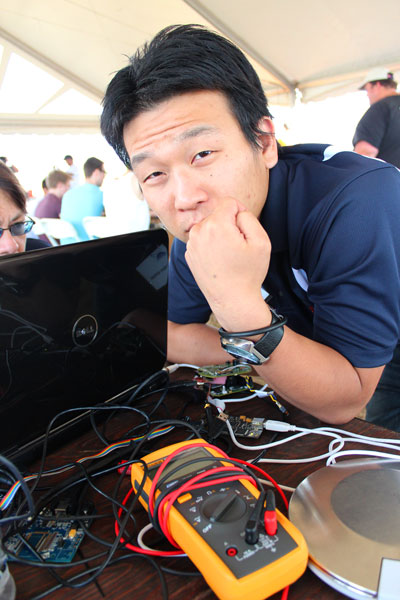 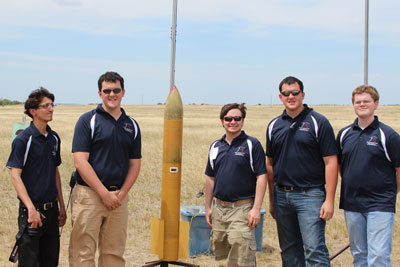 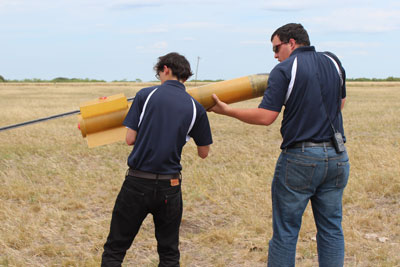 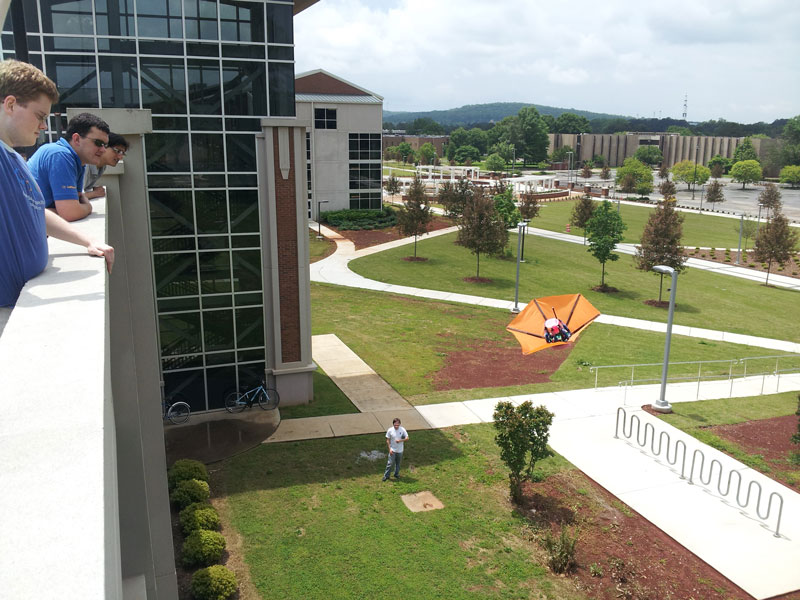 From left, Mason Manning, Eric Becnel, Ali Butt and Matt Rodencal (on the grass) performing drop tests from the UAH parking garage prior to competition.