Distinguished Seminar - Role of Turbulence in the Atmospheric Processing of Clouds

Role of Turbulence in the Atmospheric Processing of Clouds 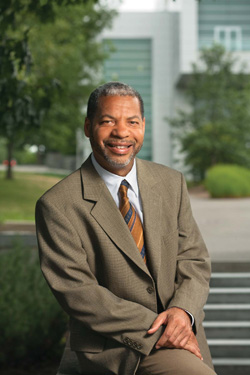 ABSTRACT: in a particular size range, a uniform distribution of particles or droplets in turbulent air will spontaneously cluster. The clustering is caused by the inertial mismatch between the heavy particles and the lighter surrounding fluid; vortices in the flow "centrifuge" the particles into the interstitial straining regions. The resulting non-uniform particle concentration field enhances the rate of coalescence. This may explain the rapid development of cumulus clouds under conditions that are not well described by current meteorological models. In this talk, I will review our attempts to quantify inertial clustering in our direct numerical simulations, as well as discuss recent measurements made in the laboratory and in the atmosphere by my collaborators.

Lance R. Collins is the Joseph Silbert Dean of Engineering at Cornell University. Prior to that he served as the S. C. Thomas Sze Director of the Sibley School of Mechanical & Aerospace Engineering from 2005-2010, and he was Director of Graduate Studies for Aerospace Engineering 2003-2005. He joined Cornell in 2002, after serving for 11 years as Assistant Professor, Associate Professor and Professor of Chemical Engineering at the Pennsylvania State University. In 2011, Dean Collins was part of the Cornell leadership team that successfully bid to partner with New York City to build a new campus on Roosevelt Island focused on innovation and commercialization in the tech sector. He continues to work with other campus leaders to bring this exciting new campus to fruition. Professor Collins' research combines simulation and theory to investigate a broad range of turbulent flow processes, including the motion of aerosol particles in turbulence (with applications to cloud processes and global climate modeling), mixing and chemical reactions in turbulent flames, turbulent breakup of drops and drag reduction due to polymer additives. In 1997 he received the Best Paper Award from the American Institute of Chemical Engineers, and in 2007 he was elected a fellow of the American Physical Society. He is past chair of the US National Committee on Theoretical & Applied Mechanics and serves on the Division on Engineering and Physical Sciences, both committees operating under auspices of the United States National Academies.