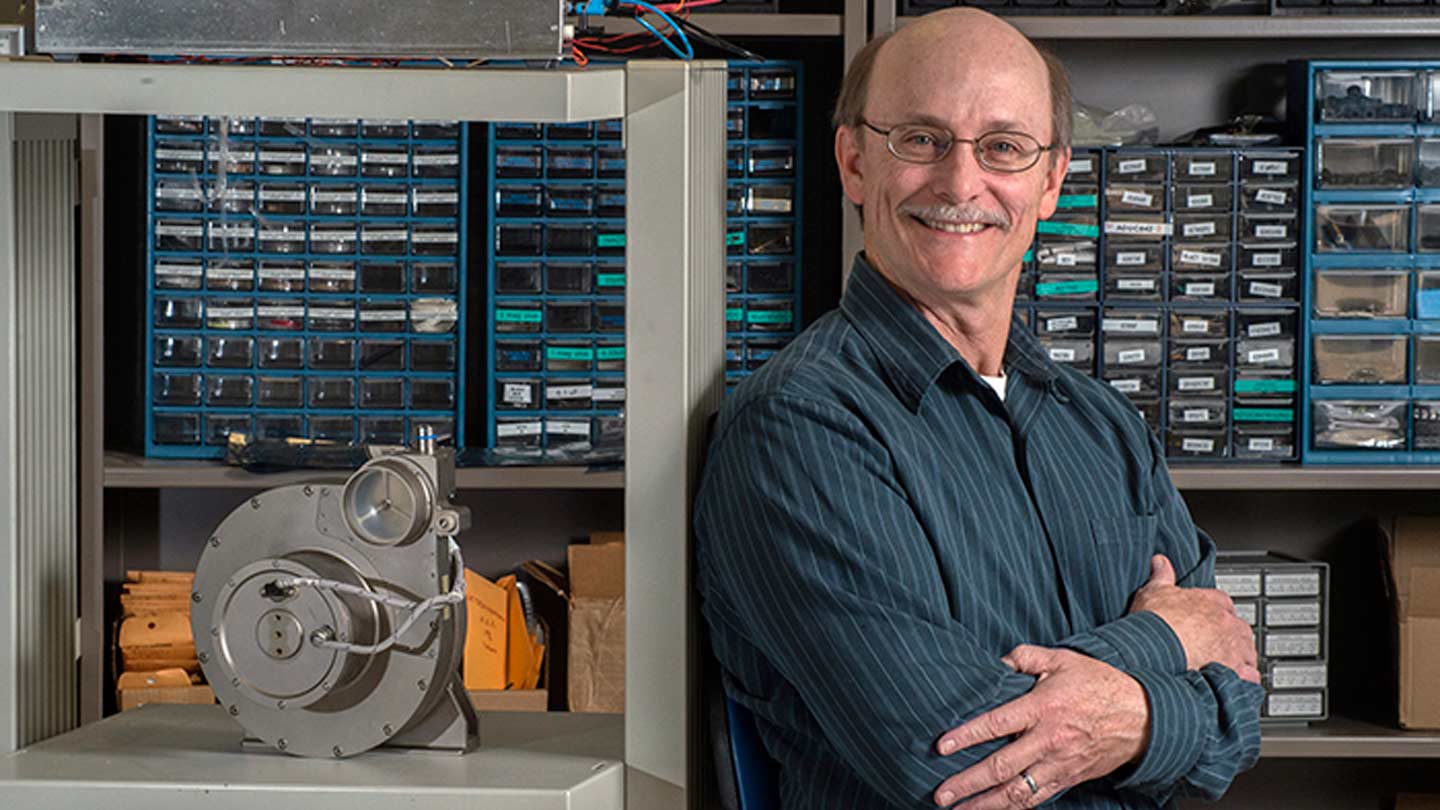 Howard worked as a civil servant for NASA at Marshall Space Flight Center (MSFC) for 34 years until his retirement in 2014. He currently holds a contractor position with Jacobs Engineering Group, Inc. as an Engineering Specialist II.

“Electronics and mathematics had always interested me, so it seemed like a pretty good fit,” Howard says. “After graduating from UAH, I started working for NASA, and I have worked for them ever since, either as a civil servant or a contractor.”

Howard’s inventions range from instrument and motor controls and signal conditioning electronics, to projects that have provided numerous benefits to critical NASA missions, such as electromechanical actuators for thrust vector control for the International Space Station (ISS).

“I have been fortunate through the years to support a number of flight hardware programs that I was able to see through the inception, design, manufacturing, testing and flight support,” Howard says. “Several of these designs were part of the Environmental Control and Life Support System (ECLSS) for the International Space Station.”

The inventor’s ingenuity has supported everything from microgravity experiments and Differential Ion Flux Probes, to the Fast Affordable Science and Technology Satellite, and his projects have garnered nearly 20 patents. With a track record for this kind of innovation and success, you might wonder if he ever pauses to reflect on his achievements?

“Not really,” Howard says. “They were more of a result or byproduct of the good fortune I had in having a lot of hands-on hardware design projects that were of short enough duration in time that I could see them from inception all the way to flight. The patents were just a byproduct of the work.”

The inventor found his true niche to be in supporting a special type of “cradle to grave” project that enabled his talents to thrive: “Being able to work on relatively small programs that enabled me to see the inception, design, build, testing and flight support of many projects through the years,” Howard notes.

Always one to focus on the task at hand, he ultimately came to realize that a number of these advances in technology were worthy of official registration.

“About 10 years into my career I saw that some of the things we were working on were probably patentable, so I begin to submit them as New Technology through the Technology Transfer Office and the Patent office,” he says. “Prior to that I had not really thought of myself as an inventor, and I still do not really consider myself an inventor, as much as a designer where innovation has been byproduct of the design work.”

Howard found the patent process reaped benefits, even when a design was not eventually patented.

“At MSFC the process was to submit a written description of the technology to the Technology Transfer Group and to the Legal Office,” he explains. “I found this to be a great way to document the design, even if it turned out to not be patentable. From there, the legal office made a decision on whether to pursue a patent or not. We would work with the patent attorney to write and defend the technology.”

Howard points out that patience is required to make it to the finish line with new technology. “The process often took at least a couple of years,” he says.

With his election to the IHOF, Howard joins an exclusive “club” that boasts a number of legendary aerospace figures as members, among them Dr. Wernher Von Braun. How does it feel to be in such select company?

“I haven’t really thought much about it,” he says. “Wernher Von Braun and others like him were true pioneers and innovators in the U.S. space program. On the other hand, I am a design engineer that was fortunate enough to receive some patents as a byproduct of the work I was given the opportunity to do.”

The inventor recognizes certain people who were much closer at hand that have inspired him along the way.

“Probably the mentor that encouraged me and mentored me the most to be an inventor was Frank J. Nola,” he says. “He mentored me in design and technology during the first 15 years of my career. Dean Alhorn and Dennis Smith were peers and co-inventors that worked with me for many years and were influential in my career.”

It was Nola who helped Howard pursue projects that involved Control Engineering in particular. “When I begin my career, I worked with [Nola] on several projects that dealt with motor controls. This really interested me, how you could design electronics to make motors perform in various ways, such as saving power, turning mechanisms at one revolution per day, controlling engines on the Space Shuttle, etc.”

Howard is currently investigating the development of things like signal conditioning and control electronics for projects such as Four Bed CO2 Scrubber technology, as well as a Purge Pump Separator Assembly, both for use on the ISS.

Asked if there is any invention, patent or idea that he is especially pleased to have created, the inventor gives an answer characteristic of the modesty and drive of a man more interested in continually looking to the future and a new crop of “brain children.”

“I thought there were a few a little more innovative than others, but none that really stands out to me.”