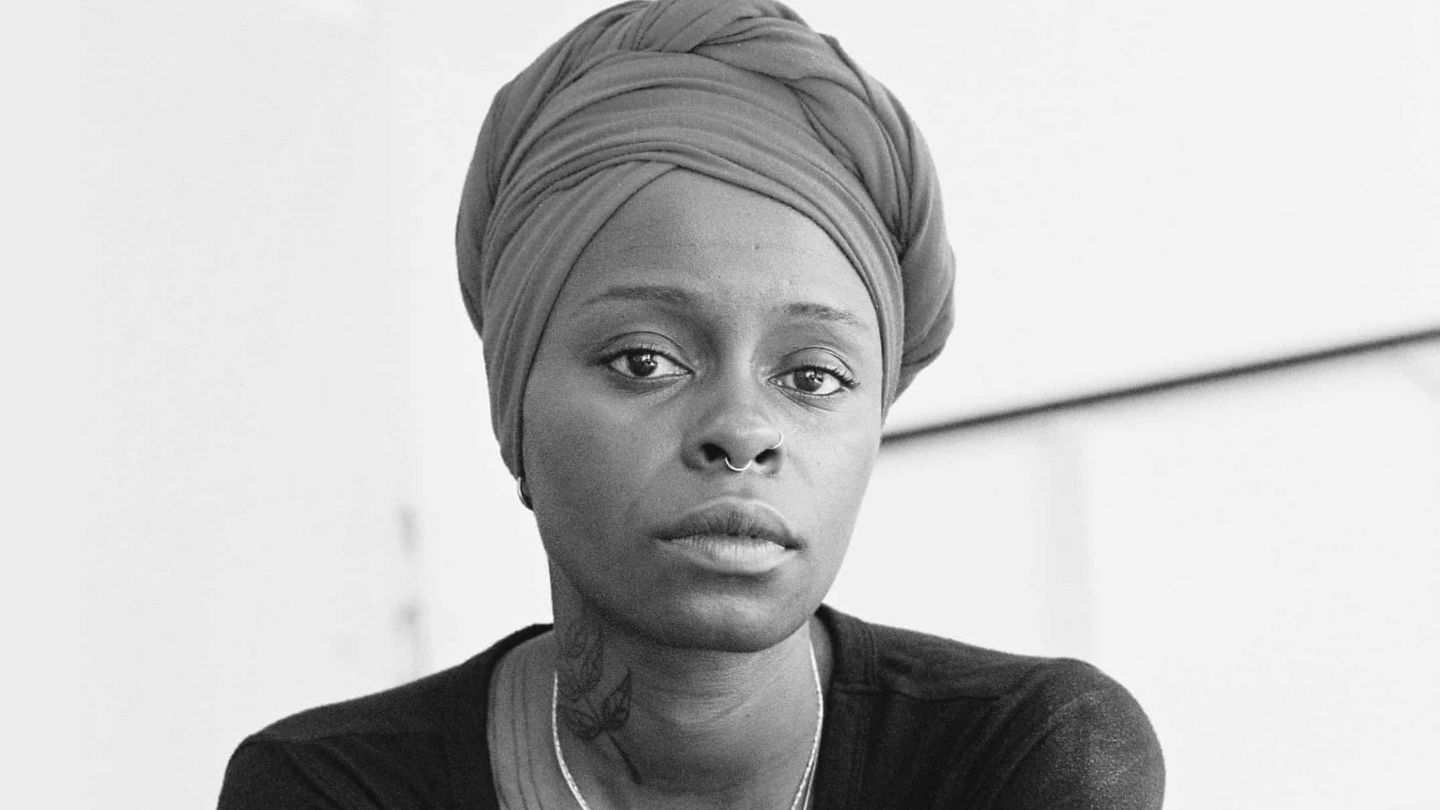 UAH Alumna Toyin Ojih Odutola: "I need to create something in order to understand it."

Born in Ife, Nigeria, Ojih Odutola earned her BA in Studio Art and Communications from UAH in 2008 and later added an MFA from California College of the Arts in San Francisco. She lives and works in New York where she creates multimedia drawings on various surfaces to explore formulaic representations and how such images can be unreliable, systemic and socially coded.

This past August, Ojih Odutola journeyed to England to exhibit her works in London at the Barbican Centre in an installation called 'A Countervailing Theory,' her first-ever UK commission. This exhibition presents an epic cycle that explores an imagined ancient myth. Executed in pastel, charcoal and chalk, the installation features a series of 40 drawings, each acting as an individual episode within an overarching narrative set within a surreal landscape inspired by the rock formations of Plateau State in central Nigeria. The narrative depicts the tale of a fictional prehistoric civilization dominated by female rulers and served by male laborers to investigate the power dynamics at play within such a community.

Ojih Odutola, who moved to Alabama with her family when she was nine, feels that attending a university known primarily for science and engineering helped define her space and independence as an artist.

"Within the dichotomy of the sciences, and the arts specifically, there are parallels of thinking," she explains. "The scientific process affords options in thought-experimentation and application helpful with the problem-solving involved in art-making. Surrounded by that methodology aided me immensely as I continued onto my post-graduate studies. You hear of doctors or astronauts adopting artistic processes in order to access new ways of approaching projects and conundrums. Mine is the inverse of that. I'm incredibly fortunate to have had such an education as an undergraduate."

Recognized both nationally and internationally early on for her unique perspective on portraits using ink pens, the artist has a long-held sense of the importance of the tools she uses for her projects.

"Much of the creative decisions made early in my career were predicated on my access to certain tools and materials — due to financial restraints or lack of knowledge," she says. "These seemingly incidental choices have come to define how I create: starting from restriction brings out interesting questions and results. From there, you travel to fascinating places and it helps one focus. I've been lucky the drawing materials I utilize — such as pen ink, graphite, charcoal, pastel and colored pencil — are rather versatile to a variety of marks and the vagaries of surface. And so, this 'restrictive' catalyst leads me to an abundance of expressions. I'm not discounting how working from a boundless choice of mixed media doesn't have similar effects — there are plenty of ways to create whatever's best for your process."

Ojih Odutola sees herself as an artist "who imagines things that don't exist in the world and figures out how to translate them. In the studio, I'm dealing with a variety of concepts and themes, which can get overwhelming and require a great deal of research," she says. "Conversely, there's something in the 'working through in order to understand' aspect of the process which is akin to how Joan Didion describes her approach to writing. I find this connection in my work: I need to create something in order to understand it, and oftentimes that has taken the form of a story. The materials and surface grounds I chose to explore this story have to be tight and ironed out early to best tackle these images and the overall visual language of the work."

How those images come to being appears to recall vestiges of the young art student navigating a STEM environment, how the problem-solving of art tends to become an act of translation. In fact, Ojih Odutola describing the notion of observing the potentiality of a work and translating it into 'existence' feels akin to fields like quantum theory.

"I was thinking of [American literary translator] Gregory Rabassa's statement on how 'every act of communication is an act of translation,' as it applies here," she says. "I would like to expand on that idea: I imagine what's missing in the world — this can take on many forms in many contexts — then try to convince myself and others that these things aren't missing at all. To tackle what you perceive is lacking you have to tackle your own proclivities and what you are not seeing in the world. There are layers to the blind spots and positions we find ourselves in, but our arrivals into these frameworks aren't accidental and they shift. I used to believe translation was the best way to explore this, especially when you create pictures dealing with the figurative and black subjectivity. However, I got trapped in a cycle. I was trying to be as direct as possible while leaving enough room for ambiguity for a viewer to partake in the image-making. What tends to happen is that directness gets subsumed into whatever 'existences' are visible to those who choose to see them.

"Potentiality is the strength of a work, but only when it's applied freely without the presumption of understanding," the artist notes. "I used to be afraid of it, yet obfuscation can be useful. Opacity becomes a narrative, no matter how complicated, and people will figure it out if they are engaged. You relinquish the insistence on believability to push past that. Believability is the first step, the next is having a stranger who sees the work read it as something that's always been there despite my distance from them and their experiences. You can get wild and go far with the imaginary. It's nothing new: why get caught up in trying to be original when originality is beholden to what you perceive is possible? It's a remix of things you have acquired and/or consumed as well as your openness to further possibility. Much emphasis is placed on artists translating the world we live into the visual form, to create a kind of mirror of the state of things, but that renders images to such a small scope where they lack agency. It ignores how art can alter states, not reflect them for relevancy. I want to create pictures that stretch the capacity of what our world can contain and demonstrate that through the creative choices I make."

In considering the possibilities of an ancient civilization in central Nigeria, an outside observer might wonder about the sources of her inspiration — does she look consciously for sources that enable her to envision the story that has the possibilities she wants to explore? Or does she come across something by chance that excites her as a starting point for doing so?

"It oscillates between both those impetuses," Ojih Odutola says. "That question came from listening to the BBC Radio 4 podcast called, 'A History of the World in 100 Objects.' It was created in partnership with the British Museum, an institution under contention and scrutiny from how objects in its collection came to be there. 'A Countervailing Theory' started from hearing their episode on the Ife Head, an artifact created in the town I was born. Listening to how this storied object had been reduced to colonialists' ignorance of an entire civilization was incensing.

"When I was invited to do the commission at the Barbican Centre's Curve gallery, I had to weigh this being my first exhibition in the UK with my own ideas about the stories we tell ourselves," she says. "I wanted to expand and complicate the imaginary dimensions of the Ife Head's story and the country that created it — not for the British, for myself. Once I began the drawings, I knew I needed to create a more demanding and complex world. This isn't to say the source material didn't have all of this already and more; the art I was creating only reified a fully enriched past. The research helps to acknowledge what has been agreed upon as fact, so when I create my own story, I'm collating and altering the sources to imagine what might have been beyond those facts."

This tendency to 'look beyond' recalls something Carl Jung once said: that he had no interest in writing an autobiography, because the only thing he did that was interesting was invisible, inside his head. In this context, one might ask, does Ojih Odutola focus more on stories 'out there' that she connects with, rather than creating art that emphasizes her personal story and identity?

"Identity is important, yet it can be distracting," she says. "I agree with Jung, though it's funny; his 'life story' is what's going on in his head. It's the irony of creating anything: no matter how far away it may be from you, it's always you, it's through you — not limited to your ideas, your experiences, your beliefs and your biases. What's in your head is a combination of concerns and how you seek to manifest it in the work is to arrive at meaning. Thus, what you choose to spend time on, what holds your attention and investment of efforts, is you. The images could look nothing like your reality, or they can; it doesn't matter. It's the way you see the world; your pictures are simply a filter predicated on context. And that's on everyone."