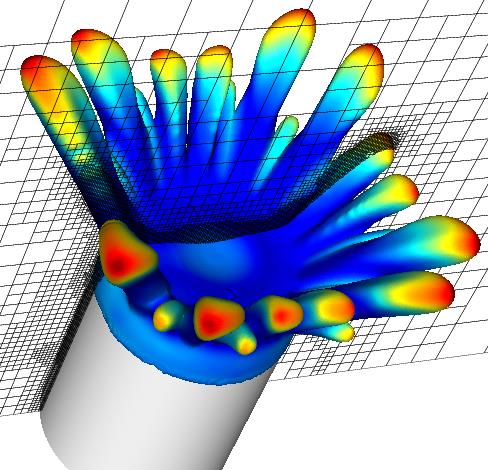 This image illustrates 3D simulations of a streamer development near a rod-shaped anode in corona discharge with Adaptive Cartesian Mesh.

A partially ionized plasma is a collection of charged (electrons and ions) and neutral particles (atoms, molecules, and photons) collectively interacting with electromagnetic fields. The goal of this thrust is to develop theoretical and computational models to describe particle transport in low-temperature plasma, coupling electron transport with electromagnetics, plasma chemistry, and plasma interactions with boundaries and interfaces. The research challenges are associated with identifying correct criteria for selecting appropriate models for electrons, ions, and neutral species, coupling kinetic and fluid solvers at interfaces, resolving multi-scale challenges, and developing computational tools for plasma engineering on modern computing systems. Particle transport can be described by either kinetic or hydrodynamic (fluid) models. Kinetic models are based on Boltzmann, Vlasov, and Fokker-Planck kinetic equations. Fluid models express conservation laws for density, mean velocity, and temperature of plasma species.

This thrust provides theoretical, computational, and experimental methodologies and techniques for studying fundamental properties of low-temperature plasma, its interactions with boundaries and interfaces, and practical applications in modern technologies. 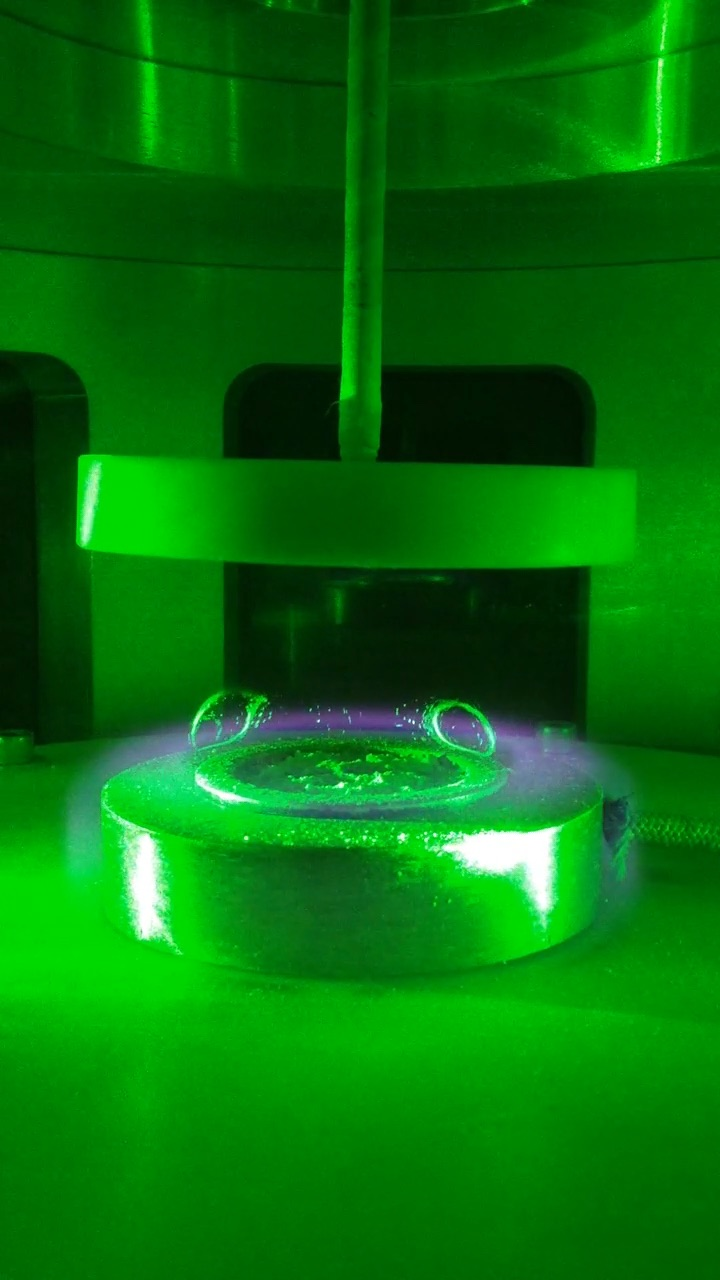 This image illustrates rings of charged dust particles in a plasma.

One of the unique properties of plasma is the ability of charged particles to self-assemble into ordered patterns.  These patterns are believed to arise from microscopic processes that occur due to the interactions of the charged particles in the plasma with electric and magnetic fields and mutual interactions among the particles themselves.  These microscopic processes then grow into the large-scale, self-organized patterns that are shown in these photographs.

In the CPU2AL projects, an important goal for our researchers is to understand how to control and manipulate these processes.  In some cases, for example, when plasmas are used for manufacturing, we want to avoid the formation of these ordered patterns because we want to have large, uniform, stable plasmas.  In other cases, such as studying how structures like Saturn’s rings are formed, we want to be able to form these self-assembled patterns in the laboratory.  We use both experimental and theoretical studies to understand pattern formation in plasmas. 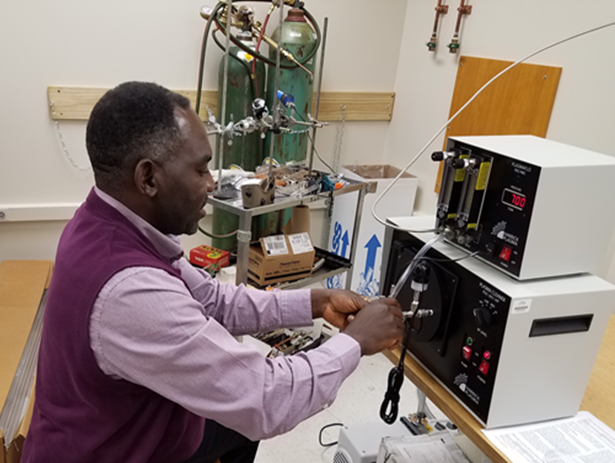 One research area is the synthesis and processing of novel superhard materials using a microwave plasma chemical vapor deposition technique. The focus is on first and second row elements (C, N, O, and B) that form dense covalent and ionic solids in three-dimensional network structures which are extremely hard and exhibit unique electronic and optical properties. Also, graphitic carbon is being harvested from renewable waste sources for incorporation into composites after plasma treatment. Various boron carbides, boron nitrides, and carbon-boron-nitrogen compounds are being synthesized that survive heat better than diamonds and also have a diamond-like hardness. The gas phase chemistry is studied by a variety of plasma spectroscopy techniques and is utilized for identifying critical growth species required for synthesis of novel superhard materials.

This research thrust also focuses on understanding the effects of low-temperature plasma on biomaterials, plants, seeds, and agricultural products and the fundamental processes responsible for their bioactivity. Plant seeds treated with plasma have been shown to produce increased crop yields and nutritional content. Low-temperature plasma offers potential for chemical-free means of disinfection of fresh agricultural produce including poultry meats and eggs. There is also significant research activity in low-temperature plasma treatment of biostable and biodegradable tissue engineered biomaterials. The plasma treatment of biomaterials is being investigated to promote adhesion/conjugation of biomolecules and proteins that accelerate the proliferation of cells onto them, and drug molecules for controlled release or cellular growth factors to promote biointegration.