Taelor Allen is a rising junior from Tuskegee University participating in the Alabama Research Experiences for Undergraduates (ALREU) summer internship under the guidance of Dr. Gabe Xu on a project designed to develop, test and characterize atmospheric pressure plasma (APP) sheet sources. The ALREU program, which lasts for 10 weeks, was open for applications from students attending HBCU institutions that are also apart of the nine universities comprising NSF EPSCoR’s CPU2AL team. As part of the application process, students were asked to rank potential projects to allow them to be placed in an internship most suited to their interests. Taelor was most interested in working on plasma research and she has been able to do that at the Plasma and Electrodynamics Research Lab (PERL) at UAH as well as with Dr. Armitra Jackson-Davis at the Food Microbiology lab at Alabama A&M University.

Taelor described plasma as the fourth state of matter that doesn’t get as much attention as the other states but occurs when electrons and ions are energized to a certain degree that turns them into plasma. Plasma is most commonly used for semiconductor processing but also has applications ranging from materials and agriculture to water treatment and more.  For Taelor, the most interesting aspect of the project is interacting directly with the plasma. She said that you “would think it would feel hot or something weird, but it feels like someone just breathing cold air on you.” The hands-on aspect of the research has proven to be informative and stimulating for her.

Each day, Taelor spends time at PERL at UAH or she goes to A&M to work with the students at the Food Microbiology lab where she participates in testing and streaking chicken samples for pathogens to see the effect of the plasma on pathogen growth. Her time working at UAH focused on a recently developed plasma sheet that has the potential for commercial applications. She works in the lab with graduate and undergraduate students who are assisting with this experimental research by studying and characterizing the plasma generated by the plasma sheet. According to Taelor, the experience has been collaborative between both A&M and UAH and has allowed her to meet and interact with individuals from both universities, providing her with opportunities to observe areas that she may be interested in studying during graduate school. “Taelor has been a great student to have this summer.” Dr. Xu says. “Her measurements of the plasma has provided us with new results and insights on plasma uniformity which will help us to further develop the plasma source and understand some of the biological effects of the plasma.” 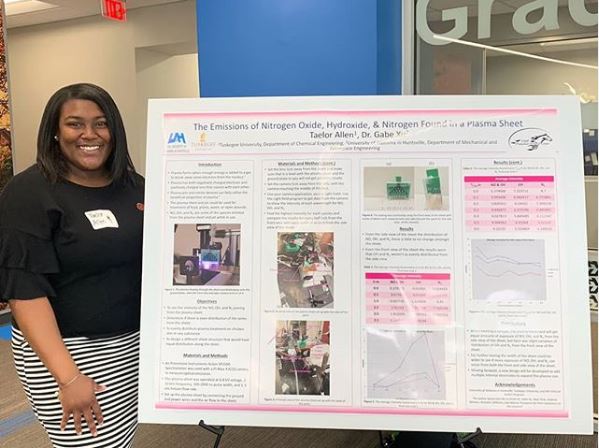 As part of receiving the summer internship, Taelor was allotted funds to attend a conference of her choosing to present the results of her research. She is currently in the process of writing the report to summarize her internship activities and the outcomes from it. She stated that writing the report and the presentation portion of the internship will help her with her preparation for graduate school in biomedical engineering or biochemistry. She hopes to present her research poster at Texas A&M in October of this year. The report is “a simpler version of a real lab report and explains what I did for the summer, what the outcomes of it were and how this internship will help me in my career,” says Taelor. Taelor expressed that the internship at UAH has been a good experience and has exposed her to a wide range of research activities and allowed her to form professional relationships with researchers and other students.