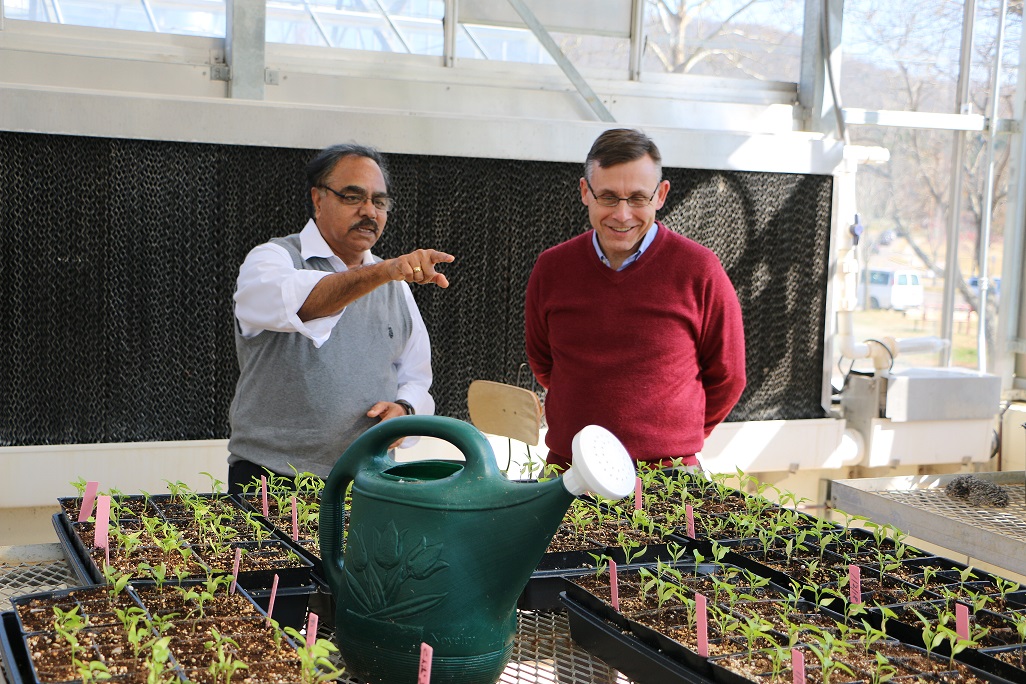 According to Dr. Rao Mentreddy, Professor of Crop Science (AAMU), most of the current research has been focused on seed germination and seedling growth, with the scientific literature containing information on the evaluation of LTP treatments on seeds of major crop commodities such as wheat, soybean, oilseed rape and rice, but not on common vegetable seeds or rhizomes.  Few studies have reported LTP effects on plant growth following a greater percentage of seed germination in grain crops.  And furthermore, there is little to no evidence of LTP effects on seed-borne pathogens.

Consequently, Dr. Mentreddy and his AAMU colleagues, Dr. Leopold Nyochembeng and Dr. Ernst Cebert, anticipate that their research on LTP will not only provide an understanding of mechanisms underlying the LTP effects on pathogens and plant growth but also strengthen this area of seed-borne pathogen management.

Most of their research to date has been conducted in collaboration with CPU2AL partner institution, UAB, specifically with cooperation and facilities provided by Dr. Yogesh Vohra and postdoctoral fellow, Dr. Paul Baker.

That research includes a recent study on the effects of low-temperature plasma on bell pepper seeds to disinfect and enhance seed germination.  Two separate experiments were conducted using the seeds of bell pepper to determine the optimal conditions for assessing LTP effects on seeds with or without seed-borne pathogen.

In response to the latter outcome, Dr. Mentreddy says they are still exploring protocols and fine-tuning specific parameters to determine the most effective procedures for LTP treatment to achieve desired effects on seed-borne pathogen, seed germination, and plant performance.  By

optimizing plasma source, power (voltage) settings, duration of LTP exposure to organisms and handling of specimens post LTP treatment in future experiments, they hope to see an increase in seed germination and plant resistance, improved plant performance with no deleterious effects, and suppression of plant pathogens in LTP treated seeds.

The team has since started another experiment, testing LTP effects on turmeric, which is currently trending as the number one herbal supplement in the United States.  Turmeric, primarily propagated by rhizomes (storage roots), suffers from a major limitation in the form of uniform sprouting.  This research, in collaboration with Dr. Gabe Xu and his postdoctoral fellow, Dr. Ryan Gott from the University of Alabama in Huntsville, will help in timely planting of uniform plants that could produce a better yield of crop.  And Dr. Mentreddy reports that they have already seen highly encouraging results and are planning more experiments to optimize experimental conditions.

The advantages of this research, both economically and environmentally should not be understated.  Seed-borne pathogens can pose serious threats to seedling establishment and plant growth. Currently, only a few options are available (e.g., hot water treatment) to achieve non-chemical sanitization of seeds to manage seed-borne and seed transmitted pathogens. Chemical methods, such as fungicides and antibiotics, used to control seed-borne pathogens are costly and hazardous to the environment. Furthermore, antibiotic resistance, as in the case of bacterial plant pathogens may also occur. The economic advantages of using LTP, on the other hand, include low cost, potential increase in yield, and environmental safety.

Dr. Cebert adds that the team is seeking the participation of industries from the agricultural sector, including poultry processors, seed companies, nurseries, and other food processors.  Interaction of leaders from the private sector with scientists who are actively engaged in applied research will allow a seamless transition from the laboratories to industries, ultimately benefiting consumers.