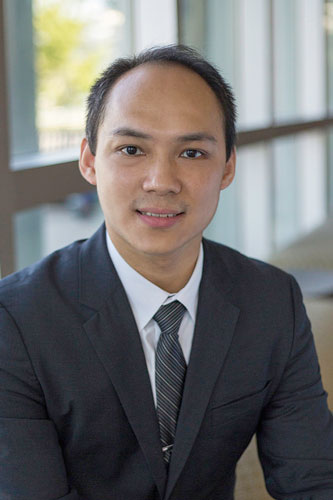 Dr. Cheng-Chien Chen is the first of the University of Alabama at    Birmingham’s (UAB) Physics Department hires associated with the NSF EPSCoR, Connecting the Plasma Universe to Plasma Technology in Alabama (CPU2AL) project. His expertise is in the computational modeling of superhard materials.

Dr. Chen was born and raised in Penghu (the Pescadores Islands), an archipelago of 64 islets in the Taiwan Strait. He was intrigued by physics at an early age thanks to his father, a high school physics teacher.  He expanded his interest at the National Tsing Hua University located in Hsinchu City by majoring in Physics and receiving his bachelor’s degree in 2004. While attending National Tsing Hua University, Dr. Chen was introduced to semiconductor technology innovation and materials science and found it so interesting that he decided to pursue a career in condensed matter physics. This interest took him to California where, in 2011, he graduated from Stanford University with a Ph.D. in Physics.  Cheng-Chien then became a postdoctoral scholar at SLAC National Accelerator Laboratory and later an Aneesur Rahman Postdoctoral Fellow at Argonne National Laboratory. Working in National Labs allowed him to collaborate closely with experimentalists and provided him access the nation’s state-of-the-art supercomputers.

With a faculty position at UAB, Dr. Chen and his group plan to perform advanced simulations to model superhard systems, with the goal of predicting their crystal structures and mechanical properties from first principles. In particular, Dr. Chen’s group will utilize crystal structure prediction (CSP) techniques including the evolutionary algorithm to study binary systems such as B-C and B-N compounds. Comprehensive calculations with different CSP methods and software using BC5 as an example will be performed to find the most suitable system for covalently-bonded materials. In addition, with the knowledge of atomic arrangements from CSP or experiments, Dr. Chen’s group will perform density functional theory calculations to model mechanical properties such as the Vickers hardness with semi-empirical models. Finally, in the later years of the CPU2AL project, Dr. Chen’s group will adopt data-driven approaches with machine learning techniques in an attempt to greatly reduce the timeline for materials discovery, especially for ternary or even quaternary superhard compounds of C-N-O-B elements. These newly predicted crystals and their mechanical properties may be synthesized and characterized directly at UAB or other partner institutions in the CPU2AL project. The proposed research thereby provides a unique collaborative opportunity across the AL campuses that links together experiment, computation, and theory, for designing materials with tailored functionalities. One of the important goals of Alabama’s NSF EPSCoR CPU2AL program is to support and mentor new young faculty as they begin to develop their careers. CPU2AL is proud to support Dr Chen through an augmentation of his startup funds, support for a graduate student through the CPU2AL CERIF GRA program, and mentoring by one of the senior co-Principle Investigators of the CPU2AL project, Prof. Yogesh Vohra.

When he is not doing research or teaching, he enjoys hiking at state parks with his wife and daughter.  Click here for more information about Dr. Chen and his research.