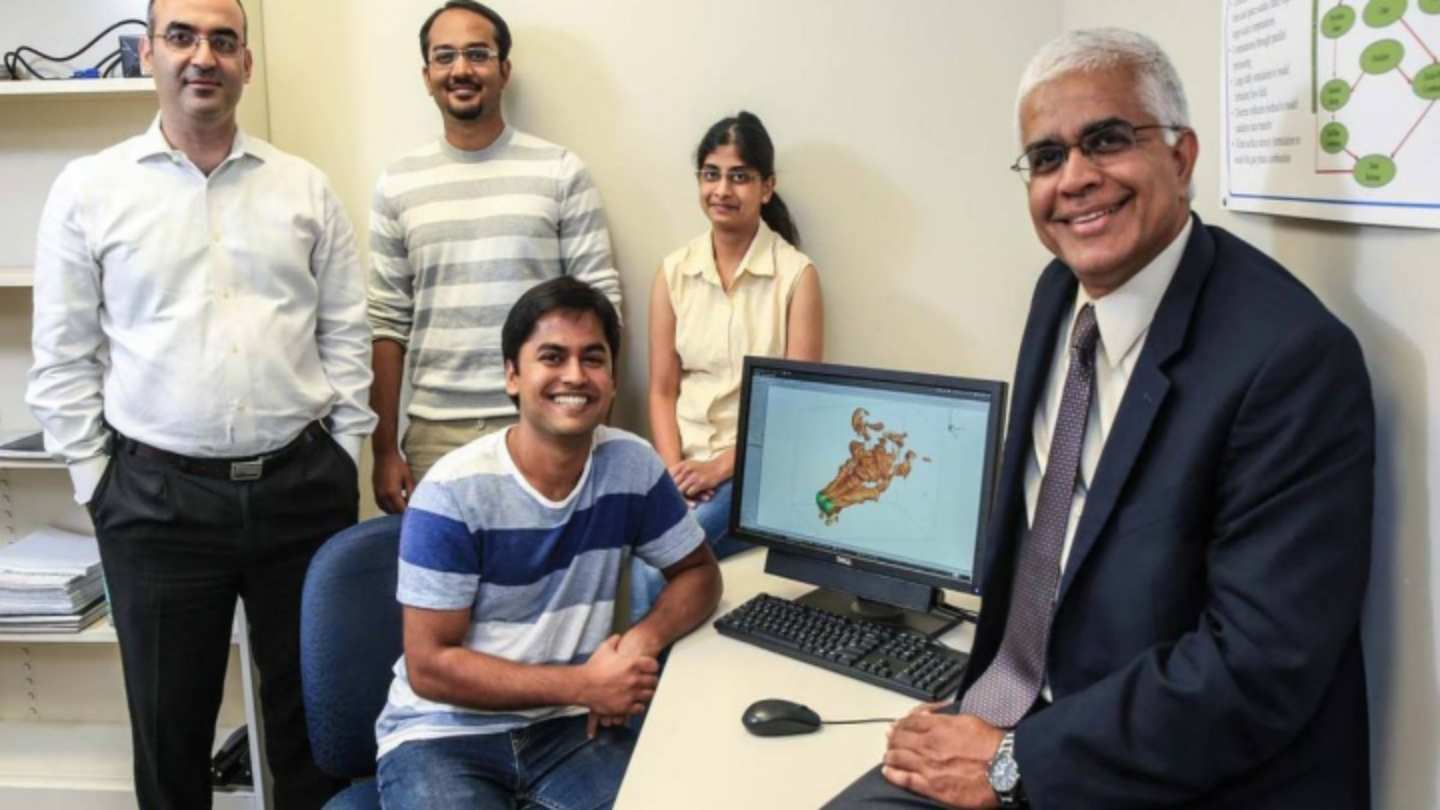 Imagine you are a student overseas with a burning desire to pursue a dream. Now, imagine further you believe the best way to do so is to leave your cherished mentor, family and home behind, and travel to a foreign land 8,000 miles away to study. That’s exactly what Dr. Satyajeet Padhi (Ph.D. Computational Fluid Dynamics, 2016) did when he came to The University of Alabama in Huntsville (UAH), a part of The University of Alabama System.

The spark that lit the fuse on Dr. Padhi’s daring journey came through an interest in space exploration, as well as the teaching methods of his first mentor, Dr. M. Balasubramaniam.

"I was already fond of rocket propulsion and space physics," he says. "It was also the way it was taught by Dr. M. Balasubramaniam, a veteran professor in the field of fluid dynamics. I started reading more about the topic in journal articles and technical briefs, mostly written by research teams from the U.S. More specifically, researchers at Marshall Space Flight Center in Huntsville. After some research on the courses offered by UAH, I decided to apply for the master’s program and got admitted."

Dr. Padhi’s decision was no fleeting whim, as he was leaving behind the only support network he had ever known.

"I had no relatives or friends in the United States. There was no one to guide me or share their experiences about life there. I researched over the internet, but in 2008 the information one could gather in India about a foreign university was not as good it is today. So coming to the U.S. was purely a leap of faith!"

Not surprisingly, Dr. Padhi’s transition to living on a different continent halfway around the world was rife with challenges and unexpected contrasts.

"The first few weeks were a cultural shock!" he says. "All my knowledge about the U.S. was limited to Hollywood movies, which are not very representative of the realities in the midwest and southern U.S. I landed on Dec 31, 2009, and it was bitterly cold for someone coming from the tropical hot and humid weather of India. The slang was different, and some of the words were different too, because India uses British English. I also had trouble converting everything from metric units to American units of measurement, and that trouble continues to this very day."

Getting acclimated to a new classroom environment proved an early adjustment for the young scholar as well.

"It was a lot different compared to classrooms in India," he says. "The professors had a different style of teaching, and class durations were almost double what I was used to."

Additional hurdles included passing the Test of English as a Foreign Language (TOEFL), as well as the graduate record examination (GRE), used to measure aptitude for abstract thinking in analytical writing, mathematics and vocabulary. For Dr. Padhi’s first mentor at UAH, Dr. Babak Shotorban, a professor in the Mechanical & Aerospace Engineering Department, the student’s experiences recalled his own coming here from Iran.

"Advising international students sometimes reminds me of when I was a graduate student from overseas," Dr. Shotorban says. "You study hard for TOEFL and the GRE to be qualified for admission. Then you get the U.S. student visa, which can be very involved itself, depending on where you are from. Sometimes the student visa applications are not approved, although all requirements are satisfied. Then, you arrive here with no family and friends. Some international students stay apart from their families for several years. But you meet new people and make new friends in the school, in the gym etc., and start adapting to life in the U.S."

Dr. Padhi agrees. "I was lucky enough to find a good set of friends. They were very accommodating and made the transition less turbulent. For the first time in my life I was making friends that were not Indians, and I was learning a lot about the American culture from them. Outside of the University, things got a little grim at times. Sometimes there was a feeling that I was being treated differently in certain places due to my nationality or physical appearance, but thankfully, that never happened in the University."

As he settled into his new home, the trick now became how to narrow his interests to a specific course of study.

"I saw a space shuttle launch for the first time on TV in 1999," he says. "The countdown to zero, lift-off and humans leaving the grip of Earth to venture into space gave me goosebumps! I got interested in space science and read about it whenever I could. Luckily, I was good in math and science and chose to study mechanical engineering in hopes of working on rockets one day. However, I was faced with a major restriction that only citizens and permanent residents could work on areas of rocket propulsion."

The doctoral student quickly learned of another field that helped him find his niche. It was an early course with Dr. Shotorban that opened the door.

"My first class with Dr. Shotorban was in Computational Fluid Dynamics (CFD). Graduate school encouraged me to pursue a project that could help me learn more about it. Nothing teaches you more than the struggles you experience during a project. Those in-class projects were the foundation stone for my career in CFD. I still have the notes from those classes and refer to them. When I decided to do a Ph.D., I reached out to Dr. Shotorban and he was kind enough to take me on as one of his graduate students."

For his part, Dr. Shotorban soon realized he had someone in his class who could develop a real passion for the subject.

"I was able to evaluate Satyajeet before recruiting him as a Ph.D. student," he says. "Students learn computational techniques in CFD classes to solve basic problems in fluid dynamics and heat transfer that cannot be solved without computers. These techniques make the foundation of the physics-based modeling of wildland and wildland-urban interface fires, a major area of research in our Multiphysics Flow Simulation Group (MFSG) and the area where Satyajeet performed his dissertation research. Dr. Padhi’s performance in these courses made me feel he could be successful both as a student and professionally in CFD. I also found him to be a fine person. This was important, since the nature of his research required him to interact with others in and outside the group."

Dr. Shankar Mahalingam, Distinguished Professor of Mechanical and Aerospace Engineering and Dean of the UAH College of Engineering, soon became one of Dr. Padhi’s advisors as well. He felt the student would be a good fit for the kind of things he had been collaborating on with Dr. Shotorban.

"We were working on a project funded by the National Science Foundation," Dr. Mahalingam says. "Dr. Padhi had gotten As in most of the graduate classes at UAH, including Dr. Shotorban’s, who is fairly tough in his expectations. We needed to hire a graduate student to work with us, and he had the skillset."

Dr. Mahalingam smiles when he recalls those early days working with his colleague-to-be. "It is different in India. You would not speak to a professor to say, ‘you are wrong,’ but we encourage it here, and at first it was hard for him to get used to that, but he learned quickly," he says with a grin.

Helping his mentors with projects like predicting the behavior of wildfires in turn helped Dr. Padhi obtain his doctorate in computational fluid dynamics. "The Ph.D. project with Dr. Shotorban had Dr. Mahalingam as one of the investigators," he says. "Dr. Mahalingam had just moved here from California where his team was working on the computational investigation of wildfires. He brought the work with him, and I worked on the computer code."

The collaboration proved so successful, Dr. Padhi went on to coauthor six papers with his advisors.

"Dr. Padhi was the lead author in five of those papers," Dr. Shotorban notes. "Satyajeet investigated two scenarios on shrub fire dynamics that I suggested as his primary advisor, for furthering our understanding of flame characterization in non-propagating shrub fires and shrub flame merging." Significant discoveries made during these cases provided the foundation for the student’s dissertation.

When Dr. Padhi graduated in 2016, he landed a job with Ansys, Inc., a company that develops multiphysics engineering simulation software for product design, testing and operation. But his professional path was not exactly straightforward, either, as it included a period of Optional Practical Training (OPT) in which graduates are permitted by the United States Citizenship and Immigration Services (USCIS) to work for one year on a student visa.

"I moved to Irvine, California," he says. "I had to go through the lottery system for an H1-B visa that allows foreign nationals to work in the U.S. I had three years during which I could apply for H1-B three times. But since the selection is based on a lottery and not on merit, I could have missed getting picked all three times! So I applied for a Permanent Residency (PR) in Canada for Skilled Workers, which is based on a merit-based point system. I received my PR in five months and moved to Canada. I still work for Ansys."

On a day-to-day basis, Dr. Padhi supports enterprise customers with simulation needs for their projects and manages the operations of the Icepak Support Team. "Icepak is a thermal management tool for simulating electronic cooling solutions which utilizes a computational fluid dynamics solver for thermal and fluid flow analyses of integrated circuits, packages, printed circuit boards and electronic assemblies," he explains.

As someone who has mentored 15 Ph.D. candidates, Dr. Mahalingam finds it satisfying to have been a part of Dr. Padhi’s epic journey. "That’s what drives us, that allows us to be at the cutting edge of the research," he says. "Graduate students are the ones who help us. Seeing their success professionally is rewarding. So much of it was encouraging him to keep pushing on. Getting a Ph.D. is a long and complicated process."

Both Dr. Shotorban and Dr. Mahalingam believe UAH can be a wonderful fit for international students, pointing to educational opportunities that are second to none.

"There are leading researchers here in some of the sub-specialties that are the top in the world," Dr. Mahalingam notes. "So for international students considering UAH as a destination, literally the sky is the limit, provided there is a good match with the student’s background and interests. The opportunities, research and expertise we have here equal anywhere in the world."