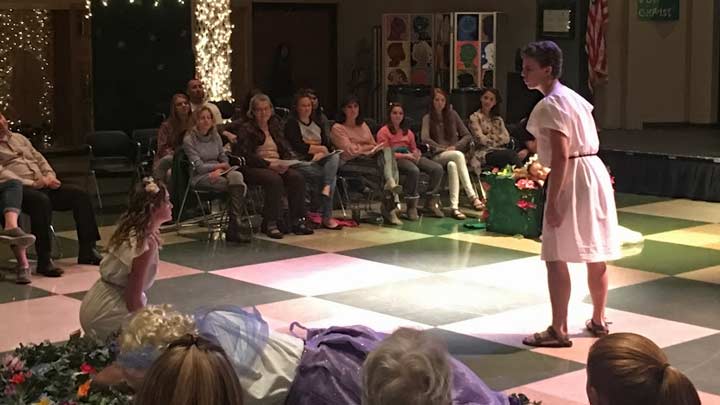 UAH alumna Samantha Smith directed and built the set for "A Midsummer Night's Dream." The performance is St. John Paul II Catholic High School's first production of a Shakespeare play. The production was set off the actual stage, among the audience, and with a minimalist set.

As a girl, Samantha Smith (’16 BA, Theatre) "pushed" to be in the center frame when a camera was filming. "I was constantly ‘performing,’ as a child. If I had cousins visiting, I created and organized a show to perform for the family. Throughout my childhood, I looked for every opportunity to be in front of an audience, or create a performance."

The University of Alabama in Huntsville (UAH) alumna is the technical theatre teacher at St. John Paul II Catholic High School in Huntsville. A native of Tupelo, MS, Smith moved to the Rocket City to attend UAH and major in theatre.

"I found out that UAH had a brand new theatre major, and I wanted to be part of a growing department, as they established their place in academic theatre," she said.

Smith became interested in performing arts while in high school. "Working in film was my idea of a dream job…because the school I attended didn’t have a film program, I decided to concentrate on theatre until I could transfer to a university," she said. "During my first semester as a theatre major, I fell in love with the craft. Film quickly became a second passion, and the theatre took primary focus in my life. I imagined a career in film but never considered working in theatre. It quickly became my home and the only way I want to spend my professional life."

Smith, one of the first students to graduate with an undergraduate degree in theatre from UAH, recalls having an amazing academic experience.

"It was liberating to attend a university with a department that was more inclusive," said Smith. "I had opportunities to pursue all my passions. I acted in the first main stage show of the season, managed a student production, and stage-managed the second main stage show; this gave me opportunities to learn in both fields that hold my interest, rather than focusing only on one," she added.

Although Smith acted in only one UAH production, The Laramie Project. Her favorite experience was stage-managing the play, Eurydice. "Though acting in Laramie was an amazing experience, and I learned a lot as an actor, I had a more diverse learning experience during Eurydice. Not only did I learn how to call a show with multiple facets (running water, doors being lifted via a pulley, and various microphone effects), I assisted in building the set," she said. "This set had running water, so I learned how to build a water pump system. In this show, I learned as a stage manager by doing, and as a director, set designer and constructor, sound designer, and light designer all because I worked one on one with the amazing faculty at UAH."

Professionally, Smith has acted in and stage-managed Shakespearean Theatre Company productions. Before coming to UAH, she worked with a film company and acted in many of their films, as well as held other jobs within the company. "While working in film, I worked with people like the well-known veteran actor, Lance E. Nichols (The Curious Case of Benjamin Button) and the singer Marty Stuart. I also worked alongside many talented local actors who have since been cast in many productions and films, all over the country."

While she admires several people in the acting and theatrical world Smith said it is impossible to choose one person. "I admire Hugh Jackman for excelling in film and musical theatre, as well as bridging the gap as a performer. Also Lin Manuel Miranda for creating more inclusive shows. And, I applaud Jonathan Larson for always working towards his dream, and creating a show that shed light on social issues impacting many Americans." Larson, a composer, and playwright died at 36, in 1996 of an aneurysm. Larson received three posthumous Tony Awards and a posthumous Pulitzer Prize in Drama for the musical Rent.

For now, Smith’s focus is on her students at St. John Paul II Catholic High School. She teaches two technical theatre classes. "Within those classes, I guide the students as we design and build the technical elements for the school’s shows," Smith said. "I design the sets for the shows, and the students and I implement the design. The students’ design and create props, sound, lights, makeup, and costumes—usually with a great deal of independence. The goal is to guide the students until they can start shows completely on their own. By the end of the process, the students are given the reins, and run the show," she added.

Smith said her degree from UAH is instrumental in her teaching position. "Without my university degree, I would not have the experience to oversee all the technical elements for productions, as well as the skill to delegate to students without overwhelming them with tasks."

The decision to not major in the Science, Technology, Engineering, and Mathematics (STEM) fields did not faze Smith a bit. "Although STEM careers are critical fields, more and more employers are looking for graduates with Liberal Arts degrees," she said. "Liberal Arts degrees show people how to think outside the box. We learn how to use our creative abilities for problem-solving methods in all areas. This set me apart from my more STEM minded coworkers," Smith said. "I’ve held many jobs outside of the arts, and my creative problem-solving has always been something that employers have appreciated."