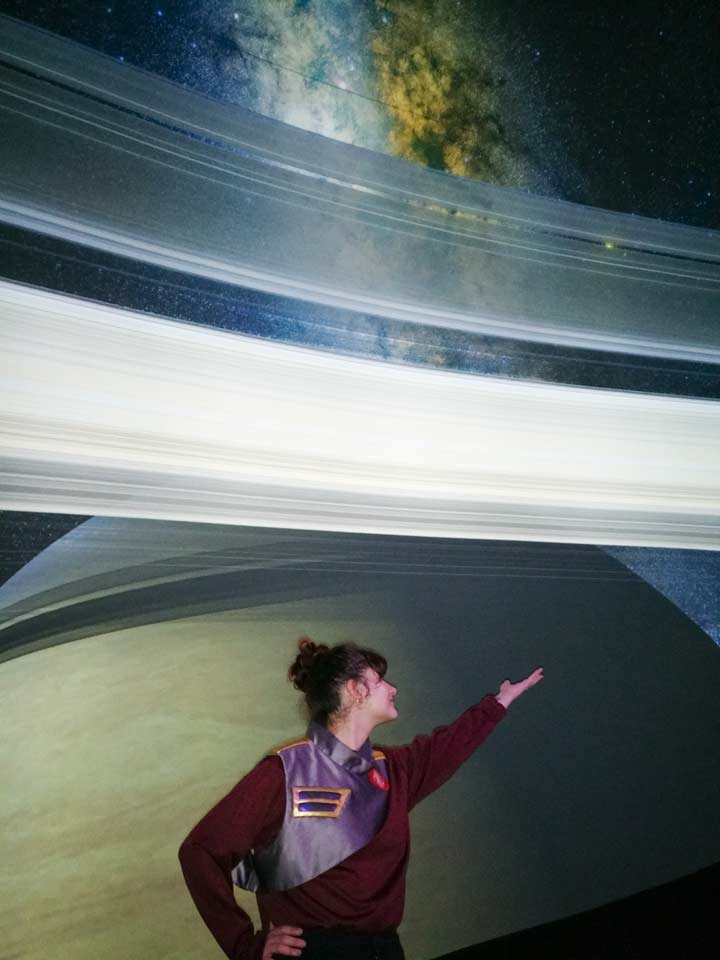 Hayley Johnson was looking forward to honing her performance skills at The University of Alabama in Huntsville (UAH) – she just didn’t expect to have to travel to space for her first official acting job! Each week, the freshman theatre major takes guests on a tour of the cosmos as Jesse, the host of "Destination Solar System" at the U.S. Space & Rocket Center’s INTUITIVE Planetarium. Jesse’s co-host on the Space Express Tour? The ship’s computer, Max, who steers them through the Asteroid Belt for a visit to the moons of Jupiter and Saturn and the surface of the sun.

"At the INTUITIVE Planetarium, we strive for excellent presenting skills and stunning accompanying visuals," says Planetarium Director A. David Weigel. "The energy that Hayley brings to Jesse is exactly what we are looking for in order to get the audience excited about touring through the solar system in this brand-new 8K planetarium."

Set in the future – 2096 – the show invites guests aboard a spaceship that can travel faster than those of the present day. "I do a little bit of improv, pretending it’s my first day on the job, and then I introduce the show," says Johnson. "I have a line where I say, "There’s no need for seatbelts, since this ship has advanced safety features," when of course they’re just sitting in regular seats." With the Planetarium’s Spitz NanoSeam Projection Dome serving as the flight deck of the spaceship, Johnson – as Jesse – provides real-time narration while the audience members are visually whisked across the solar system. "The computer, Max, is synchronized to the video, which means I have to get the timing perfect or he’ll talk over me," she laughs. "That’s the trickiest part!"

To land the job, Johnson memorized sides – short script excerpts – provided by the Planetarium. "It was scheduled like an interview, but there was an audition as well," she says. "After I read the sides, they asked me to sing a song from my favorite show, ‘The Last Five Years’, so I sang ‘Summer in Ohio’." One thing she didn’t have to do was learn a lot of facts about the solar system. "We have an astronomy educator who keeps us up to date," she says. "Though coincidentally I’m in astronomy class this semester, so I’ve learned some interesting things."

But while she "really loves" performing as Jesse at the Planetarium, she says she is more comfortable singing than acting. "I like the high energy of musicals," she explains. "So after graduation, I’m going to try to do musical theater, and if that doesn’t work out, I’ll get a master’s degree in theater and teach." Either way, she knows she’s off to a good start by coming to UAH and studying acting with assistant professor Amy Guerin. "When I visited last March and met Amy and saw how close and supportive the program is, I knew that it was the right place for me," says Johnson, who recently appeared in UAH Theatre’s production of "The Trojan Woman" as a member of the chorus. "It may not be a huge theatre program, but it truly is a hidden gem."