The NASA balloon program has been used as an introduction to experimental astrophysics for three generations of young scientists. Compared to space flight the relative informality and rapid concept-to-flight transition for balloon instruments creates efficient educational opportunities for both scientists and design engineers. Instrument recovery and refurbishment with performance improvements provides a means of developing instruments for future space flight investigations and enhance educational experience, while performing cutting edge scientific observations. The MSFC high energy astrophysics groups have flown numerous balloon-borne experiments since 1974. These experiments have produced more than a dozen PhD scientists and given hands-on training to many young engineers. Space flight instruments in astrophysics frequently have sub-orbital heritage.

The present director of SMD in recent testimony to congress, and at addresses to GSFC employees and at other forums, has cited the sub-orbital program as an excellent avenue to train the next generation of engineers as well as scientists. He has stressed the need to produce more science results and train more scientists and engineers within the limited resources available over the next several years. He suggested that more, smaller instruments from more scientific disciplines be considered for sub-orbital flights, and that multi-investigation payloads be considered. This was the subject of the recent “Low Cost Access to Near-Space” workshop, held in Boulder, CO, where the SMD director made a brief address.

A gondola that can carry a number of different scientific instruments on a single balloon flight has been designed, manufactured and flown on a test flight in support of NASA’s Exploration program. The Deep Space Test Bed (DSTB) was designed to utilize sub-orbital exposures on high altitude balloons in Earth’s Polar Regions as a window to the ionizing radiation in interplanetary space. The facility was designed to accommodate several science experiments and prototype instruments on a single integrated carrier that provides the mechanical structure, power, telemetry and instrument operation and control. The DSTB can support science investigations in all NASA disciplines: Astrophysics, Atmospheric, Earth, Heliospheric and Planetary Sciences. The National Space Science and Technology Center has laboratory facilities and experienced personnel at MSFC and University of Alabama in Huntsville (UAH) to support instrument integration and flight operations. The DSTB is suitable for any launch site that NASA’s balloon program utilizes. The DSTB was designed with simple and robust interfaces for mechanical, power and communications systems that are widely used by investigators. The simple interfaces give science teams without previous balloon flight experience the ability to quickly conduct their investigation, and it provides them with an introduction to scientific balloon operations.

The facility comprises the structural gondola, solar arrays or batteries for power, a power distribution system that manages power for the different instruments. It has a flight data system with standard interfaces that transfers the instrument data to the Columbia Scientific Balloon Facility (CSBF) balloon instrument package for telemetry and it controls and monitors the subsystems onboard. There is a ground support computer system that is used for testing during payload integration and serves as the ground station during flight operations.

The DSTB is designed to accommodate a total payload mass of up to 1800 kgs. (4000 lbs). It is designed to support circumpolar flights in the Artic and Antarctic lasting up to a few weeks. The facility has successfully completed an 8 hour test flight in New Mexico with several science instruments, demonstrating its capabilities and readiness for Antarctic operations. There are several instrument attachment points that provide different field’s of view: skyward, nadir or horizon. It also has the capability to carry instruments on booms extended away from the gondola as well as to sling instruments down below the gondola.

The power system is designed to provide 600 watts (550 watts for experiments) using solar arrays and batteries for long duration flights. Batteries can be used for short flights. Power is provided to each instrument through a switched, re-settable circuit breaker to isolate it from the rest of the instruments.

The on-board flight communication and data system (FCDS) provides individual communication links for each instrument and manages the system level functions. The power, communication rate and data storage resources are allocated among the instruments as needed for each flight. The command and data streams for each instrument are recorded on board. The FCDS can also deliver command lists to each experiment for autonomous operations. When the payload is within line-of-sight telemetry (<400 mi.), the FCDS feeds the high rate transmitter with bandwidth up to 1 Mbs. Over the horizon communication is available through a TDRSS allocation that has provided 6kps data rates in the past with nearly continuous coverage. The DSTB ground station serves as a repository for the data steam and permits the investigators access to flight data through the web so that they may monitor their instrument remotely from their home institution.

The facility and its operations have been designed to minimize the interface burden on the scientific teams. The instrument interfaces to the facility have been well documented. The high-bay facility at NSSTC is designed to support balloon flight payloads and is available for instrument integration prior to deployment. Members of the DSTB team have developed balloon instruments and conducted scientific flights for more than 3 decades and have participated in campaigns all over the world. The team members include scientists and engineers (electrical, mechanical, software). Two gondolas have been developed to insure availability of the facility for annual flights. While one gondola takes part in a campaign, the second is available for investigators to commence integrate their payload for a launch opportunity the following year.

The facility described here has already been constructed and its functionality demonstrated in a test flight. It is available for investigators to utilize on balloon flights provided through the NASA scientific balloon program. The DSTB and its support staff permit investigators with no previous balloon experience to easily take advantage of balloon flight for their research. The facility provides a clear and user-friendly interface and direct access to an experienced team. In this scenario the science instrument development remains with the experienced science team. This team can train young scientists and engineers in a mission environment that is more conducive to developing hands on experience while obtaining valuable scientific data. Additional details about this facility are available through the link and reference below. 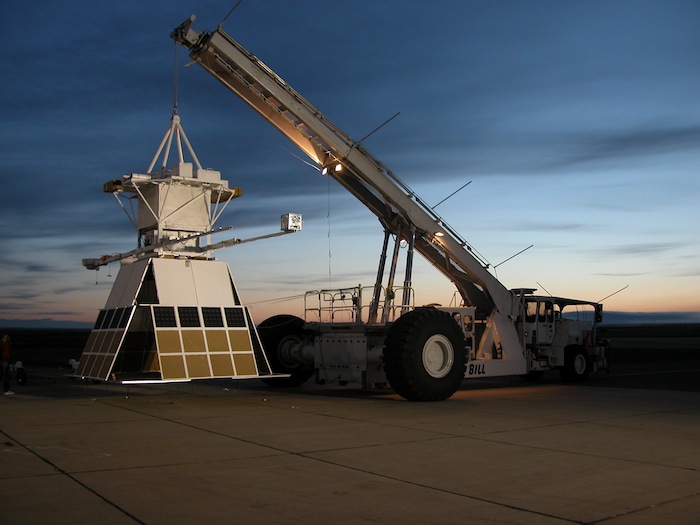