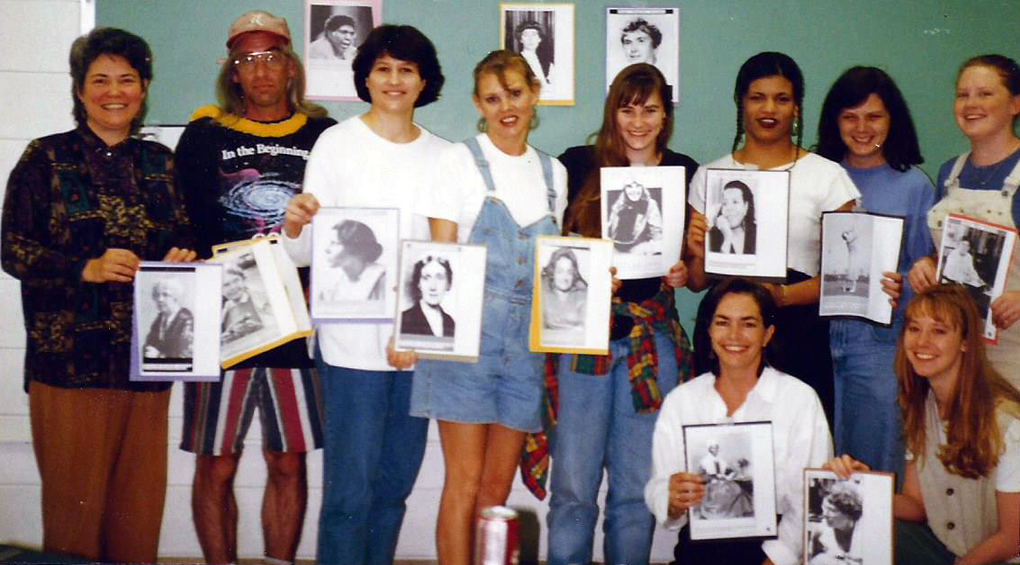 In the fall of 1990, Nancy Finley started talking to some UAH faculty who were teaching courses emphasizing gender. Rose Norman was teaching women writers, Sandra Carpenter was researching gender issues in psychology and wanting to teach psychology of women, Carolyn Sanders was interested in women in music, and Nancy herself was teaching a sociology course in gender roles. They soon created a Women's Studies Interest Group (WSIG) that began to have regular meetings, plan events, and publish a newsletter. They even got Roy Meek (former dean of Arts, Humanities, and Social Sciences) to lend some office space for a Women's Studies Resource Center, and they began collecting books, periodicals, posters, and memorabilia of the women's movement. Soon students formed a Women's Studies Student Organization, which later became POWER (People Organized for Women's Equality and Rights).

They formed a steering committee to collaborate on activities. In Fall 1993 it included:

From the beginning they involved people from the community as speakers, performers, workshop leaders, and fundraisers. In 1995 Terry Williams, a local social worker, came to them to see if they would like to co-sponsor a National Women's History Month essay contest for high school students that she had been doing through her organization H.E.R. Place. The 1995 competition would honor the 75th anniversary of the Woman Suffrage amendment to the U.S. Constitution. Terry provided cash prizes, and WSIG hosted the awards ceremony at UAH. That competition continued for more than 10 years, and was joined by an essay competition for UAH student this is still going.

The first Women's Studies Resource Center opened in May 1992 in Morton Hall 216A, the outer office of Roy Meek's office, where Dr. Meek had been storing some files he decided could go to the basement. WSIB had no funding for a student worker, so the Resource Center was staffed entirely by volunteers, originally led by UAH librarian Susan Herring, and later by librarians Margo Mead and Debbie Holmes. Early student volunteers included Susan Trentham (Psychology graduate student) and Cindy Hughey (Sociology major). When the Women's Studies program became a minor in 1995, most of the tiny budget went to pay a student worker to keep the Resource Center open, catalog books, and assist the Director in many ways. By the summer of 1998, the Resource Center had expanded to the inner office and sported a donated computer and library software for cataloging the donated books. Eventually, it moved to its present location in MH 290.

Task Force on a Minor in Women's Studies

As early as May of 1992, WSIG sent a letter to faculty soliciting information about courses they were offering, or planning to offer, relevant to Women's Studies, as part of a discussion about developing a curriculum for a Women's Studies minor. In July of 1993, Jack Ellis, Dean of Arts, Humanities, and Social Sciences, charged a task force with studying the feasibility of a minor, and appoint eight faculty:

That Task Force's first proposal, completed in February 1994, was rejected by the University Curriculum Committee in a memo from Associate Provost Carolyn White to Provost Sam McManus. The Committee supported the program in principle but requested further study and revision. Nancy Finley, Rose Norman, and Sandra Carpenter meet with Dean Ellis over the summer to discuss how to proceed. They decided to revise and resubmit the proposal, which was resubmitted December 15, 1994, and unanimously approved by the University Curriculum Committee in February 1995. In May, Provost McManus rejected it, saying that there was no money to fund the program (McManus Memorandum of May 12, 1995). The proposal budget had requested $8500, of which $1250 was for one-time costs for back issues of journals for the UAH Library. Almost half of it ($3950) was to support faculty teaching the new Introduction to Women's Studies course once a year.

In August, the task force sent Provost McManus a memo asking for a meeting to discuss the funding challenges. The memo provided suggestions for "phased implementation" and argued in part that "the overall cost/benefit analysis of a Women's Studies minor makes it the kind of program that is desirable when there is a need to maximize the use of existing resources. Most of the resources (courses, interested faculty and students, etc.) are already in place. With minimal support, these resources could be woven into a viable program that would attract new students and energize current faculty and students. It is our desire to explore other ways in which UAH can maintain the momentum in developing women's students without losing the efforts already invested" (August 15, 1995). The provost's office scheduled a meeting with the task force for August 25, 1995.

At the August 25 meeting with Associate Provost White and Provost McManus, the provost completely surprised the task force by announcing that he was approving the proposed Women's Studies program, but with a budget of $1000 and a shared staff assistant (the official memo approving the program is dated September 14, 1995). Women's Studies would have to make ends meet through their own fundraising activities.

The surprise approval of the Women's Studies minor at the beginning of the fall semester (after two previous rejections, in 1994 and 1995) left the WSIG steering committee scrambling. They needed a Director of Women's Studies (with no stipend and no release time); they needed to start publicizing the program and recruiting students, planning the new courses WS 200 Introduction to Women's Studies to be offered in spring 1996--and fundraising.

Rose Norman, Nancy Finley, and Sandra Carpenter had been the key players on the task force and in WSIG, so the director had to be one of them. Since Rose had a one-course release for directing another program (and the other two were teaching full load), she agreed to be Director, and they agreed on how they would make this work. Rose would keep up with administrative requirements, publicize the program, and continue to work on events planning and fundraising. Nancy would continue to do the newsletter and would develop and teach the first WS 200 class. She would also do most of the student advising and would develop the advising forms used for tracking minors and getting them into the system. From that day on, every advising form came from her. And she brought in the minors. By 1996-97 Women's Studies had ten minors, and by 1997-98 that was up to fifteen (annual report to the dean for 1997-98).

Sandra Carpenter would head the curriculum committee and pursue things like getting WS 200 Introduction to Women's Studies approved to count as a General Education Requirement (GER). WS 200 was approved for the Arts, Humanities, and Social Sciences GER in 1996 and subsequently became part of the GER in other colleges. In the end, Dean Jack Ellis allowed Rose an extra course release for setting up the program that first year. The lack of routine release time or stipend for the Director continued until Nancy Finley became Director and figured out how to make appropriate changes.

WS 200 Introduction to Women's Studies has been taught every year since 1996, always drawing on a wide array of faculty as guest lecturers on their areas of specialization. Dr. Nancy Finley (Sociology Dept.) taught it the first three years, and then began semi-alternating years with Dr. Rose Norman (English Dept.), who taught it the next three years. One year in the 2000s Dr. Sandra Shattuck (English Dept.) taught it, and Dr. Molly Johnson (History Dept.) taught it through her time as WGS Director, including when it became WGS 200 Introduction to Women's and Gender Studies. The course is currently taught by Dr. Suzy Friedman (English Dept.). While that first class enrolled only 15 student, by 1998 the class was averaging over 30 students, in part because of being added to the General Education Requirement (GER) for the College of Arts, Humanities, and Social Sciences and the College of Science.