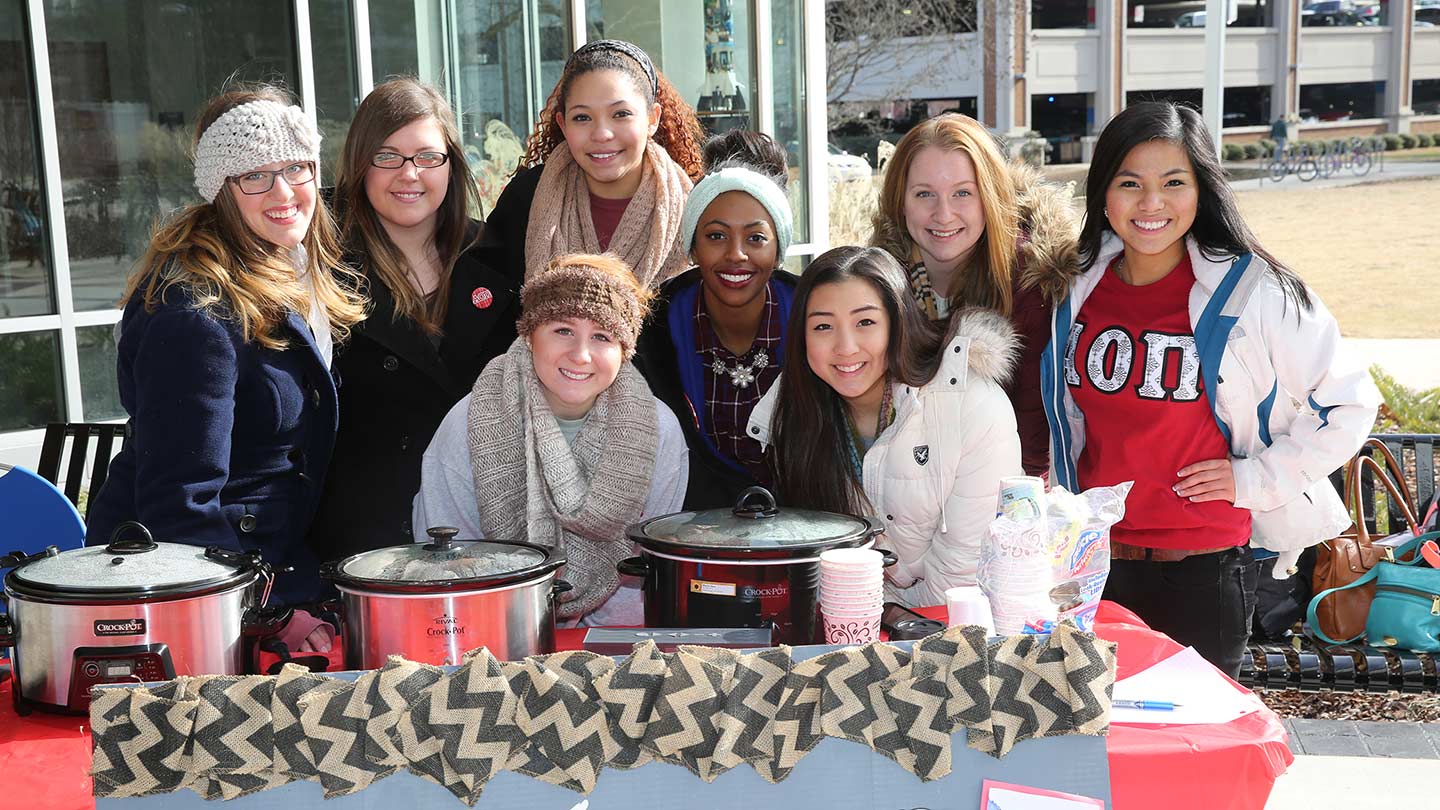 The first sorority founded for African American women, Alpha Kappa Alpha strives to cultivate and encourage high scholastic and ethical standards; promote unity and friendship among college women; maintain a progressive interest in college life; and to be of service to all mankind. The Omicron Zeta Chapter was chartered on the campus of UAH on May 31, 1987.
aka@uah.edu

Alpha Omicron Pi was founded on January 2, 1897 and currently has over 190 international chapters. We are a sorority that focuses on women enriched through lifelong friendship who stand at all times for character, dignity, scholarship, and college loyalty. The values on which AOII was founded help lead us in the decisions we make and the behaviors we exhibit in our daily lives. We are inspired to promote the values of simplicity, integrity, circumspection, tolerance, generosity, personal dignity, and love. Our lives are to be living symbols of these values that we hold in common. They enable us to go with character and confidence into the world around us, confidently knowing AOII is ours offering friendships and opportunities throughout our lifetime.
aoii@uah.edu

On August 7, 1990 the campus of The University of Alabama in Huntsville became the seat for the Rho Chi Chapter of Alpha Phi Alpha Fraternity Inc. The chapter is actively involved on campus and in the Huntsville community. Indeed, we are alive and well, and continue the journey first embarked by the early trailblazers in their quest to become first of all, servants of all and to transcend all.
aphia@uah.edu

Alpha Tau Omega is America's Leadership Development Fraternity that places emphasis in the categories of scholarship, fellowship and character. Founded in February of 1979: The Theta-Pi chapter of Alpha Tau Omega is a Top Tier fraternity with a mission to uphold the vision of our founders and to sculpt college men into better leaders.
ato@uah.edu

The brothers of Delta Chi believe that great advantages are to be derived from a brotherhood of college and university men, appreciating that close association may promote friendship, develop character, advance justice, and assist in the acquisition of a sound education. Founded in 1890 as a professional fraternity for law students, the organization became general (accepting members from all educational backgrounds) in 1922.
deltachi@uah.edu

Delta Sigma Theta Sorority, Inc. is a predominantly black Greek lettered sorority, founded by 22 collegiate women on January 13, 1913. The founders' focus for the sorority was public service, scholarship, and sisterhood. The Omicron Gamma Chapter was chartered at UAH on September 20, 1980 by 8 women, and for over 30 years the Omicron Gamma Chapter has contributed continued service not only to the UAH campus but as well as surrounding areas through community service projects and programming.
deltasigmatheta@uah.edu

Founded on October 24, 1902 at Miami University in Oxford Ohio, Delta Zeta is one of the largest sororities, with more than 150 collegiate and 250 alumnae chapters worldwide. Delta Zeta unites its members in the bonds of sincere and lasting friendship, encourages the pursuit of knowledge, promotes, the moral and social culture of its members, and helps sisters develop plans for guidance and unity in action.
deltazeta@uah.edu

Kappa Delta Sorority is a national organization for women committed to: inspiring our members to reach their full potential; preparing our members for community service, active leadership and responsible citizenship; creating opportunities for lifetime involvement through innovative and responsive programs, and strategic collaborations and partnerships; and fostering the development of our time-honored values within the context of friendship.
kappadelta@uah.edu

On January 9th, 1914 at Howard University in Washington, D.C., three young men founded Phi Beta Sigma Fraternity, Inc to exemplify the ideals of Brotherhood, Scholarship, and Service while being guided by the motto "Culture for Service and Service for Humanity." Ever since its founding, the fraternity has viewed itself as 'a part of' the general community rather than 'apart from' it. What started as one chapter has now grown to over 700 chapters and 200,000 brothers internationally. The Alpha Sigma Alpha chapter was officially recognized at UAH in March 2007, and continually strives to be the beacon of light envisioned by the founders through philanthropic, educational, and community service projects on the university campus and surrounding communities.
phibetasigma@uah.edu

Phi Kappa Psi was founded at the UAH in the Spring of 2014. Phi Kappa Psi is a fraternity that is dedicated to academic excellence, personal integrity, and the respect and dignity of others.
phikappapsi@uah.edu

Pi Kappa Alpha is dedicated to developing men of integrity, intellect, and high moral character and to fostering a truly lifelong fraternal experience. Pi Kappa Alpha promotes and fosters a spirit of pride, loyalty, inclusion and respect for the fraternity and its rich history and empowers undergraduate and alumni members to help shape Pi Kappa Alpha's future by being informed ambassadors and involved advocates. Members strive to establish positive and lasting relationships with UAH, alumni and communities. It is through these standards of life that allow the men of Pi Kappa Alpha to truly be scholars, leaders, athletes, and gentlemen.
pikes@uah.edu

Sigma Nu was founded upon the principles of Love, Truth, and Honor, which is still present today in the men of the Mu Beta chapter. Sigma Nu takes a firm stand against hazing and Mu Beta takes pride in upholding this standard. Founded at Virginia Military Institute, Sigma Nu is a military structured fraternity, with organization, discipline and respect throughout all members of the fraternity. Now, Sigma Nu is recognized for its commitment to outstanding leadership and academics.
sigmanu@uah.edu

Zeta Phi Beta Sorority, Incorporated was founded on January 16, 1920 on the campus of Howard University by five courageous young women. The sorority's founders' stood on the principles of Scholarship, Service, Sisterly Love, and the Ideal of Finer Womanhood. As a community-conscious, action oriented organization, Zeta Phi Beta continues to reach the masses through community outreach programs, funding scholarships, supporting organized charities, promoting legislation for social and civic change, and more. The Outstanding Omega Tau Chapter was chartered on March 2, 2012 at University of Alabama in Huntsville. The chapter commits to the service of mankind through volunteering and educating the UAH and Huntsville community.
zetaphibeta@uah.edu