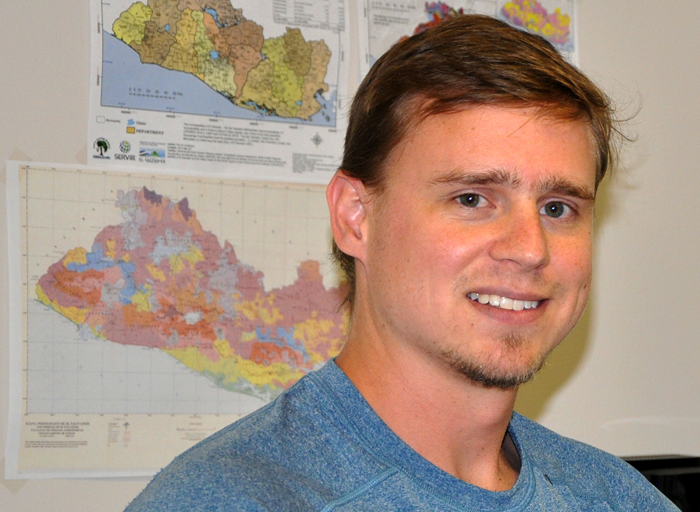 HUNTSVILLE, AL. — Eric Anderson was a research scientist in Central America studying natural disasters (and how to reduce their impacts) when he was introduced to UAH.

UAH’s Atmospheric Science Department was working with Anderson’s employer — a research and education center in Panama — to set up a summer study abroad program for students, so he had a chance to meet and work with several members of UAH’s atmospheric science faculty.

He must have been impressed. Almost four years later, Anderson, 27, is the first person to earn a master’s degree in UAH’s new Earth system science graduate program. And his thesis research? Looking at ways to use geographic information systems (GIS) and satellite remote sensing to make better forecasts and more timely warnings of a specific natural disaster — landslides — in El Salvador and, by extension, other countries in Central America.

A Texas native who earned his B.S. in Canada, Anderson spent three years in Central America working with the Water Center for the Humid Tropics of Latin America and the Caribbean (CATHALAC) and NASA’s SERVIR (Spanish for “to serve”) program.

During those years he learned about the problems people in Central America face dealing with landslides, floods and other natural disasters, and how few resources local governments have for reducing the risk of those disasters.

“Every rainy season we were dealing with these events, which unfortunately can claim hundreds of lives,” Anderson said. “The local and national governments would come to us asking, ‘Can you outline the extent of the flood or the landslide or the fire?’ When you do that over and over again, you realize there are gaps in the system.”

Because so little weather data is available in Central America, Anderson and his faculty advisor, Dr. Rob Griffin, looked at whether data from NASA’s Tropical Rainfall Measurement Mission (TRMM) might be used to provide useful information about rainfall. Because heavy rain can loosen soil — which can lead to landslides — getting accurate rainfall measurements is a key tool in forecasting landslide threats.

While rain gauges are sparse over most of Central America, they are less rare in El Salvador. That gave Anderson the “ground truth” information he needed to determine that the TRMM data is accurate enough to use in areas where there are no rain gauges.

“His research results have been featured in national and international conferences,” said Griffin. “Eric is constantly thinking about how to tackle important problems using GIS and remote sensing.”

Classes and his thesis research weren’t the only things keeping Anderson busy. He also initiated and conducted outreach classes at local schools.

After seeing a new type of sensor being explored by NASA scientists one door down in the National Space Science and Technology Center, he suggested to a faculty member that similar sensors might be useful in monitoring areas prone to landslides. The professor thought it was a great idea — especially if Anderson wrote the funding proposal. He did, leading to a $56,000 university grant to buy the hardware needed to create and test a dozen sensors. That work continues, with two graduate students using those instruments as part of their thesis research.

While he would like to continue his work in Central America, for the present Anderson has joined the research staff at UAH. He is continuing his work with SERVIR, testing an Earth-observing telescope aboard the International Space Station, and working with the landslide sensors.