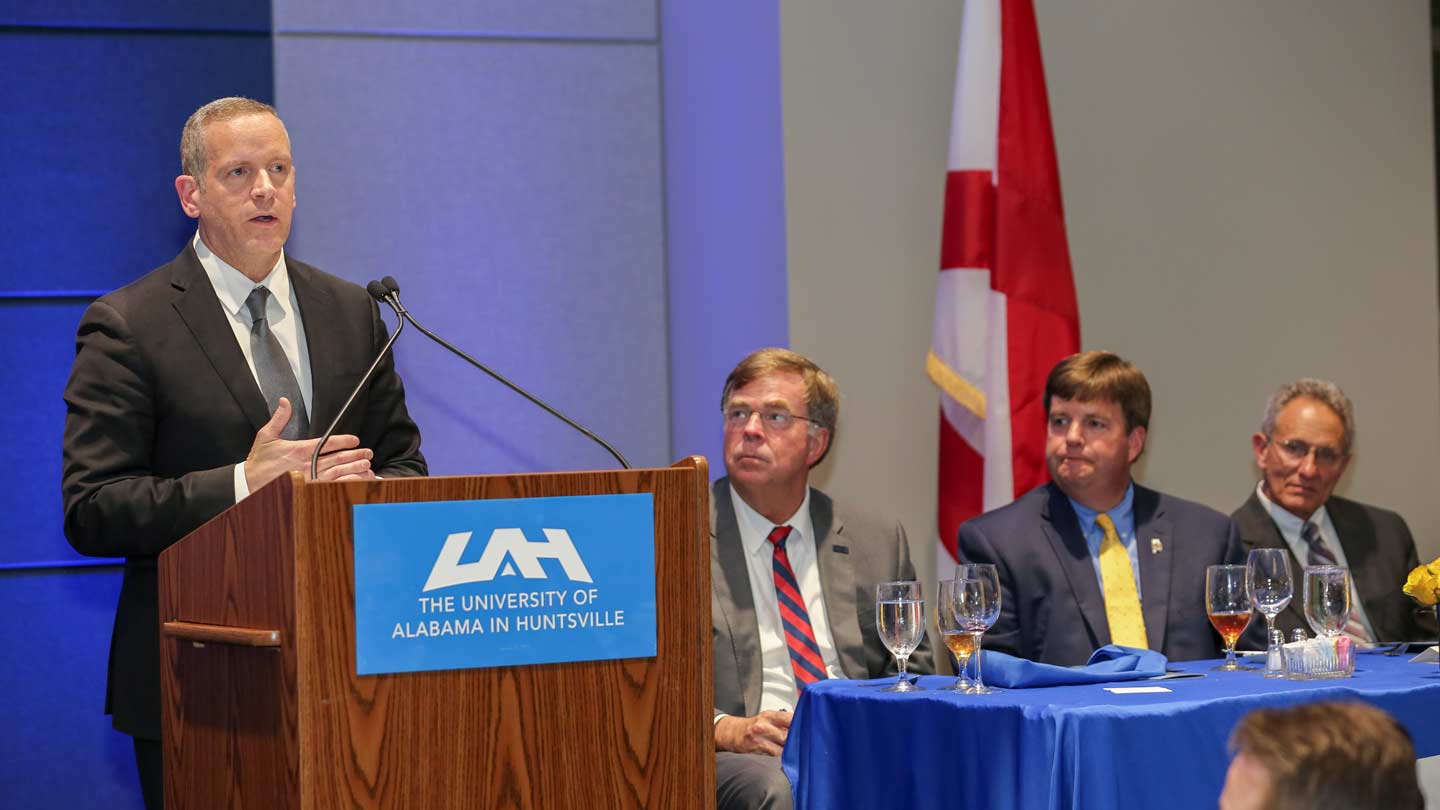 We’re moving a large portion of headquarters functions that will be coming to Huntsville,” said Paul Abbate, associate deputy director of the FBI, in a speech at UAH.

Huntsville is a smart place to be for a new FBI operations support center being constructed on Redstone Arsenal, said Paul Abbate, associate deputy director of the Federal Bureau of Investigation (FBI), in a speech at The University of Alabama in Huntsville (UAH) on Thursday, May 16.

"We see it as a great opportunity we are excited about and I am very excited about," Abbate said. "We know that you have a highly skilled, highly educated workforce and a new crop is constantly coming out of the university, and we want to tap into that."

When it comes online in 2021, the new center now under construction will employ 1,500, a significant expansion from the "several hundred" FBI employees already on Redstone, Abbate said, adding that the center is a big part of the future for the FBI.

"We’re moving a large portion of headquarters functions that will be coming to Huntsville," Abbate said.

"When we look at 10 years, 20 years, even 50 years out, the possibilities are endless," Abbate said. The new center continues the long history of the FBI in Huntsville that dates back to 1971, he said.

The city’s deep engagement with technology was one aspect that attracted the FBI, Abbate said, as technology is of increasing importance to the FBI’s investigations. The FBI has a total of 1,600 acres available in Huntsville for expansion.

Abbate spoke at UAH as part of the university’s Distinguished Lecture Series. The series brings nationally recognized guest speakers to Huntsville to enhance community collaboration and assist the development of Redstone Arsenal. It fosters better understanding of current events and future trends, how they impact the federal organizations at Redstone and how they could influence U.S. reaction to world events and the nation’s future exploration, discovery and technological development.

He was named the associate deputy director of the FBI in February 2018. In this position, he is responsible for the management of all FBI personnel, budget, administration and infrastructure.

Abbate began his FBI career as a special agent in March 1996, assigned to the New York City Field Office, where he worked in the Criminal Division and served as a member of the SWAT team.

Prior to being named associate deputy director, Abbate was assistant director in charge of the FBI Washington Field Office, where he served until his appointment as the executive assistant director over the Criminal, Cyber, Response and Services Branch from December 2016 to February 2018. In this capacity, Abbate oversaw all FBI criminal and cyber investigations worldwide, international operations, critical incident response and victim assistance.

The FBI has been the target of criticism over the past couple of years surrounding the presidential election, Abbate said, but that has not affected the agency’s readiness or investigative abilities.

"There’s a lot we’ve learned from that, and we take it to heart," he said.

Only one or two cases have attracted criticism, involving a small number of individuals who are no longer with the organization, Abbate said.

"The work we do each and every day at the FBI was never impeded by those events," he said. "The people across the FBI will work relentlessly to keep safe and to protect the USA, always."

The bureau has 37,000 total employees and legal attaché offices in more than 80 countries involved in that effort, he said.

The 9/11 terrorist attacks broadened and changed the way the FBI operated, Abbate said. Communication is much more fluid in the wake of that event.

"We’ve moved from siloed to interconnected communications," Abbate said. "We in the FBI now have a very well-matured intelligence operation, with over 3,000 employees in that area."

The bureau’s field agents and office task forces share information constantly, he said, since the nature of threats and criminal activity is changing.

"It’s way more complex than ever before, in particular with all the technology coming at us," Abbate said.

The FBI is still focused on large terrorist organizations like ISIS, but single individuals are an emerging threat, he said.

"More recently, what we see in greater volume is homegrown violent extremists, or HVEs," Abbate said.

Traditional communications surveillance technologies are not as effective against HVEs, he said, because they are "homegrown terrorists" who are online receivers of information that they then use in attacks intended to spread an ideology. That scenario means there is little or no ongoing online communication between them and a sponsoring terrorist organization.

"They are looking at doing attacks on a smaller venue," Abbate said, like places of worship, shopping centers and concerts. "They are also utilizing smaller weapons and bombs."

There are homegrown terrorist plots and acts occurring across the country, Abbate said, adding that there are more than 5,000 active cases being worked by the bureau.

"We’ve had hundreds of arrests on both the international and the national terrorist fronts," he said.

In another area in which the FBI is involved, cybercriminals are succeeding at "breach after breach across all sectors and at all levels," Abbate said.

In a new twist, he said nation states are sponsoring cybercriminals, a relationship in which the criminal gets personal information that can be monetized, and the sponsoring nation gets intelligence from the same breach.

As an example, Abbate said in 2017 two Russian intelligence officers worked with hackers in a broad breach at Yahoo! in which lots of user data was stolen.

Large volumes of data involved in investigating and solving these crimes, he said.

"Countries like China, Iran, North Korea and Russia are seeking any economic advantage over our country they can get and they are working diligently to do that," Abbate said.

In one such event, China attacked Lockheed Martin through U.S. Dept. of Defense channels to get intellectual property about U.S. fighter planes, Abbate said. The cost of the damage was estimated at over $100 billion.

"They have a long view, and they are very patient and persistent and calculated in the way they do that," he said.

One such effort is aimed at controlling the availability of illegal opioids, he said, noting that in 2017 alone 72,000 Americans died from their abuse.

"We have been working closely with our state and local partners to investigate the distribution networks," he said, pointing to the recent arrests of credentialed healthcare workers such as doctors and nurses who are alleged opioid suppliers.

"The task force community is stronger than ever," Abbate said.

The bureau is moving into more private sector partnerships as the complexity of threats increases, he said.

The move makes sense, Abbate said, because "the private sector controls almost 90 percent of the infrastructure we are trying to protect."