Moon Express: The Race Back to the Moon and the Future of Commercial Space Flight (with ASQ)

[NOTE: This is an archived event and is kept here for informational purposes so you can see information about past events and have an idea of what future events might be held. For those interested in current and upcoming events, see our Upcoming Library Events page.]

This is a joint talk with the American Society of Quality. The March monthly guest will be Tim Pickens, talking about the race back to the Moon and the future of commercial space flight. Tim Pickens' biography reads:

Tim Pickens is an inventor, entrepreneur, engineer and educator. He is Vice President of Propulsion for Moon Express, a privately funded lunar transportation and data services company created to establish new avenues for commercial space activities beyond Earth orbit. He most recently served as Commercial Space Advisor and Chief Propulsion Engineer for Huntsville, Alabama-based Dynetics.

Tim founded Orion Propulsion, a Huntsville aerospace company, in 2004 and sold it to Dynetics in 2009 after growing it to a 40-employee, $6.4 million business. Within five years, Orion had received multiple Small Business awards and become AS9100 certified to build man-rated flight hardware. Before founding Orion, Tim worked for small hardware-rich aerospace companies in Huntsville, as well as serving as lead propulsion engineer for Scaled Composites on SpaceShipOne winner of the $10 million Ansari X Prize.

Popular for his inspiring, genuine and humorous speaking style, Tim is recruited to give presentations at business, space and motivational conferences all over the country. He has also been featured in national media for his inventions and innovative accomplishments. Tim has received numerous awards for business and technical accomplishments.

The agenda for the meeting reads as follows:

As noted, this is a monthly meeting for the ASQ. Non-member attendees are asked to be respectful of society business.

This talk requires RSVP by March 7th to guarantee a free spot. Food will be provided (at no cost) but you must contact Dr. Belinda Ong at ongb@uah.edu (or by phone at 256.824.6432) prior to meeting. 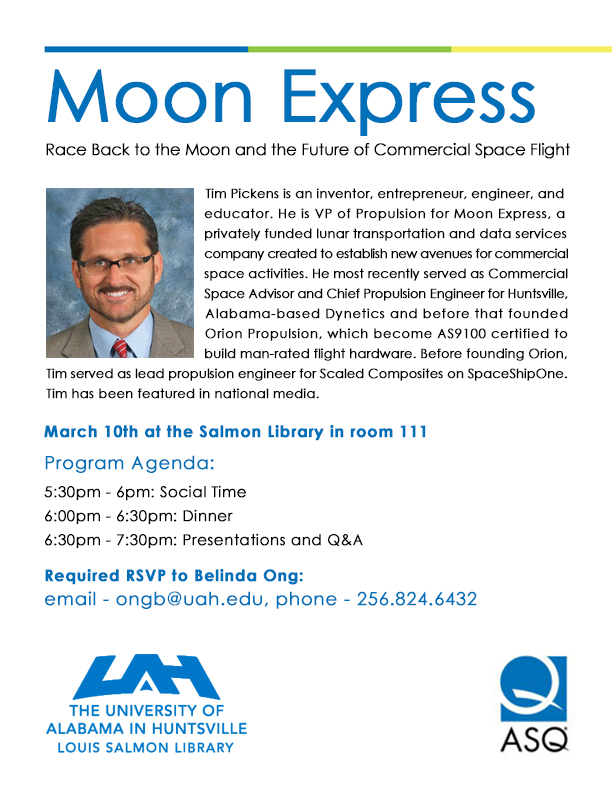 Elsevier's Education Week 2020
Elsevier is hosting a series of free online webinars hosted by the editors of high-impact journals which will discuss publishing and promoting your research.
Read more ...
New Academic Year Resolutions & Librarian Greet (with Treats): Week of Welcome Fall 2020 at the Library
For the Fall 2020 Week of Welcome, the Salmon Library will have an online New Academic Year Resolutions page and a socially distanced Librarian Greet (with treats).
Read more ...
Curbside Pickup Now Available
Starting this week, the Salmon Library will have curbside pickup for people needing to check out physical books.
Read more ...
Happy Birthday, Sir Arthur Conan Doyle: or, 22 Pieces of Sherlock Holmes Trivia
The Salmon Library has been celebrating Sir Arthur Conan Doyle's birthday on social media this week. Here are the twenty two pieces of trivia that were chosen to highlight the author's most popular creation.
Read more ...
Sources for Asian Pacific Heritage Month: Fiction and Popular Non-Fiction
May is Asian Pacific American Heritage Month. In this post, we look at ways to find recent fiction and popular non-fiction titles to read in celebration.
Read more ...
I AM A...