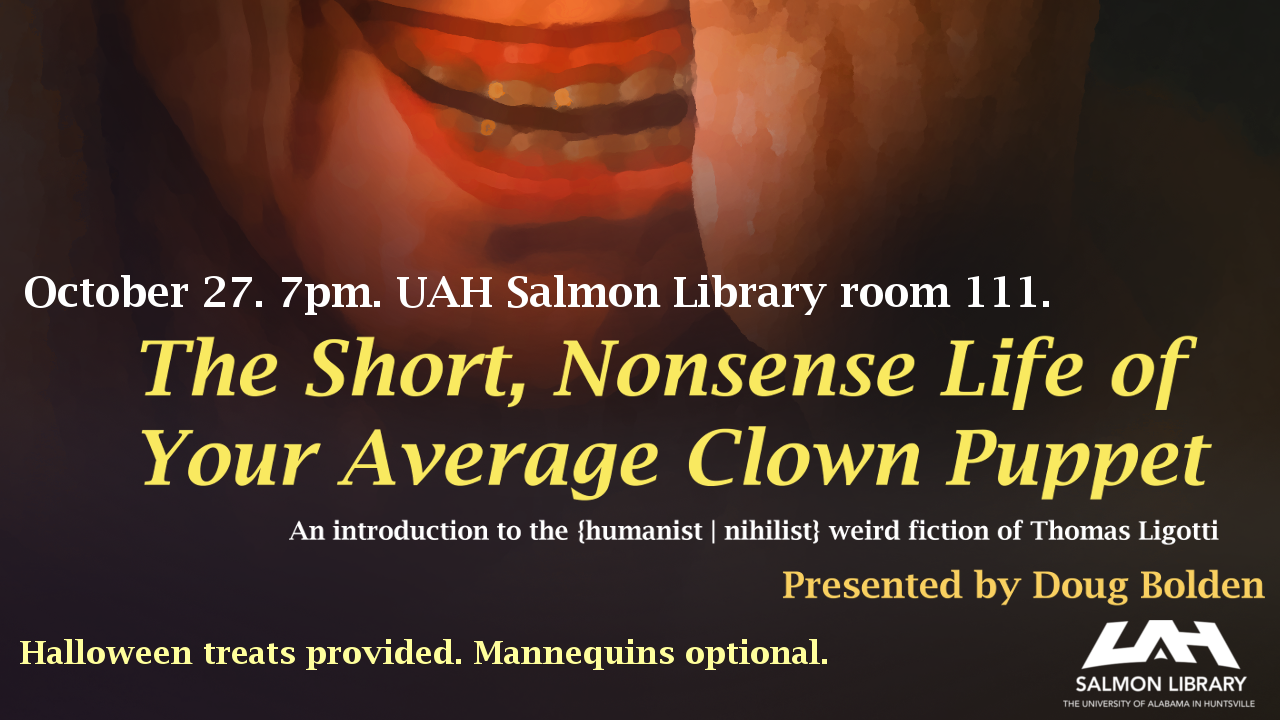 October 27. 7pm. Salmon Library 111. Thomas Ligotti is a highly influential writer of weird fiction whose short stories deal with themes of nihilism, humanism, anti-humanism, despair, creativity, and surrealism. His poetic prose and characters descending into chaos and madness has all the flair of a Samuel Beckett play, if Beckett wrote for the Grand Guignol. He has become one of the few living authors to be honored by a Penguins Classic collection and his older collected editions are now collector's items of some value. In this talk, Doug Bolden [doug.bolden@uah.edu] will look at some of Ligotti's most powerful tales, his impact on the genre [including some of the controversy about how his nihilism may have been an uncited source for the first season of True Detective], the works (both fiction and philosophy) that have influenced Ligotti, and how to find out more of his evocative darkness. Halloween treats will be provided. Mannequins are optional.

As a bonus, after the talk, there will be a complete showing of Jacob Cooney's short horror film, "The Frolic," based on one of Ligotti's first ever short stories!

This event is free and open to all!

It has always seemed to me that my existence consisted purely and exclusively of nothing but the most outrageous nonsense...At times I have been rendered breathless by the impeccable chaoticism, the absolutely perfect nonsense of some spectacle taking place outside myself, or, on the other hand, some spectacle of equally senseless outrageousness taking place within me. (Thomas Ligotti, "The Clown Puppet")

Cambridge Open Access to Host Webinar: The OA Advantage
Cambridge Open Access will host a webinar about the advantages of open access on May 11 (@2pm).
Read more ...
UAH announces faculty promotion and tenure decisions for 2022-2023 academic year
UAH announced that 26 faculty members have been recognized for their outstanding performance and overall excellence by being awarded tenure and/or promotion effective the 2022-2023 academic year.
Read more ...
Salmon Library Part of New ScienceDirect Contract Along with UA System and Other Alabama Campuses
The UA System, the Auburn System, and other Alabama college and university campuses have entered into a new, multi-campus agreement with Elsevier.
Read more ...
Military Service: A History in Postcards - Traveling Exhibit Coming to the Salmon Library this January
In January 2022, Troy University Libraries' traveling exhibit - Military Service: A History in Postcards - will be on display at the M. Louis Salmon Library.
Read more ...
Avoid the Holiday Rush for your ILL requests
The upcoming winter break will bring some interruption to our Interlibrary Services. Avoid holiday ILL delays by getting your requests in soon.
Read more ...