Charles (Chad) Zolynsky is an instructor for Professional Development Solutions at The University of Alabama in Huntsville (UAH). He is also the Digital Engineering Lead for the Army’s Aircraft Survivability Equipment (ASE) Project Office under the DEVCOM Aviation and Missile S3I Division. When he is not teaching professional development courses at UAH and working to protect army aircraft and crews from missile and munition threats, he can be found rocking out with his band, Jonny & The Black Frames.

When I was a kid, I wanted to be an astronaut.

As a child in Detroit, Chad wanted to find his future in the stars and was fascinated by the idea of being one of the few to explore the final frontier. As luck would have it, while in Elementary school, his family decided to relocate, where else but to the “Rocket City,” intensifying his enthusiasm for all things space related.

“When I was a kid, I wanted to be an astronaut. I have always adored anything related to space travel and still to this day, believe humanity should continue the ultimate pursuit of space exploration. I do find it ironic sometimes how life has worked out for this space kid from the Motor City, moving to a city with the U.S. Space & Rocket Center in its own backyard. I do hope to one-day support a program at NASA so in a way, maybe things worked out as I originally dreamt.”

Despite his love of space, Chad ultimately did not pursue his dream of becoming an astronaut. As he grew up, Chad began to recognize and cultivate his love for music. Simultaneously, he became increasingly interested in the STEM fields, focusing on engineering and technology. After graduating from high school, he chose to pursue a Bachelor of Science in Engineering at the university that was the obvious choice – UAH.

“From an early age, I have always been fascinated with engineering and technology. Given Huntsville’s known connection to engineering programs, it only made sense to enroll at The University of Alabama in Huntsville.”

As long as you have the bandwidth to cover both professions, you can support a missile test event in White Sands New Mexico one month, and the next month take a week off from your day job to tour as a musician.

While attending UAH, Chad also worked part-time on Redstone Arsenal. Because of both the location and his ambition, Chad was able to network and establish connections that would later set the course for his career.

“While attending college, I would work most mornings at a coffee kiosk (Southern Wake-Up Espresso) owned by my mother Ginger Zolynsky, then attend class in the early afternoons. Throughout my Barista experience, I was able to network with several engineers and high-ranking DoD employees on Redstone Arsenal. From there I was able to secure a Summer Hire Internship and eventually a parallel Co-op position while I finished my undergraduate coursework. I started working for the Army full-time upon graduation, moving from project office to project office all the while growing my knowledge, skills, and abilities in Systems Engineering.”

In addition to opening doors in his professional career, the coffee kiosk also helped Chad connect with other local musicians, which fueled his passion for music.

“I recall serving a few customers who shared that while their day job was engineering, they still carved out time on weeknights/weekends to play local live venues, write music, and even play large festivals (such as the Big Spring Jam). I then realized both my creative and technical side can each have an outlet, and thus I decided to pursue music by playing guitar and writing original songs on my own.”

After Chad realized that his professional career and his musical interests didn’t have to compete, he began cultivating his musical talents.

“I would say the relationship complements one another actually rather well. I know personally I could not lead a life with only engineering as my specialty, and likewise I could not leave the technical/engineering side to solely become a musician. I believe that as long as you have the bandwidth to cover both professions, you can support a missile test event in White Sands New Mexico one month, and the next month take a week off from your day job to tour as a musician.” 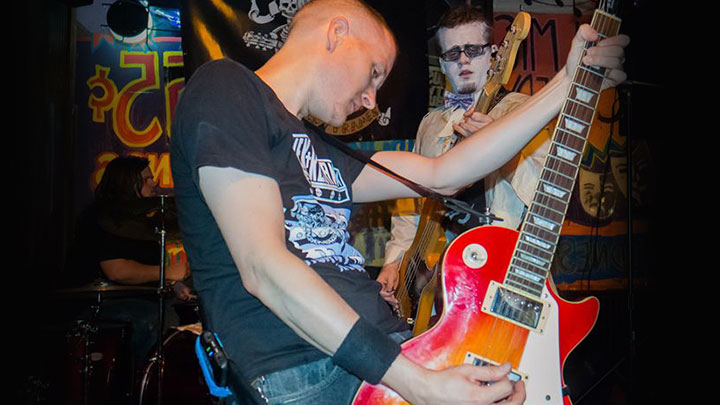 Jonny Yen (front) and Chad Zolynsky (back) are the founding members of Jonny & the Black Frames.

As he began progressing his engineering career, Chad connected with a colleague who shared his love of music. They began to collaborate and eventually formed the band now known as Jonny & the Black Frames.

“I met Jonny Yen in early 2012 while we both supported an Army Project Office on Redstone Arsenal, AL. Jonny and I would occasionally discuss music and other stuff going on in our lives whenever I stopped by his cubicle. He gave me a CD from his old band from San Antonio, Texas (which he swears I trashed) and I listened to it for a while before we decided to form a “White Stripes”-esque guitar/drums duo. We tried that out for a while until we felt a three-piece band was really the ideal direction we sought after, and that is when drummers like Ben and J joined the fray. We’ve got a lead guitarist whose name is Jonny Yen, and we’ve got a Bassist and Drummer prone to wear black framed glasses all the time… hence Jonny & the Black Frames. We consider ourselves a no-holds-barred, straight up, Rock ‘n’ Roll/Punk band and we wanted a name that was abrasive and contained no bells or whistles. We are primarily influenced by old school punk rock, early rock & roll, rockabilly, and 90’s alternative genres.”

After forming the band and finalizing their sound, they started touring.

“We have performed all throughout the southeastern United States, from Alabama, to Tennessee, Georgia, and Florida. Nevertheless, we are still planning on one day making the trek to Tokyo, Japan like Jonny has always dreamed of!“

Motivation for the Future

Now that Chad is established in his career and is pursuing his dreams in music, he hopes that he can influence others as he was influenced in his youth.

I hope that in some way I can inspire the next generation of split engineers/musicians.

“I hope that in some way I can inspire the next generation of split engineers/musicians that you can indeed have it both ways. In fact, one of my favorite band stories was playing the Sanctuary in Montgomery, Alabama. A father and his son joined us backstage to greet the band and get some pictures/autographs. The kid said that WE were his FIRST LIVE SHOW and I was his favorite. The music, the stage energy, and overall joy we showcased resonated with the kid and needless to say… it made the tour all the more worth it.” 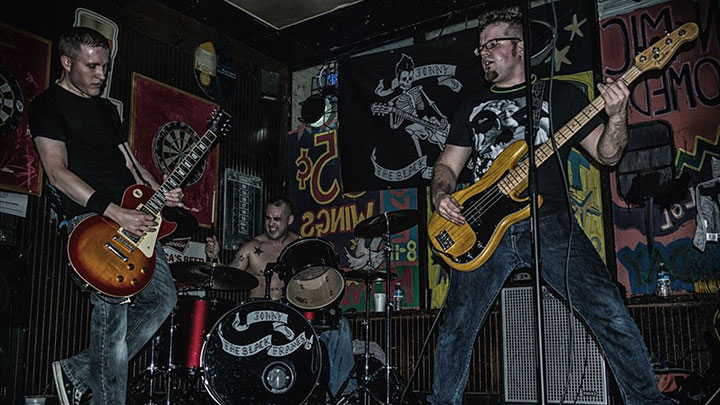 Despite the difficulties the nation has faced over the past couple of years, Chad is looking forward to the future – both musically and professionally.

“Career-wise, I look forward to further pursuing this newfound Digital Engineering effort with PMO ASE. Over the next several years, I hope we can truly evolve our approach to Government acquisition through the Model-Based Systems Engineering initiative. I’m also looking forward to guiding future UAH PD students through the easiest methods of DOORS Requirements Management, so that they can focus on the more difficult aspects of their duties, the ACTUAL technical engineering work. Music-wise, our band Jonny & The Black Frames is still kicking even after the YEAR that was 2020. Since lockdown and the vaccination movement, we have been mixing our third album release as well as writing enough new material for a FOURTH album. Our plan is to strike back as strong as ever in late 2021/early 2022 with a bevy of musical releases and live performances. In the meantime, I’ll continue to enjoy the extra family time during football season while coaching/watching games with my boys.”