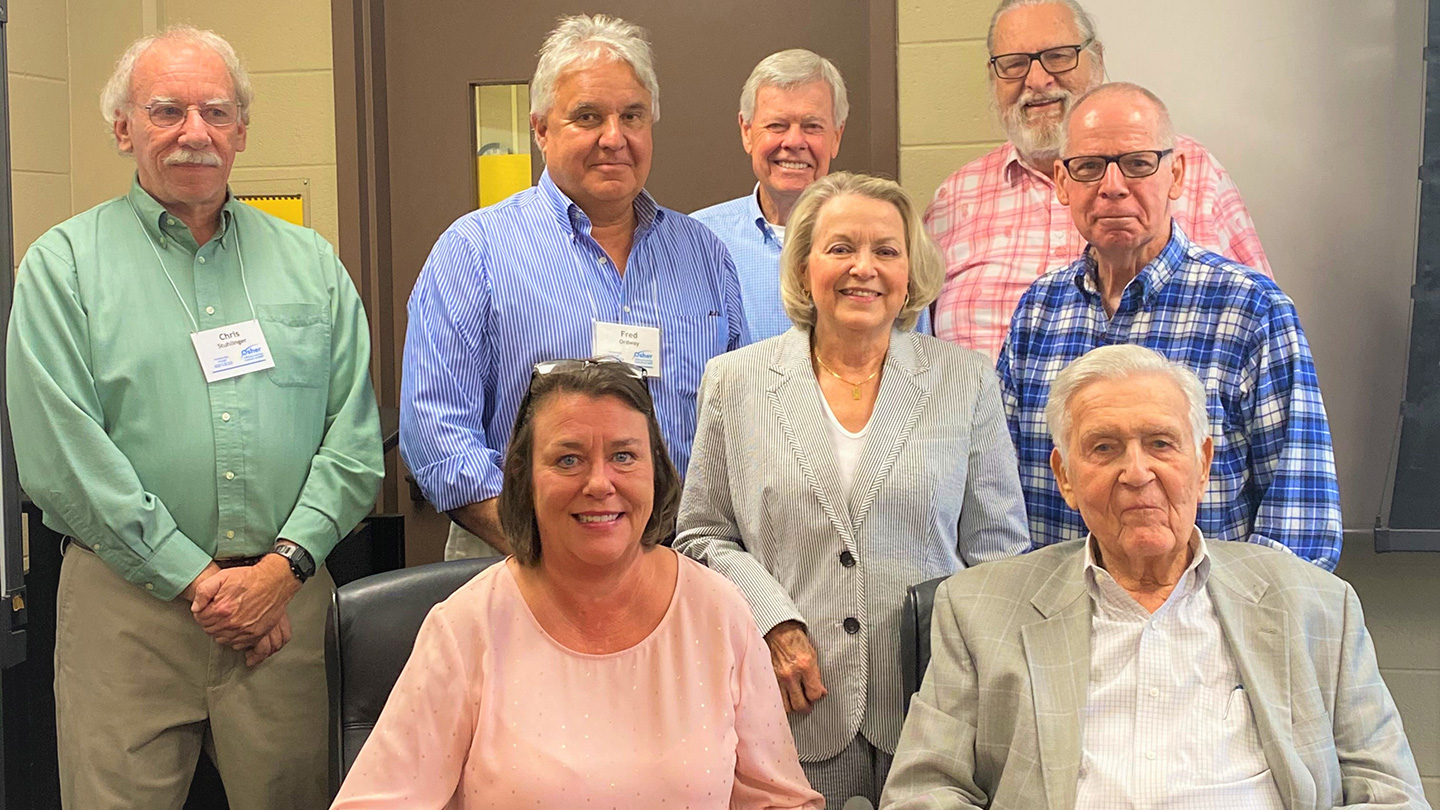 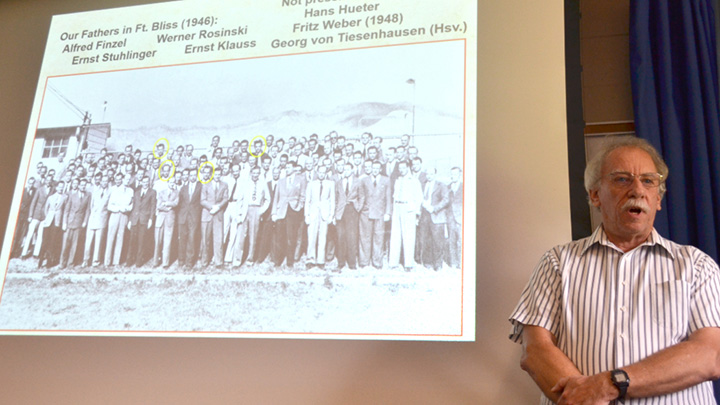 Chris Stuhlinger presents a picture of the Rocket Team upon their arrival in Texas.

Imagine growing up in a small southern town where rocket test firings rattle the windowpanes, and the school children hang out watching the smoke and fire knowing their parents were working on the extraordinary mission to land humans on the Moon by 1969.

That town is the city of Huntsville, AL, known as The Rocket City. To better understand the legacy and contributions of the original rocket team members and their families, The Osher Lifelong Learning Institute (OLLI) at The University of Alabama in Huntsville (UAH) members had the opportunity to attend a mesmerizing four-week course this summer titled The Experiences of the von Braun Rocket Team Families.

The course was organized and led by rocket team children Chris Stuhlinger, Heidi Weber Collier, and Rainer Klauss. Their fathers emigrated from Germany to be part of the Wernher von Braun Rocket Team. Guest speakers were friends of the course organizers who were also rocket team children (German and American). Special guest, Brooks Moore, attended the last session and shared his almost 30 years of experience and perspective as an American member of the von Braun rocket team.

Huntsville is where we are today because of the cooperation between the Germans and Americans to create a new life following World War II.

“Huntsville is where we are today because of the cooperation between the Germans and Americans to create a new life following World War II. In 1950, it was a small southern town known for its watercress production and cotton mills’’, said Stuhlinger. Today, Huntsville is a mecca for aerospace, defense, and technology programs.

The German influence is found everywhere in Huntsville. Their children are bilingual and many married Americans. Some settled atop Monte Sano Mountain, some nestled into the Blossomwood neighborhood, and others found homes in Colonial Hills and Darwin Downs.

While fathers and mothers worked diligently to create a new life, the children became part of the arts, sports, and culture of a growing city. They benefited from the founding of the Wernher von Braun Astronomical Society, the symphony orchestra, and the von Braun Civic Center. UAH transformed, offering graduate courses in engineering and science after von Braun addressed the Alabama Legislature, “It’s the university climate that brings the business. Let’s be honest with ourselves. It’s not water, or real estate, or labor or cheap taxes that brings industry to a state or city. It’s brainpower.” 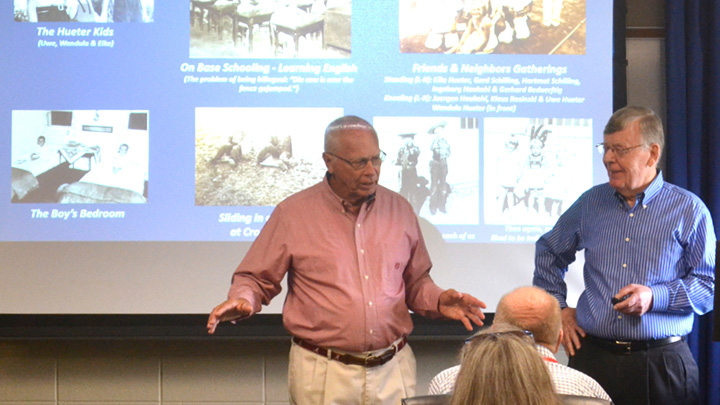 Klaus Rosinski (left) and Uwe Hueter (righ) share their experiences as children of the Rocket Team.

The genius and charisma of the German engineers was popularized through television and magazines encouraging the exploration of space in the 1950s. Ernst Stuhlinger, Chris’ father, advised Walt Disney about a Mission to Mars TV program, which was used to promote Tomorrowland at Disneyland.

From 1956 to 1960, Chris’ father worked as a physicist for the Army Ballistic Missile Agency (ABMA) coordinating research programs, conducting active research and the development of electric propulsion systems. In fact, he would help develop the scientific payload for America’s first artificial satellite, “Explorer 1’’, in 1958.

“We successfully accomplished our course’s main goal — rekindling an interest in the birth of America’s space program, both among OLLI members who participated and among our speakers,’’ said Stuhlinger. He further added, “As we researched and prepared our presentations, memories were re-awakened, and new information was learned and exchanged about how our families adjusted to life in the U.S. Who knows if our space program will again enjoy the glory years experienced during the 1950s and 60s, but we hope those memories will remain with us as we enter the next phase of America’s space exploration story.’’

To join this community of lifelong learners and participate in more courses like this one, visit Osher.uah.edu/JoinOLLI.  For questions, please contact the OLLI at UAH Program Manager, Ale Pacheco, at OLLI.info@uah.edu or 256.824.6183.