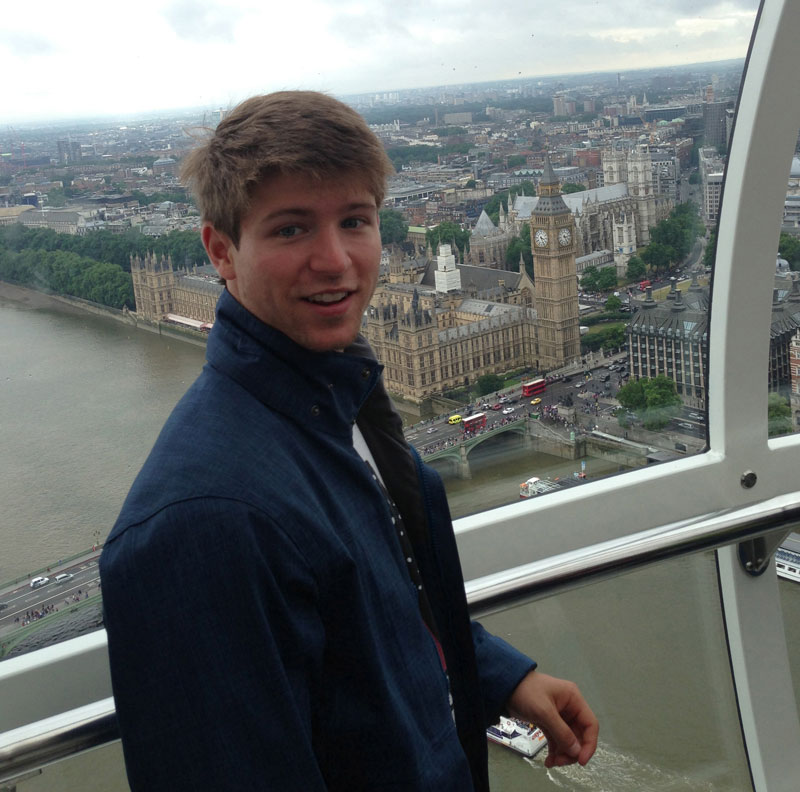 HUNTSVILLE, Ala. (September 13, 2013) - Taylor Presley thought he spoke pretty good French. After all, the junior at The University of Alabama in Huntsville (UAH) had been taking it since high school. But when he stepped off the plane in Paris this past June for a summer semester abroad, he found out otherwise.

"I was way worse than I thought when I got there!" says the Nashville, Tenn., native. "I hadn't spoken nearly enough to be confident." And while the adults were usually very helpful as he struggled to speak their language, the kids were another story all together.

"They were kind of mean - they just jeered at me," Presley says. "I didn't even know what they were saying at that point!" But after they had a good laugh, he continues, they usually did their best to figure out what he was trying to say.

And indeed, once Presley reached his final destination of Pau, his conversation skills rapidly improved. "English isn't a big language there, so I was immersed," he says. "It was pretty mentally tiring for a while, but that's why I picked Pau instead of the heart of Paris, where most people speak English."

It also helped that he attended French classes each morning during the weekdays at the Université de Pau et des Pays de l'Adour (UPPA), where he lived with forty other foreign students in a dorm - though not exactly the kind of dorm he was used to.

"I had a room to myself, so it was kind of like here at UAH. And I had to key into the building, so that was the same," says Presley. "But there was no air conditioning! So we were just sweating profusely, and the French people would look at us like, 'Why are you sweating so much?'"

Knowing another language in today’s globalized society increases your marketability.

Eventually, though, he grew accustomed to the heat. So when his dad arrived for a visit, it was Presley's turn to laugh. "He complained about it a lot," he says. "But there were big windows in his hotel, so he would leave them open 24 hours a day."

One thing Presley's dad was happy with? His son's newly acquired conversational skills. "It was pretty funny watching him try to communicate, so I got us around," he says. "He was proud; I feel like he thought I had grown up a little bit."

While he was there, Presley also did a lot of traveling, both solo and with the other UPPA students. "The train system was awesome," he says. "We went to Toulouse, Paris, Biarritz, the Pyrenees, and the pilgrimage town of St. Jean Pied de Port."

He even went to San Sebastián, a Spanish coastal city just a few miles over the French border - though that ended up being something of a mixed blessing. "I don't speak Spanish, so once again I was thrown into the pantomiming world!" he says laughing.

Yet despite all of his travels, Presley ended up with very few souvenirs. Perhaps the most meaningful is the bottle of wine he purchased in Bordeaux. "It's a bottle of La Dame Blanche," he says. "I gave it to my dad and we're going to open it when I graduate."

Perhaps they may even be toasting the start of Presley's career by then. The aerospace engineering major (and French minor) says he hopes his study abroad experience will set him apart from other engineers when it comes times to look for - and land - a job in the field.

After all, "knowing another language in today's globalized society increases your marketability," he points out. And even though he won't go so far as to say he's "crazy fluent" in French, he says he's "definitely improved."

And that applies not just to his language skills, but also to his worldview. "Living in and seeing a different culture changed my outlook," says Presley. "I've never been outside of my culture before, so I kind of thought there was one way to live."

But after spending so much time in another country, and adapting to another way of life, he says he realized "you can be happy living all kinds of different ways." Presumably just as long as those ways include air conditioning!