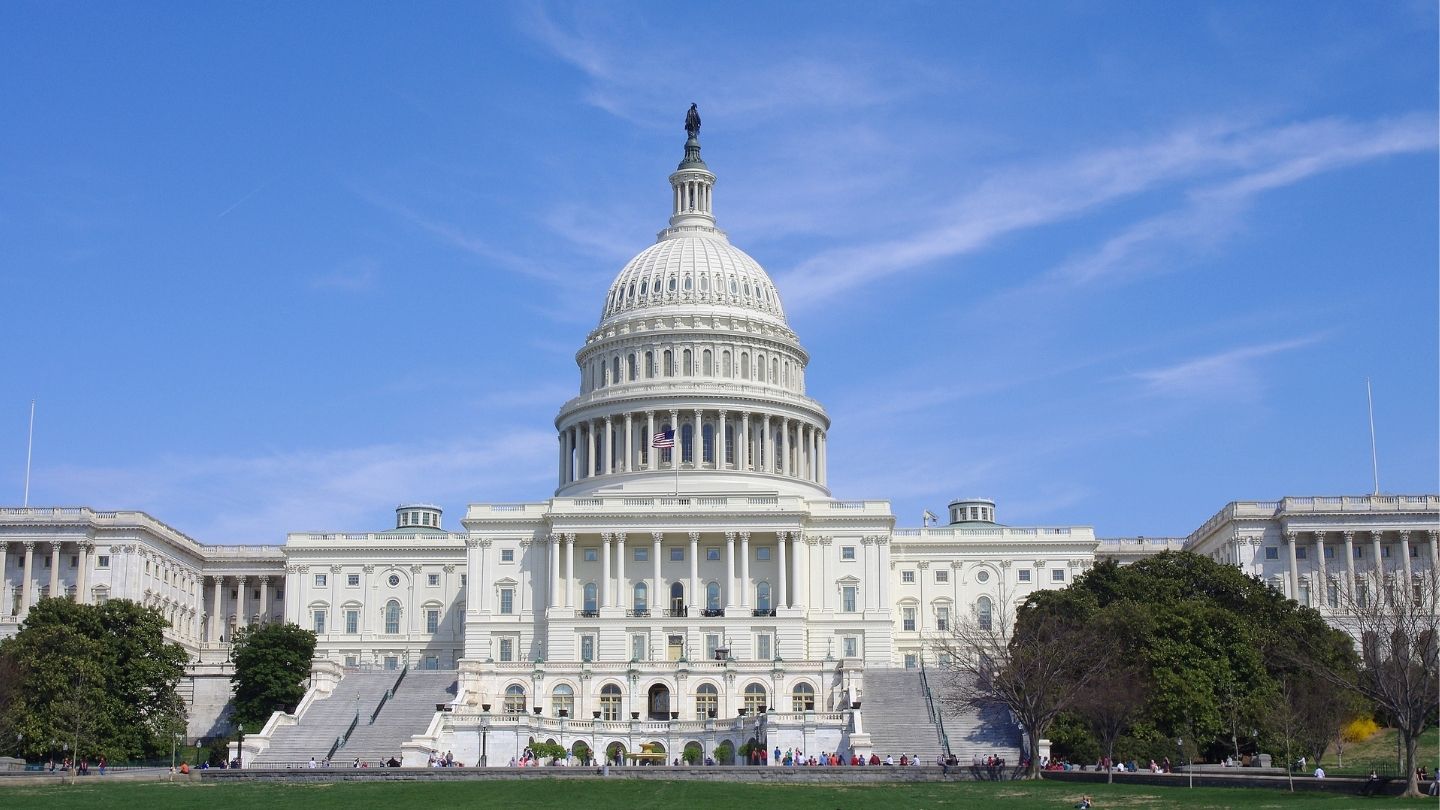 The Department of Philosophy and Political Science hosted the Spring Colloquium “Should the States Be Trusted: Critical Issues for Federal and State Governments” on Friday, April 9, from 12 pm- 2 pm in room 145 of Morton Hall. Students, faculty, and guests attended in-person and virtually by Zoom.

“POLITICAL TRUSTWORTHiness AT THE CROSSROADS: ESSENTIAL QUALITIES OF GOVERNMENT TRUST”

To illustrate failing in transparency, I present examples of vagueness in government in which the government is informed, but it withholds information from the populous, such as the UK’s opaque and unclear position on the appropriate Coronavirus response (Smith and Wanless 2020).

To Illustrate failings in intelligence, I present examples in which the government “[Did] not adequately collect and interpret intelligence information, make sound policy based on the intelligence... and effectively act” such as was the case on September 11th, 2001 (Gentry).

“PICKING SIDES IN THE WAR ON DRUGS: WHEN THE STATES GO AGAINST THE FEDERAL GOVERNMENT”

Brief Overview: This paper inquires into the changing relationship between the federal government and the states over drug policies and suggests the reassertion of dual federalism in the war on drugs.

Abstract: The war on drugs has four main objectives: the eradication of drug-producing crops, interdiction of drug smuggling, investigation and prosecution of drug traffickers, and penalization of drug users.(Miranda 1998) Since the Regan administration introduced the new drug policy, the states have worked with the federal government, but recently many states have decriminalized or legalized marijuana. Oregon has gone a step further and decriminalized small amounts of all drugs. This shift from the states working with the federal government to opposing the war on drugs may indicate a larger shift away from cooperative federalism and a resurgence of dual federalism.

“FAITH IN FEDERALISM: THE REPERCUSSIONS OF COVID-19 LONG-TERM ON FEDERALISM”

Brief Overview: Through the Covid-19 crisis, issues have appeared at every level of our federal system. Whether through political infighting, poor resource allocation or harsh mandates, America has more issues than just the virus.

Abstract: Nationwide, mask mandates and lockdowns started in March in response to Covid-19. We have recently passed the one-year anniversary of  “Two weeks to slow the spread”. The conflict between the Federal government, states, and the people, the assorted responses and lockdowns, and policy clashes has been the highlight of the news cycle for months and was likely the deciding issue in the 2020 Presidential election.  The long-term practical, economic and psychological effects of lockdowns and mask mandates have strained our nation even further. Suicides, overdoses, and mental illness have spiked. People are turning on their families, friends, and neighbors over whether to mask or not to mask, to distance or not to distance, and to vaccinate or not to vaccinate. The problems and issues tie not only back to the virus, but to federal, state, and local government response.

“FISCALLY FLOUNDERING OR CREDIBLY CONSCIENTIOUS: ARE THE STATES LIVING WITHIN THEIR MEANS?”

Abstract: In 1789, Secretary of the Treasury Alexander Hamilton asked Congress to consolidate the debt of all the states onto the federal level. His request was met with outcries that the states which managed their budgets most irresponsibly would reap the greatest benefits from the plan. Implicit in this argument was the notion that some state legislatures could not be trusted with public funds and would revert to irresponsible spending if they were relieved of their debts. Similar accusations are leveled in the public forum in the modern era, and scholars frequently investigate claims that individual state governments have failed taxpayers with overspending.

What is often not considered is whether states, on the whole, use their authority over public funds in a responsible manner. This question has enormous implications for how much leeway the states should be granted in crafting their own budgets. A poor finding for the states would demand the imposition of structural constraints for state policymakers. An encouraging finding would imply the usefulness of legislative flexibility in state fiscal policymaking. Such implications can provide guidance to voters on how best to ensure that their funds are spent in a reasonable manner and their descendants are not left with an impossible burden. By determining whether the states have previously met promised outlays with revenue, fiscally prepared themselves for economic difficulties, and created means to pay for promised future spending, one may determine if states can be trusted with fiscal policy as well as whether taxpayers and the federal government must act to prevent states from mishandling public funds.

Brief Overview: This brief identifies issues that perpetuate police violation of civil rights and possible steps the federal government could make to mitigate them.

Abstract: One objective with this brief is to examine how police unions and existing policies in state and local police agencies have allowed police to deny civil rights to citizens. The title is provocative, however, the intention is not to vilify the police, as there are many factors working against them such as an overbearing workload and training that does not prepare them for situations they encounter. States are too entrenched to change all of this on their own and urgent federal action is needed to reform state police practices and provide alternatives to the violence that is all too common today.

The three main objectives are as follows:

By achieving these objectives, a framework for an informed and robust discussion on this topic can be facilitated.

“THE HUMAN BODY AND THE GOVERNMENT'S PLACE: FEDERAL AND STATES POSITION ON ABORTION AND TRANSGENDER RIGHTS “

Brief Overview: This paper discusses federal and states position on abortion and transgender rights and the motives behind government actors.

Abstract:  Citizens regard government as institutions composed of actors who work for the betterment of society. From this perception, we develop the belief that our government can be trusted. But what if the ideas we believe were not well-founded and are instead just products of self-interested manipulation? This paper examines the role of government in abortion and transgender rights while questioning the motives of its actors. It explores the government's failure to separate state and religion, legislatures rooted in self-interest, and morals in politics.

With the rise of white evangelicals and conservatives in the Republican party, abortion and transgender rights have become prominent issues within and amongst the states. Women and Transgender people face the prospect of losing their autonomy over their bodies for the sake of two demographics morals. Debates between the right and left have created a hostile environment where consistent punitive federalism is displayed. There has been an increase in state legislatures surrounding the two subjects.

These actions were not mere coincidences. Instead, these are states' attacks on the federal judiciary rulings of Roe v. Wade and the extension of the Civil Rights Act of 1964, and the LGBTQ+ community. White evangelicals use religion to justify their anti-abortion arguments and states use conservative ideology to define morality for all. The conservative shift in the federal judiciary makes this an even more dangerous situation. Political actors aligning their beliefs to these ideas for the sake of votes. These factors create mistrust between the government and its citizens due to actors working for themselves rather than for the people.

“INVESTING IN AMERICA’S FUTURE: THE OUTDATED FEDERALISM IN RESPONSE TO EQUITY IN EDUCATION”

Brief Overview: This brief presents an alternative federalism model to update and improve education federalism and its current defunding of our public education system.

Abstract: The state of intergovernmental relations in regard to the American education system is and has been classist and polarized due to the state practices regardings funding and progress for the public education system. States may lag in implementing structural reforms that result in equity in public education, and investment and action protocol is in desperate need. States, under the model of dual federalism, hold a separate power over the education system which has resulted in a fall through among public schools ranging from grades K-12. Responses to education vary from state to state due to: nonacquiescence polarization, differences in state culture, budgetary constraints, and inequalities leading to stagnation in our public education system.

This duality of federalism is traditional and may work for some state-local-federal governmental relations but not for our education system. This system must be stable, litigation must be updated consistently and this can be done by updating our model to cooperative federalism. Cooperative federalism does not ask for complete control from the federal government over our public schools. However, it will allow the federal government to untie their hands and lay a foundation for education federalism. Because of this, intergovernmental relations will cooperate to create a stabilized education system across the nation; defeating the lack of equity and inaction by the states.

Photos from the Event: 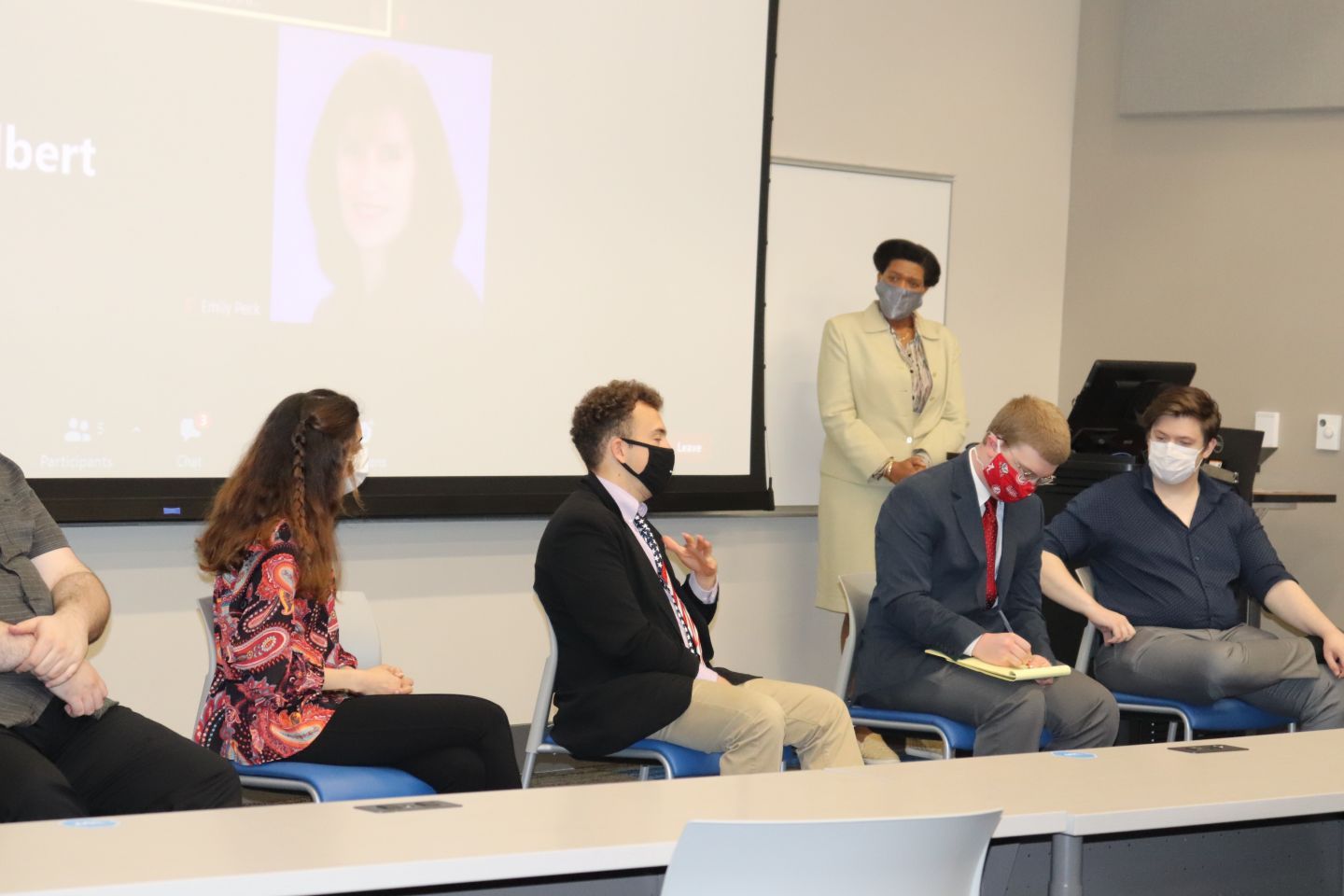 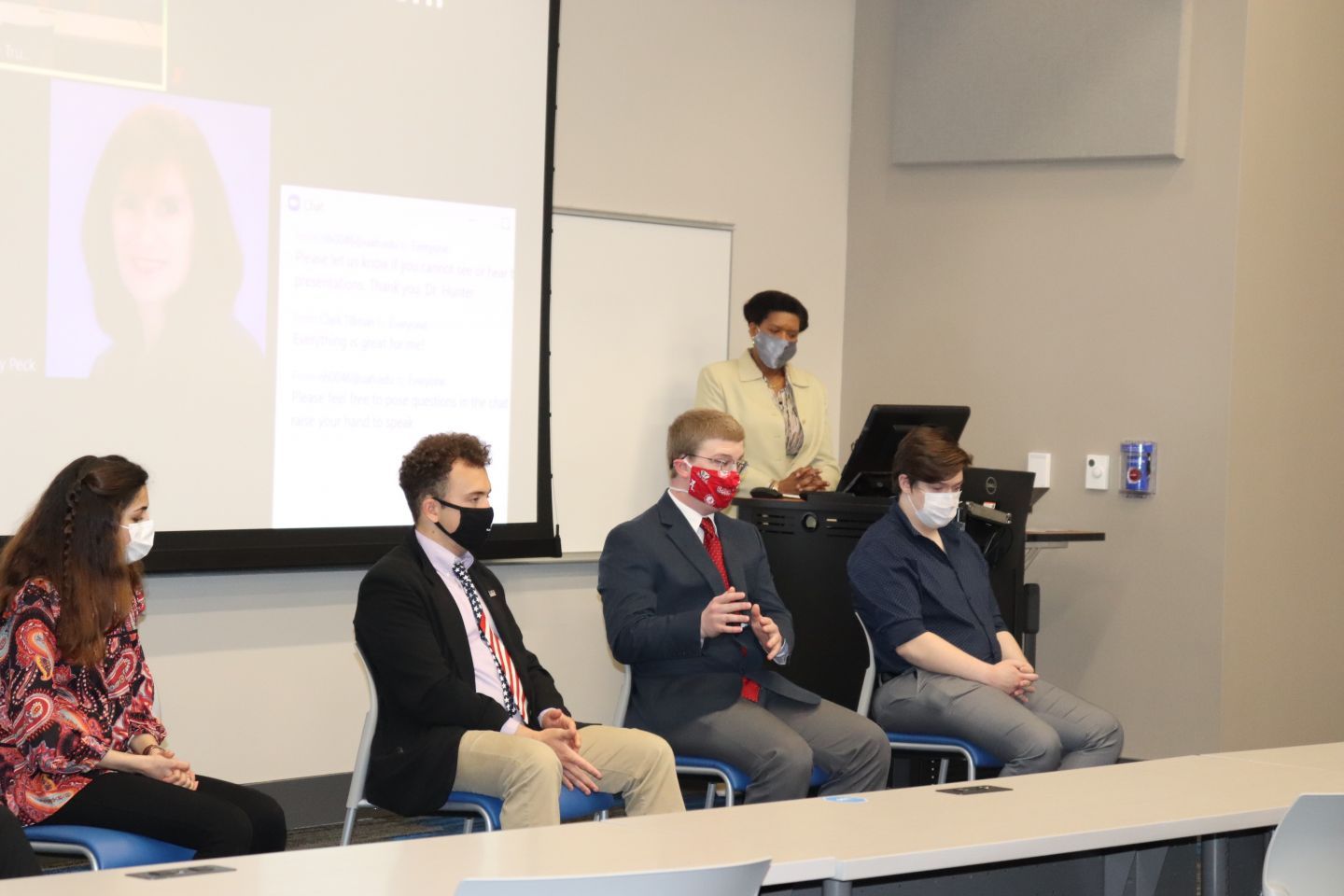 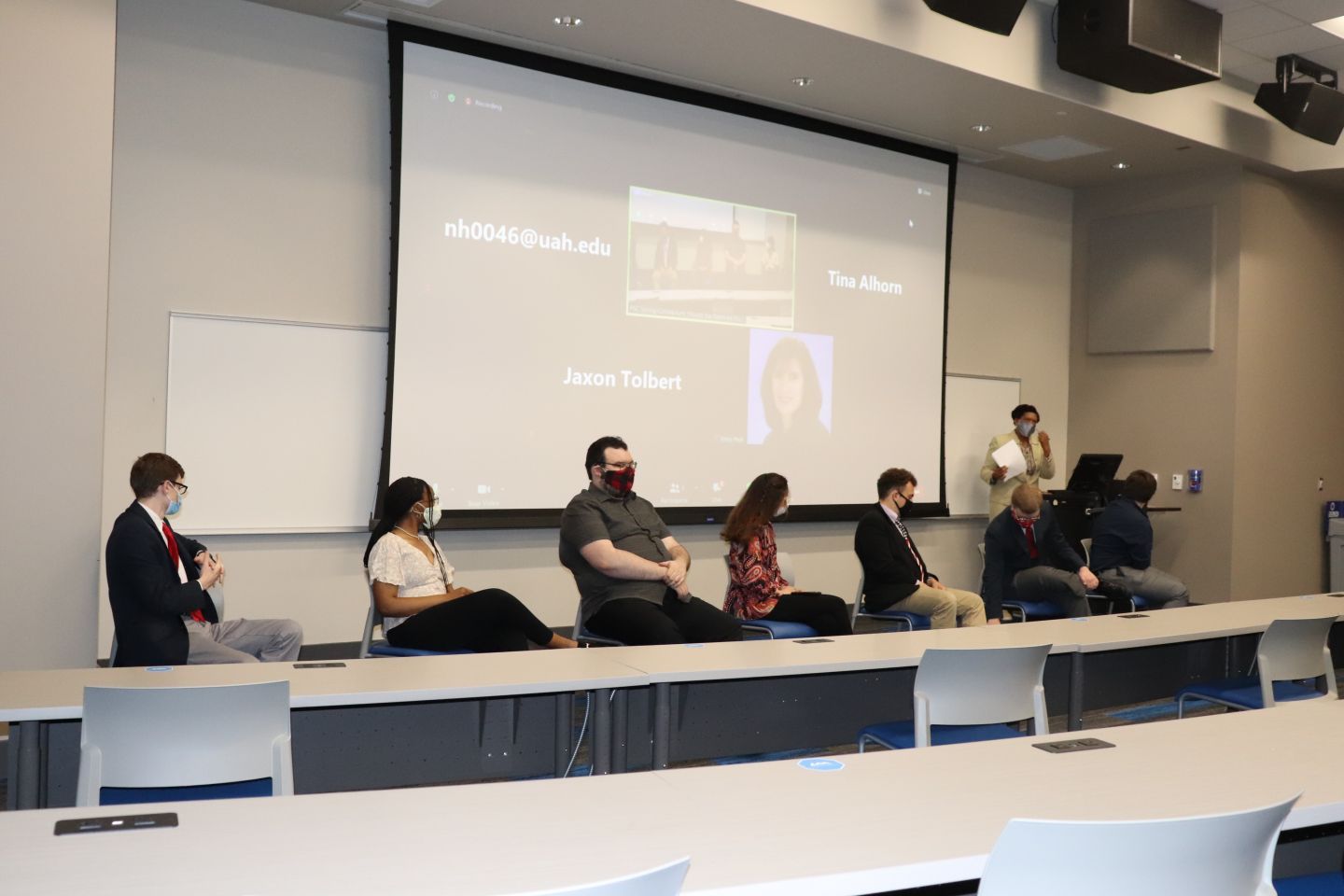 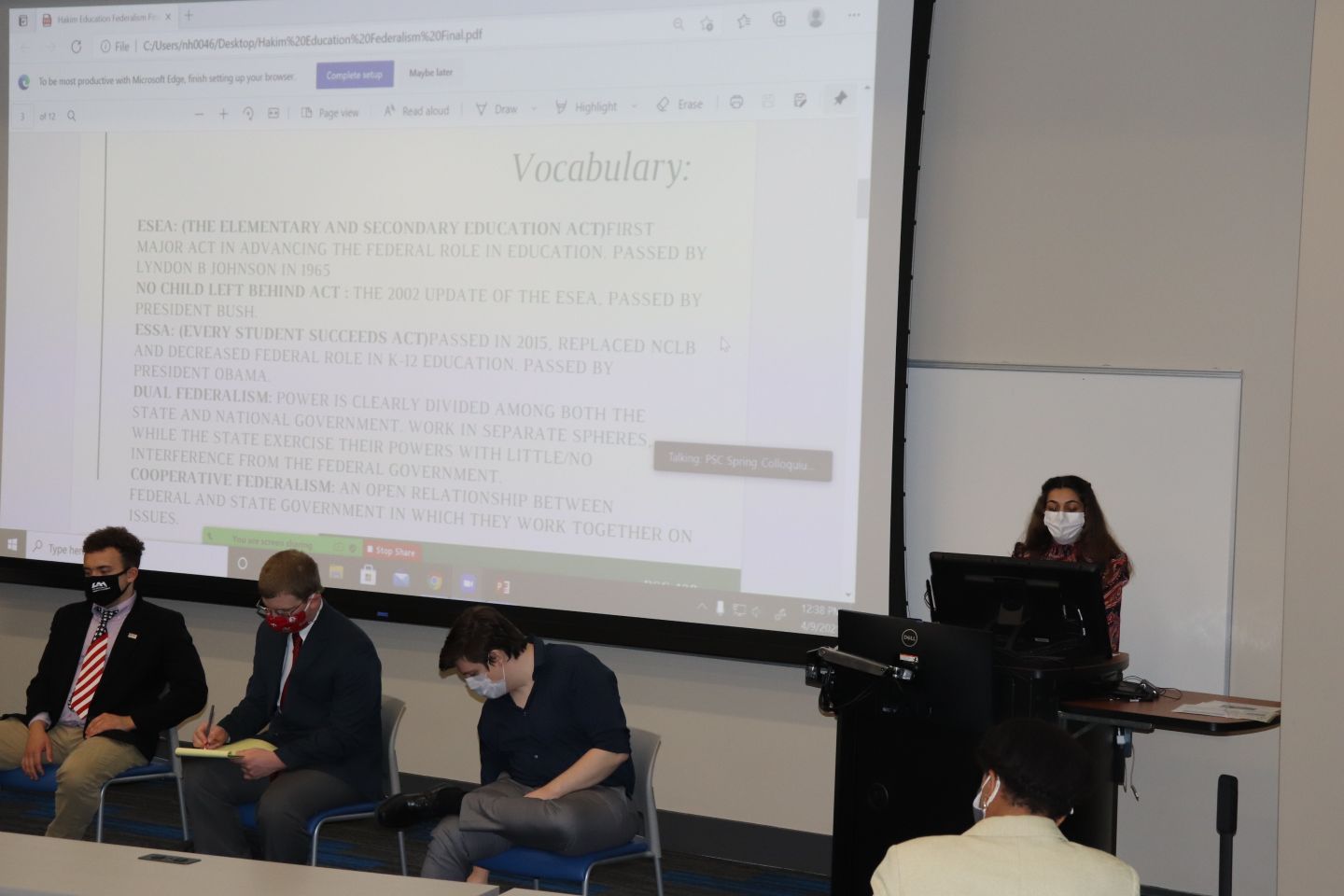 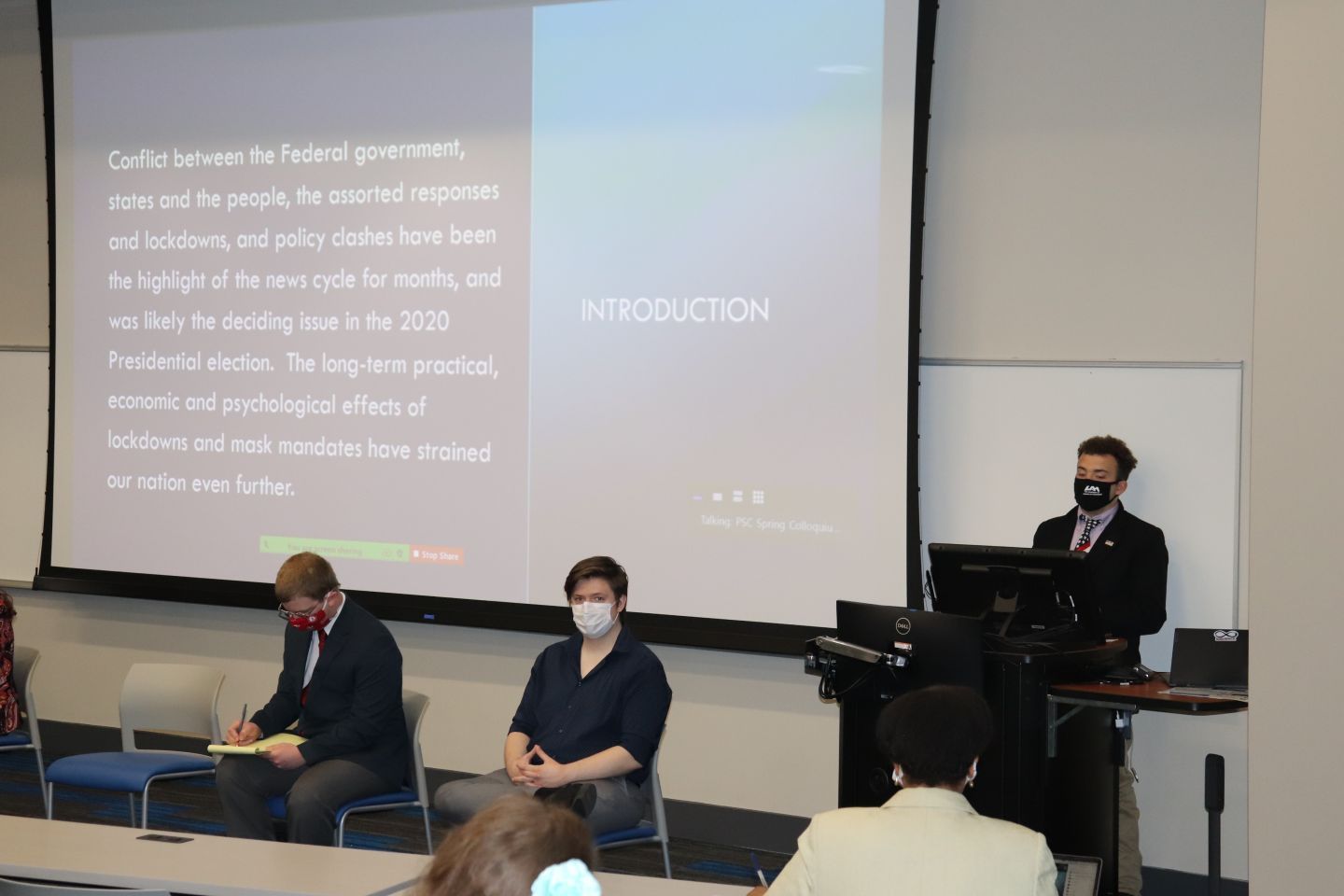 For questions about the colloquium, please contact Dr. Noelle Hunter at nh0046@uah.edu.